Skip to content
HomeMasum, a delegation of the House of Representatives of the protesters: No Nnjaz party duty and enforce the Constitution 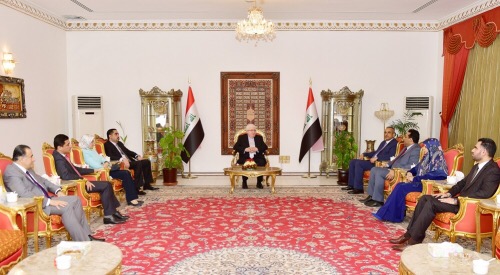 Search President Fuad Masum , at his home in Baghdad on Tuesday evening with a delegation representing the members of the House of Representatives of the protesters parliamentary crisis and ways to solve them.

According to a presidential statement received by all of Iraq [where] a copy of it, that the delegation of the House of Representatives of the protesters had “expressed appreciation for the role exerted by the President in order to overcome the current parliamentary crisis, stressing their keenness on activating the work of the parliament and confirm the legislative role and oversight in these circumstances that require the effectiveness of all constitutional institutions. ”

as the protesters deputies explained according to the statement , ” they are not against the party and are not in the process of removal of any component. ”

for his part , spoke infallible” for his vision and his role in the work to provide an atmosphere positive understanding among the various parties, and in the context of constitutional responsibility and duty as president of the Republic, “noting that” the protection of democracy and save the country ‘s stability and application of the Constitution in front of its responsibilities , which oversees the implementation in all honesty and sincerity. ”

and the president of the republic , ” the deputies of the protesters that this duty requires him to stand at the same distance from all parties, and non – aligned to a party any disagreement, “noting that” the only bias is to the Constitution and democracy, unity and stability of Iraq. ”

the infallible” keen to continue his efforts and his quest with all the capabilities in order to help reach the possible solutions and to provide an atmosphere positive understanding between different. ”