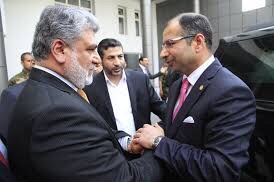 {Baghdad} Euphrates News Parliament Speaker Salim al-Jubouri on Saturday received, Diaa al-Asadi representative of the cleric Muqtada al-Sadr and discussed with him to find a way to reforms and resolve the parliamentary crisis map.

A statement by the Office of the al – Jubouri agency {Euphrates News} received a copy of it on that , “Saleem al – Jubouri , received Asadi and discussed with him to find a way to reforms and resolve the parliamentary crisis map”.

Mr al- Sadr issued a statement today said it on the three presidencies coordinate the parliament and provide ministerial cabin session characterized by the independent Baltknuaqrat without regard to the voices of quotas abhorrent taking into account the voice of the people and put it to a vote immediately and within a maximum period {72 hours} while retaining the sit -in inside the kiss of parliament popular attribution is unparalleled through peaceful protests, and to minister to resign immediately to pave the points for the first and it the people ‘s demands by clicking on the ministers and their headquarters to achieve this Almtalb.o on the Prime Minister to give time for pascal to correct the rest of the political process Caldrjat private bodies path and others that it does not exceed the duration of the 45 days.

saw parliament political crisis and sit deputies in the parliament and tried to hold a hearing to change the board chairman of the parliament but not completed quorum and adjourned until next Monday with parliament Speaker Salim al – Jubouri , was unable to hold the meeting because of the consequences and called for dialogue to emerge from the crisis , “.anthy