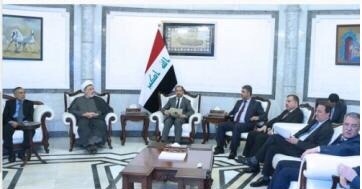 {Baghdad: Euphrates News} meet Parliament Speaker Salim al-Jubouri, and the heads of parliamentary blocs today, to determine the position of the cabinet reshuffle and the mechanism for dealing with it.

According to MP for the mass change parliamentary secretary Bakr told {Euphrates News} ” The meeting Parliament Speaker Salim al – Jubouri , with the heads of scheduled parliamentary blocs Anaakedh one pm will discuss, the cabinet reshuffle and the names of candidates and how to deal with it, and resolve the issue of the selection of candidates or nomination figures the political blocs. ”

he continued , ” the meeting will also discuss the mechanism of voting on the new candidates and how to deal with them. ”

it was House Speaker Salim al – Jubouri announced during yesterday ‘s session, the House of Representatives session for next Monday will put a timely manner to address Are we facing a new government lineup or modified ministerial to move to dealing with the names and consideration in the parliament. ” it is

noteworthy that, Prime Minister Haider al – Abadi handed over the presidency of the House of Representatives during the hosted meeting last Thursday, the ministerial lineup is composed of 16 ministers; included merging some ministries, to be discussed with the parliamentary blocs, while excluded ministries interior and defense of the amendment {timeshare present}, given the security situation witnessed by the country.

the House voted during its meeting Thursday, to achieve comprehensive reform of ending the State administration agency, which includes the bodies, agencies, ambassadors, and security positions during the month, to be resolved choice the new ministers who presented them the prime minister within 10 days, provided that the Council will continue its work to resolve the resumption of reforms, and to study the files submitted .anthy 1