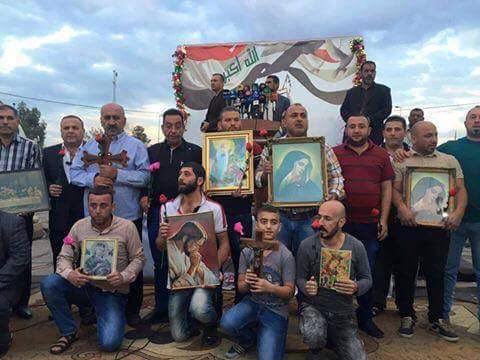 [Wayne – Baghdad]
Office of the Prime Minister Haider al – Abadi, announced that the Committee of Experts in the Prime Minister adopted the candidates presented by the Sadrist movement, in the selection of candidates for the new cabinet cabin.
A spokesman for the office , Saad al – Hadithi told all of Iraq [where] that “the Committee of Experts problem in thePrime Minister adopted the nominations and Trahaat provided Sadrist small blocks in the parliament, because most of the large blocs have not submitted their candidates.”
He stressed that ” the names given to these blocks annexed to the list of the Committee of experts and adopted within the parameters have been filtered, but does include a number of names given ?, something I can not assure you do, but all nominations submitted have been referred to the Committee and subjected to standards that are determined to be nominated from Admh..itba
http://www.alliraqnews.com/modules/news/article.php?storyid=34288

{International: Euphrates News} Upload head of the IMF mission to Iraq Christian Jooz, Tuesday, gangs} {Daash terror, continues to decline in crude oil prices, is responsible for the depletion of Iraq’s economic resources.
He Jooz in a press statement after the conclusion of the visit the IMF mission to Iraq after 12 days of talks with Iraqi officials, said that ” the economic situation in Iraq hasbeen traumatized as a result of armed conflict and oil, especially in the balance ofpayments, and income from the general budget.”
And made ​​bilateral meetings between representatives of the the Iraqi government, and the mission of the fund progress in reaching an understanding on economic policy, finance, and that can be supported through funding {credit}.
It will fund the mission during the coming period , according to a statement on assisting Baghdad in the debt burden, and take measures to protect the poor, and the introduction of reforms public finance, and improve the quality of public spending.
According to the international Monetary Fund , the rise in oil production has resulted in areas controlled by the Iraqi government to reduce the decline in the local economy, but the gap in the balance of payments of up to 5.1% of the deficit in GDP.
adopts budget Iraq by about 85% on oil revenues, prices of which have fallen about 70% since mid – 2014, where it is the combination {Brent trading} global below $ 40 a barrel currently.
this shrank real GDP in Iraq by 2.1% over the past year; because of the conflict with what is known as organized {Islamic state} terrorist outlawed in Russia, which led to the aggravation of deteriorating infrastructure, disrupting the movement of trade, and declining investor confidence.
at the end of last year , in 2015 caused a decline in Iraqi financial revenues, a drop in the country ‘s foreign exchange reserves worth 13 billion dollar, up to $ 54 billion.Ended h
http://alforatnews.com/modules/news/article.php?storyid=112845

[Wayne – Baghdad]
the House of Representatives will host tomorrow , Thursday , March 31 Prime Minister Haider al – Abadi.
According to the information department of the Council made ​​a statement received by all of Iraq [where] a copy of ” The council will host a session tomorrow Abadi, and completed the vote on the draft Code of Military Criminal Procedure Law, and vote on the final accounts for 2007″.
She pointed out that ” the Council will read the report and discuss the draft The second amendment to the law ofprivate investment liquidation of crude oil No. 64 for the year 2007, a report and discussion of the draft public holidays Act, and report and discuss the draft of the fourth amendment Act to the civil Aviation Law No. 148 of 1974 “.
The Prime Minister ‘s Office announced today that Prime Minister Haider al – Abadi will present its candidates for the Ministerial change on Thursday to the House of Representatives and the display of the vote and the vote ofconfidence.
he said Parliament Speaker Salim al – Jubouri today that front – Abadi “options only two either provide therequired specifications of the ministerial lineup as it deems appropriate for success and address the crisis or theformation of a government of technocrats comprehensive, and in both cases the House of Representatives is ready to create all the appropriate atmosphere for the success of the reforms. ”
the parliament gave the government introduces new Abadi his booth until tomorrow ‘s meeting or that he would withdraw his confidence.
http://www.alliraqnews.com/modules/news/article.php?storyid=34294

Tomorrow: PM Al-Abadi will submit the nominees for the cabinet reshuffle to the Council of Representatives

{Baghdad: Euphrates News} Information Office of the Prime Minister stressed, “The Prime Minister Haider al-Abadi will come back tomorrow ministerial cabin of the Council of Representatives.”
The statement quoted the Information Office of the Prime Minister received the agency {Euphrates News} a copy of it on Wednesday, said that “al – Abadi will present the ministerial change on Thursday to the House, as promised last week, and reinforce its resolve and determination to proceed with the ministerial change, comprehensive reforms.” He
also stressed Abadi in his speech yesterday that said the citizens what is going onfrom the bickering between politicians and the blocks around the sites and gains, and there are those who stand in the face of change, as announced in the media contrary.
the statement added that ” the Prime Minister, after being informed blocs importance to announce position , it will present the ministerial change tomorrow, and parliament has to up its mind to proceed with reforms, including the cabinet reshuffle , which called for him, and demanded by the citizen. ” Ended h
http://alforatnews.com/modules/news/article.php?storyid=112841

3 0 -3-201 6
Mr. Prime Minister , Dr. Haider al – Abadi provides ministerial change on Thursday to the House , as promised last week, and reinforce its resolve and determination to proceed with the ministerial change and comprehensive reforms also stressed in his speech yesterday that said the citizens what is going on from the bickering between politicians and the blocs on sites and gains , and there are those who stand in the face of change , while announcing in the media contrary.
Mr Prime Minister, after being informed blocs importance to declare its position , it will present the ministerial change tomorrow, and parliament has to up its mind to proceed with reforms, including the cabinet reshuffle , which called for him The demand of the citizen.

{Baghdad: Euphrates News} meets President Fuad Masum evening with Kurdish blocs to discuss the reforms.
According to an informed source told {Euphrates News} on Wednesday that the”infallible will meet this evening with the Kurdish blocs to discuss reforms of the new ministerial change.
The” political scene is witnessing a broad mobility between the blocks, with theimminent deadline parliament for Prime Minister Haider al – Abadi end of the day on Thursday to offer ministerial his booth. “End quote
http://alforatnews.com/modules/news/article.php?storyid=112834

He said logistical’s “Eye of Iraq News,” “The security forces have taken precautionary measures to secure areas of the capital Baghdad during the announcement, Prime Minister Haider al-Abadi new names of ministers during the parliamentary session scheduled for tomorrow, Thursday.”

“The security forces did not proceed so far to cut off any roads or ports in the capital, while noting the coming hours probably will cut some bridges or roads in Baghdad to prevent any security stagger to coincide with the imminent deadline, which gave it the parliament of Ebadi to announce the names of the new ministers replacements for the current expiration” .

It is said that the Board of Directors of Representatives voted on Monday to determine on Thursday deadline to announce the names of the Abadi covered by the new minister, ministerial change. Finished fourt

The chairman of the Investment Commission of Baghdad, Shaker al-Zamili, Wednesday, for the establishment of health projects and the creation of an investment map in cooperation with the Ministry of Health and the Municipality of Baghdad, as he pointed to a plan for the projects strategy within the petrochemical industries and oil industries in collaboration with the Ministry of Oil.

He’s Zamili / balances News /, that “there is work underway with the Ministry of Health to establish health projects for the production of certain medications attributing the cause to the ministry to import a lot of medicines and medical equipment that can be produced locally and which were previously produced.”

He pointed out that “there is another plan for cooperation with the Municipality of Baghdad to create an ambitious investment map includes various pieces and will be distributed on a range of projects to serve all segments of Iraqi society and community-Baghdadi, in particular,” explaining that “investment funds are from the private sector rather than the state income in the money only the facilities provided by the investment Law No. 13 of 2006, amended as well as through the facilities provided by the Authority of Iraqi and foreign investors. ”

And triple strands that “there is a lot of appetite from foreign companies despite the difficult security conditions, to lay the foundations for the projects could begin the next phase of the political situation after the end of the box and the security situation.”

He revealed “the existence of a plan for the National Commission for Investment Projects strategy within the petrochemical industries and oil industries in collaboration with the Ministry of Oil.”

He expressed hope that “there is a large role for the private sector and the Iraqi foreign and encourage investors and support”, calling for “activating the banking sector to facilitate the loans to investors, which is reflected positively on the economic movement in Iraq and in Baghdad in particular, to activate the various sectors.”

This was the Baghdad Investment Authority granted investment licenses to 341 projects, while noting that the project to build 130,000 housing units, said some of the other distributor within the health and tourism sectors and aspects of recreational and industrial. is over