Spent sitters first night in front of the Green Zone gates, and spotted a camera / balances News / dozens of them and they are lying after a long day describe as “Juma biting fingers” to begin the countdown to ten days will witness the “Battle of bone-breaking” until a cabinet reshuffle and reforms demanded by the street and support the cleric Moqtada al-Sadr.

Hundreds of people gathered in a large marquee in small tents they Althvon blankets ready and others Avcrashwa sidewalks in exchange for small tents.

Reporter / balances News / as monitoring the presence Mkh_khash tent for the treatment of exposed to fatigue among the protesters and was equipped with the required medicines and medical supplies in case of emergency.

A source in the sit-ins of the Commission stressed that the protesters were divided into meals and participate in 2000 Moatasem front gate of the cabinet only, one of the entrances to the Green Zone.

The source told / balances News / “The protesters against the rest of the Green Zone gates will be coordination and determine their numbers and divided into meals,” pointing out that “will be determined by the preparation of the protesters in front of the other gates also to keep organizing sit-ins.”

And spotted tents of protestors from the civil power and gathered dozens of activists.

The protesters began to erect platforms sit in front of the gates of the Green Zone, a few minutes from the security forces allow them to cross the bridge of the Republic.

Organizing Committee of demonstrations and sit-ins of the Sadrist movement called, on Friday, all the protesters who do not have business cards registered by it (Lepage) to withdraw from the sit-in yards.

The head of the martyr Sadr’s office in Baghdad, Ibrahim al-Jabri formation of a special committee to negotiate with the government in the event that the last wish.

Regulatory committee supervising and called on the sit-ins Msaoualjmah, to adhere to the unified slogans involving demands for reform and full cooperation with the security services and allowing them to exercise their functions, and charged the protesters to “wear uniforms by the Organizing Committee, which carries the slogan Iraqi flag.”

The cleric Moqtada al – Sadr called on citizens to exercise their lives and not feel scared, and called for opening closed in the capital , Baghdad , roads, and said that ” the prospects for change began and began nebula Balanakecaa , ” stressing not to allow any armed spread outside the security forces framework .

In the past, to say “do not close the roads and closed shops nor the other”, he stressed on the necessity of the continuation of “all work so that public interests do not stop.”

“It has been a great pleasure to visit Vietnam to see first-hand the vibrancy and achievements of this beautiful country.

“I wish to thank the Government of Vietnam and the officials I met during my visit for their hospitality and productive discussions. In particular, I wish to thank General Secretary Nguyen Phu Trong, President Truong Tan Sang, Prime Minister Nguyen Tan Dung, State Bank of Vietnam Governor Nguyen Van Binh and Finance Minister Dinh Tien Dung for their warm welcome and very productive exchange of views.

“I commended the government for its achievements over recent years, including establishing macroeconomic stability with high growth rates, integration into the global economy, higher living standards, lower poverty, and excellent progress towards its Millennium Development Goals. Our discussions focused on how to broaden and sustain these achievements through a second generation of reforms that continue macroeconomic and financial stability, accelerate structural reforms and further integrate Vietnam into the regional and global economy.

“Economic prospects for Vietnam remain favorable. Against this backdrop, I welcomed the government’s adoption of a more flexible exchange rate regime, and agreed that it would provide an enhanced external shock absorber that would help preserve macroeconomic stability and allow an accumulation of international reserves.

“I also encouraged the authorities to further strengthen the country’s fiscal position and resilience amid external volatility. A growth-friendly fiscal consolidation over the medium term would reduce the public debt-to-GDP ratio while providing increased space for important social and development expenditures. Accelerating reforms to the banking and state-owned enterprise sectors will help achieve greater economic efficiency and support higher robust medium-term growth.

“I had the great pleasure of participating in an engaging discussion with students at the National Economics University in Hanoi that highlighted the vital importance of job creation, skills upgrading, youth empowerment and entrepreneurship to help Vietnam reap the full benefits of its demographic dividend. I also had an inspiring exchange of perspectives with women leaders. Vietnam has made good progress on gender equality, and continued efforts will allow women to have a broader role in the economy, which in turn will help to raise economic growth.

“Once again, I would like to thank the authorities and the people of Vietnam for their warm hospitality and I look forward to continuing our close cooperation.”

Urgent: all entrances of Baghdad closed until further notice

Detailed talks in #Erbil with President Barzani on momentum against #ISIL and US support to #Peshmerga. #ISIS #Daesh 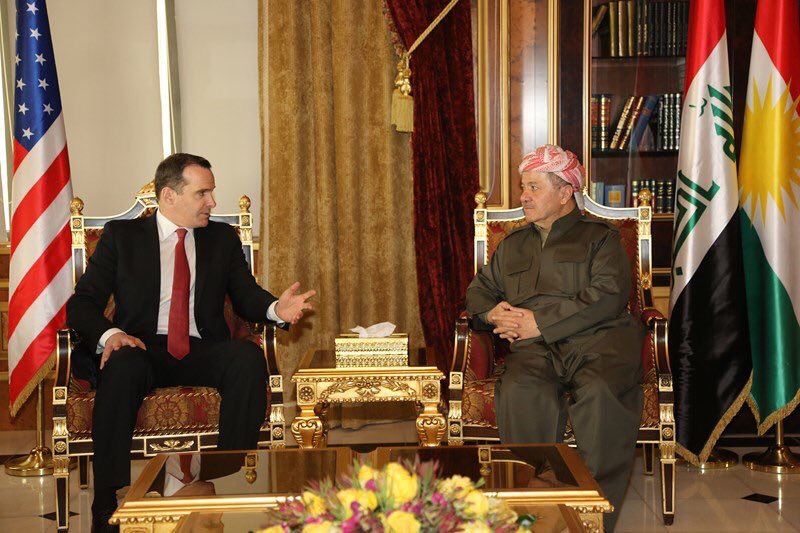 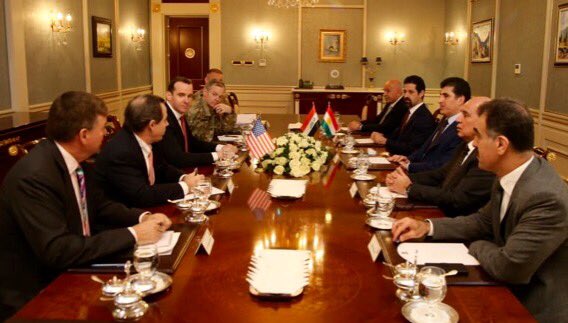 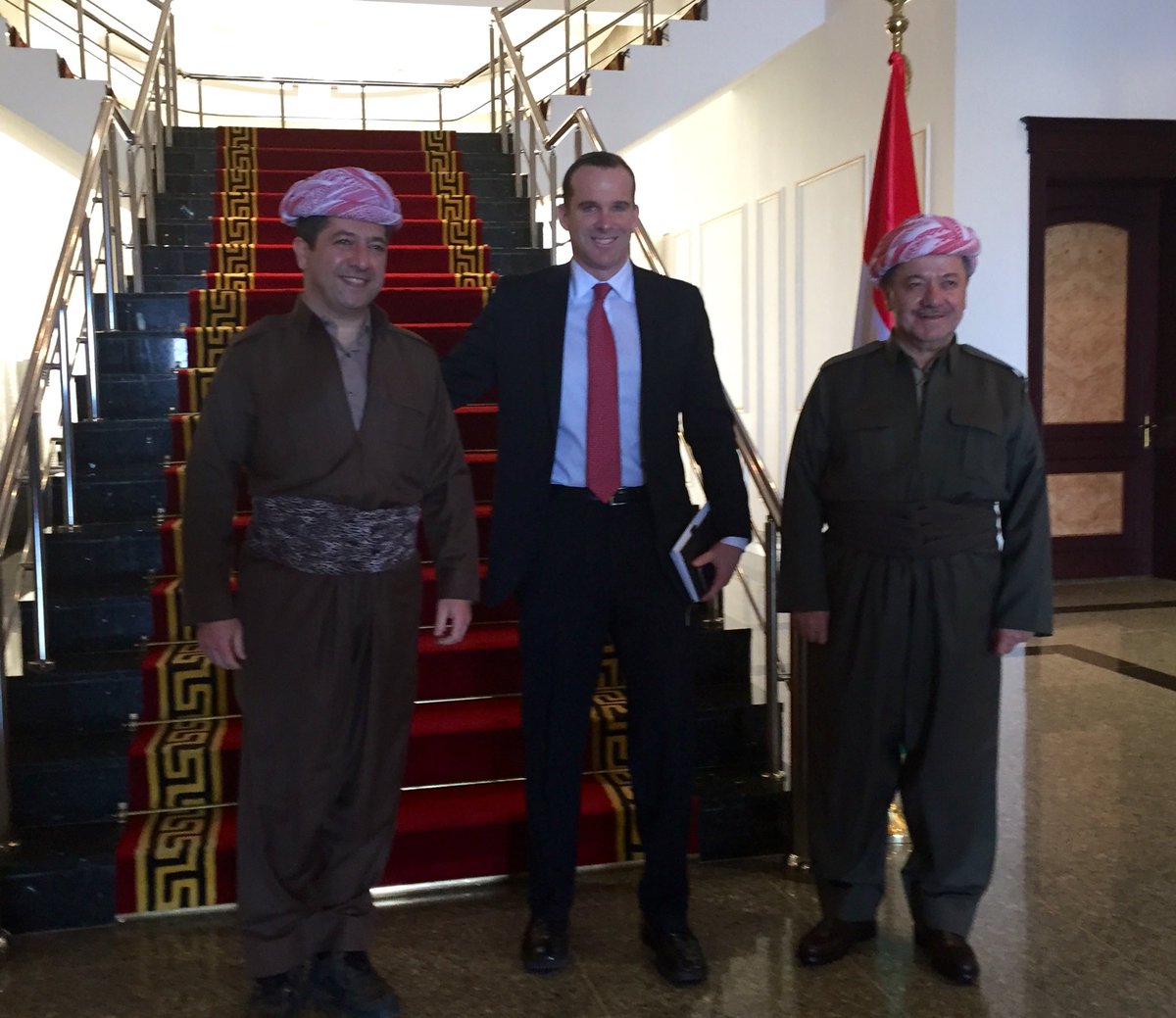 Called on President Fuad Masum, on Friday, the three presidencies to hold an emergency meeting on Saturday to discuss the current situation.

A source from the presidency of the republic for “tomorrow Press”, “The President of the Republic called Fuad Masum, the day, the three presidencies to hold an emergency meeting on Saturday to discuss the current situation in the country.

[Oan- Baghdad]
new Brett Macgork special envoy of US President Barack Obama , the international alliance against al Daash Friday Washington ‘s support for the Kurdistan region in various fields.
Kurdistan Regional Government, said in a statement that Macgork reiterated during a meeting with the Prime Minister of the Kurdistan region Nechirvan Barzani on continued US support for the Peshmerga forces.
The statement quoted Macgork say that the region suffered a difficult financial crisis and that his country was“acquainted with these difficult circumstances and that it will be studied in order to find ways to help Kurdistan in order to overcome this crisis. ” for
his part , he expressed the Prime Minister of the Kurdistan region thanks to the visit of US aid continued to Peshmerga forces hoping to expand this assistance and improved” because the region is currently going through a very difficult financial crisis and that he needs more than aid military and humanitarian point of view . “
with regard to the political situation in the Kurdistan region of Barzani indicated its willingness to address theinternal differences through and understanding with all parties to the dialogue and expressed the hope to reach appropriate solutions to all the problems in the near future.
the statement said that the US official and his accompanying delegation, including Ambassador United States to Iraq , Stuart Jones and a number of other officials dealt with during the meeting , the political and security developments in the region adjacent to the Kurdistan region and countries.
the two sides also discussed the latest developments on the battlefield against Daash and strengthen the coordinating Committee between the coalition forces and Baghdad and Erbil to the process of liberalization city of Mosul from the control of the organization .
http://www.alliraqnews.com/modules/news/article.php?storyid=33236

Khandan – said Colonel Steve Warren, a spokesman for the international coalition against al “Daash” terrorist, the latter in a state of so-called “defensive Aljthom.”

On the success of the international coalition against “Daash” and efforts which will enter its second year, Warren said Network (CNN) Alammerakh: “still Daash dominant force in a number of areas, but we must not forget that they have lost 40 per cent of these areas in Iraq, where they lost Sinjar and Ramadi, Baiji and Tikrit, where we see that Daash in a position to sit defensive as we call it here. “

And a declaration Russia withdraw its troops from Syria, Warren said: “We have not heard already about this and it was a declaration unexpected for us .. We are monitoring the situation at the present time to see if the Russians will what they said they would do, at a time when we are doing our job defeating regulation terrorist. “

He continued Warren: “At the beginning of the Russian intervention, between five to ten per cent of the air strikes were aimed at Daash, however, and since the start of the cessation of hostilities agreement noticed focusing their strikes on the organization.”

Re Baghdad operations, on Friday, to open blocked roads in the capital after being shut down since Friday morning, in conjunction with the invitation of the sit-in called by the cleric, Muqtada al-Sadr.

A source in the Baghdad operations for “tomorrow Press”, “it was to instruct the security forces to open all the road leading to and from the capital, Baghdad, after closing the morning to Dharoroat security in conjunction invite protest called by the cleric, Muqtada al-Sadr.”

He was a reporter, “tomorrow Press” has reported, on Friday morning, the security forces sealed off both, the Green Zone, and the entrances to Baghdad all, the East Gate area, Abu Nawas Street, Sadoun Street, Olive Street, the area of ​​fitness, Karada Mariam area, as well as shut down the road from Al Wathba Square towards the Liberation Liberation Square, in addition to the closure of Sinak bridge, and the bridge of the Republic, the square flying, street tents, with heavy security deployment in those areas.

Representative in Iraq, the financial crisis in light of the decrease in global oil prices

He met with Iraqi parliament speaker Salim al-Jubouri, the World Bank representative in Baghdad, Robert Abu quality, and discussed with him ways to support Iraq to confront the economic crisis.

During the meeting, they reviewed the economic reality and the role of the World Bank in providing support and backing of Iraq, especially with regard to the reconstruction of liberated areas from the control of the organization Daash.

The meeting discussed the arrangements for the visit of the President of the World Bank to Iraq and the preparations, and the scheduled end of the month.

Commander in Chief of the Armed Forces, Prime Minister Dr. Haider al-Abadi issue an order commissioned by the Joint Special Operations Command to impose security in Baghdad and delegated the necessary powers to do so.