US Ambassador to Iraq Stuart Jones said on Thursday he expected to raise between 10 to 15 billion dollars aid to Iraq, and while stressing the need for Iraq to free economy, it is his country’s determination to support Iraq announced during a meeting between the Group of Seven in Tehran after being identified fundamental reforms.

He spoke Jones, during his speech at the Fourth Forum of Sulaimaniyah for dialogue on the difficult financial situation that Iraq isgoing through now, pointing to the country ‘s need to find ” a free and diversified economy.”
Jones said , “Iraq is passing through financial position is difficult and Washington gave him a loan for military purposes , a $ 2.7 billion dollar, “adding that” part of that loan was allocated for the Peshmerga. ”

He said the US ambassador to Baghdad, saying that ” the United States granted $ 600 million in humanitarian aid for Iraq.”
He said Jones that “Iraq needs a free and diversified economy , ” explaining ” the importance of cooperation between thegovernments in Baghdad and the region in the non – oil economic fields.”
He predicted Jones’ collection of 10 to 15 billion dollars in financial assistance to Iraq , “stressing at the same time that it should be” looking at corruption as a crime and not to be tolerated. ”

Iraq has suffered from a severe economic crisis following a drop in oil prices since 2014, and the pressure of exorbitant military costs of the war on the organization Daash, as well as the displacement of millions of citizens from their areas because of the fighting.

US Ambassador to Iraq, said that “Iraq has identified fundamental reforms in the Group of Seven meeting in Tehran will be support for Iraq.”

He pointed to what he described as “many of the participants between Baghdad and Erbil, which make great opportunities to raise imports territory after coordination with Baghdad.”

He said the US ambassador: “We have studies and debate in America about the work of the American Chamber of Commerce in Iraq, it needs the appropriate environment and security not only .. Iraq is an important partner and we are working with him.”

And it takes place under the supervision of the International Forum of Sulaymaniyah regional and Research Institute at the American University and was attended by many political figures in Iraq and the Kurdistan region and the world, and was the first forum held in March year 201,312 entitled “The geopolitical changes in the Middle East.”

[Oan- Baghdad]
voiced British Foreign Secretary Philip Hammond said Thursday his country ‘s readiness to support theKurdistan regional government ‘s efforts to pass the financial crisis experienced by “pointing out that” the region in front of a great economic opportunity for the advancement of its economy. “
This came during a meeting with his accompanying delegation , the Prime Minister of the Kurdistan region Nechirvan Barzani and some Kurdish officials in Irbil
, he said the Information Office of the Kurdistan Regional Government said in a statement , “It was discussed during the meeting to strengthen relations between the two sides and the war on organizing Daash and victories achieved against him and supporting reforms in the economic and political sector and administrative in theregion. ”
the statement quoted Hammond as saying” it is thanks to the Peshmerga forces efforts to repel and defeat theattacks and the risk of terrorists and harboring and providing services to a large number of refugees and displaced persons to earn the Kurdistan region of mission at the level of Europe and the world stature ” andexpressed hope that the Peshmerga forces could play a role significantly in the liberation of the city of Mosul plan.
in turn , expressed Barzani expressed his thanks for the visit of British assistance to the Kurdistan region and thePeshmerga forces once again to emphasize that because of the financial crisis and the advent of huge numbers of refugees and displaced survivors, the Kurdistan region need more than before the international community ‘said.
it was Hammond arrived in the region Thursday and held a meeting with the President of Kurdistan , Massoud Barzani and discussed with him several issues of common interest.
Britain has many military trainers to train in the Kurdistan Peshmerga forces.
http://www.alliraqnews.com/modules/news/article.php?storyid=33188

The head of Parliament’s office in a statement: “Tomorrow Press”, a copy of which received the “al-Jubouri, received at his office, on Thursday evening, the World Bank representative in Iraq, Robert Abu quality During the meeting, they reviewed the economic reality and the role of the World Bank in providing support and backing for Iraq especially terms of confronting the economic crisis and the reconstruction of liberated areas. “

The statement added that “the meeting also witnessed the search arrangements for the visit of the President of the World Bank to Iraq and planned end of this month and preparations.”

Receive World Bank representative in Iraq, and to discuss the economic situation and the role of the World Bank in providing support and backing for Iraq. 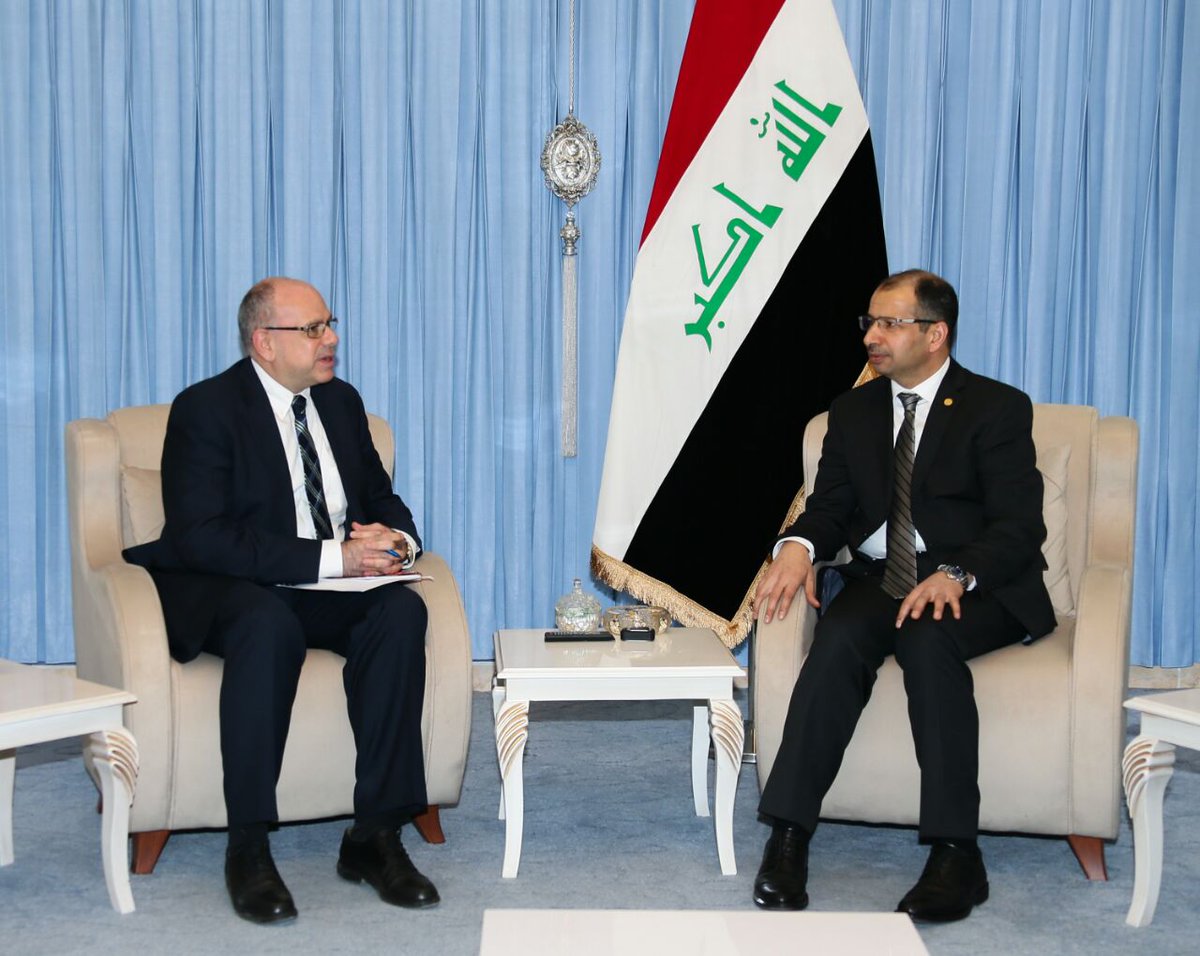 {Najaf: Euphrates News} described the cleric Muqtada al-Sadr, the Green Zone, as a stronghold of support for corruption, and he will pursue other methods is the sit-in, saying “it would be effective for at least sit impact and useful.”

Mr. al- Sadr said in a statement the agency {Euphrates News} received a copy of the protestors, I was “not blood .. .. No retreat no surrender to Asaddam .. .. .. not a weapon to cut off roads .. no .. not attack disobedience responsible for sit – committees .. No corruption .. no spoilers .. not a sectarian .. both to hear rumors .. Yes to organize .. Yes to cooperate with the security forces .. Yes to continue the sit .. Yes to the homeland .. yes to reform , yes to unity .. Yes to sanity. ”

He added “all of this and others will be constants of the protesters who will be staging a protest sit peacefully in front of the green Zone gates, which is considered a stronghold of support for corruption often, and will not deter us from it any rumors or any threat, Vaatsamna for the home, and will not be harmful to non – spoilers.”

He continued ” Dear sitters your desired sanity and not to be dragged behind the provocations, Vaatsamna in order to save the nation and not for saddling in the mud of blood, and traced back to scratch .. sit – for the people, and the return of his rights. ”

He said al- Sadr” Today Natsam in God, and love of the homeland; to show the world Collect over Anillatna, and our organization, and our love for peace, peace, and Taklna in front of all fears, and repudiation of violence .. and when it is said to you Return nor Tatsamua not say a word does not really do, but once we’ve reviewed it, we have fellowship is sit other methods will dazzle all the peace – loving, but and democracy, and it will be active for at least sit impact and useful. ”

and went” together to be ready for tomorrow with all the material and moral preparations, and our commitment to the full and comprehensive commitment to each security teachings, and administrative and organizational plan you supervisory committee, perhaps sit – long .. and everyone Siatsam you all of the nation and to the world, does not penetrate the souls of doubt, or boredom, and does not preclude Aatsamkm display, or disease, or rumor, or fear, or any worldly something else, even employees who Athlon integrity obliged to sit , but whose hands are iniquity and corruption. ” Ended h

Parliament Speaker Salim al – Jubouri announced that the Secretary – General of the United Nations Ban Ki – moon and World Bank President [Jim Yong Kim will visit the parliament within the framework of their visit to Iraq by the end of this month of March.

Jubouri said in a parliament session today that officials “will visit the House of Representatives in the 26th of this month , and attendance at the meeting of the Council to view developments in Iraq and the region developments.”

The head of the United Nations Mission in Iraq , Jan Kubiš revealed in 13 of the last month for a planned visit by the Secretary-General of the UN United Ban Ki – moon and World Bank President Jim Yong Kim to Baghdad “to discuss further support Iraq and its support under the current circumstances.”

{Baghdad} Euphrates News confirmed the Supreme Islamic Iraqi Council, said that “peaceful demonstrations and sit-ins aimed at achieving those reforms is the right of my people, and the practice of democracy, guaranteed by the Constitution and the law in contexts known as” h .. To be continued …
http://alforatnews.com/modules/news/article.php?storyid=111695