Twilight News police and a local official / she said that three of Iraq’s presidential guard were kidnapped on Friday near a checkpoint run by Shi’ite gunmen near the town of Tuz Khurmatu in the north of the country.

Police said four other people, including a government employee were killed in separate incidents in and around the town. Located Tuz Khormatu- experiencing a surge in violence in the months Alojerh-, about 175 kilometers north of Baghdad.

He grew up among the paramilitary forces from the Kurds and Turkomen Shiite alliance against al troubled Islamic state since the expulsion of the organization of cities and villages in the region in 2014 with the support of US-led air strikes.

The tensions between the two sides an additional threat for Iraq, which is struggling to contain the threat of the Islamic State, the biggest security threat since the overthrow of the US-led invasion of Saddam Hussein in 2003.

And hindered the ethnic and sectarian tensions and disagreements efforts face regulation.

Said Mehdi Taqi of the Council of Salahuddin province, where the fall of Tuz Khurmatu The members of the Presidential Guard were traveling in a private car heading to Baghdad when they were abducted by unidentified gunmen near the middle of the day, a member of. Police confirmed in Tuz Khurmatu information.

In a separate incident, gunmen opened fire on a car carrying guards for the Ministry of Electricity, killing one person and wounding four others seriously injured, police said.

Three civilians were killed in two separate incidents and kidnapped two others.

[Baghdad-where]
Iraq welcomed the cease-fire in Syria’s decision.
It was Syria’s support group adopted at its meeting yesterday in Munich issued a statement providing for a ceasefire and resolving humanitarian issues and launch a political process in Syria and to hold elections within 18 months.
The welcome Iraq during a meeting with Prime Minister Haider al-Abadi, Deputy Secretary General of the United Nations on the sidelines of the Munich conference on security.
A statement by the prime minister, said al-Abadi “expressed appreciation for the humanitarian efforts of the United Nations in Iraq, and its role in seeking to bring about security and stability in the region.”
Welcomed Abadi through a meeting with Deputy UN Jan Ellison initiative of the Munich conference for a ceasefire in Syria, calling for the implementation on the ground as an important step and resorting to a political solution, and they discussed the results of Munich security conference and its reflection on the security and stability of the region and the world.
for his part, Ellison congratulated the victories achieved by the Iraqi forces, expressing appreciated the efforts of the Iraqi government to protect civilians and their quest to restore stability to cities liberated.
He expressed concern for the deteriorating humanitarian situation in Syria, declaring the UN’s determination to launch a relief program if the cease Nar.anthy
http://www.alliraqnews.com/modules/news/article.php?storyid=30033 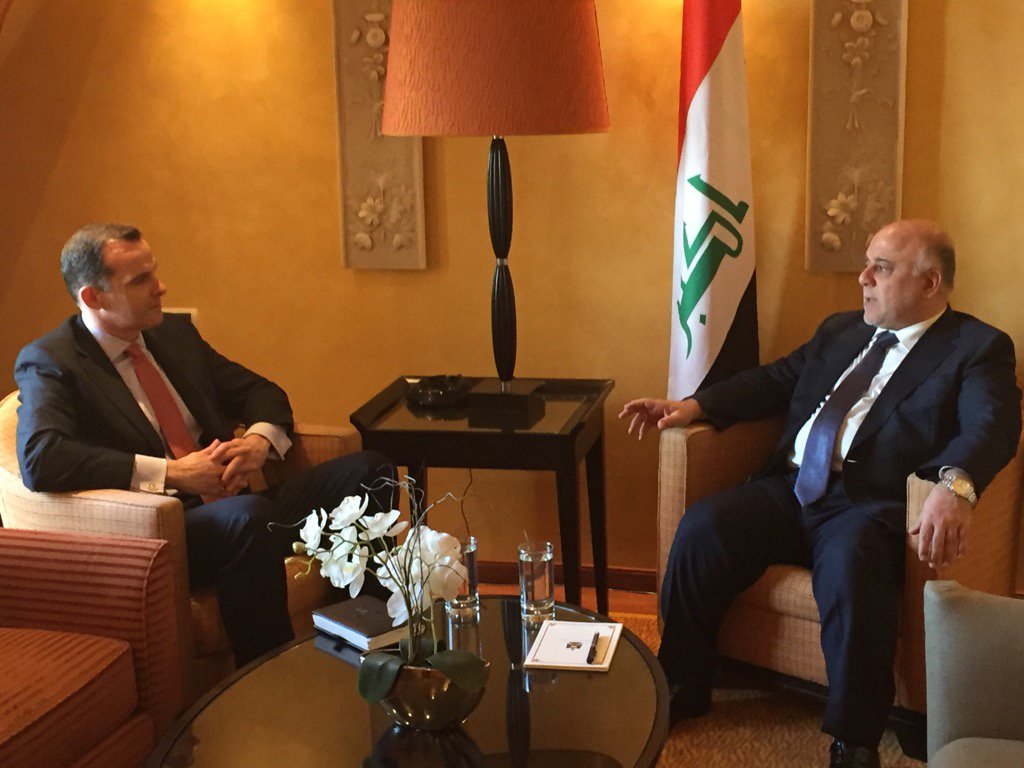 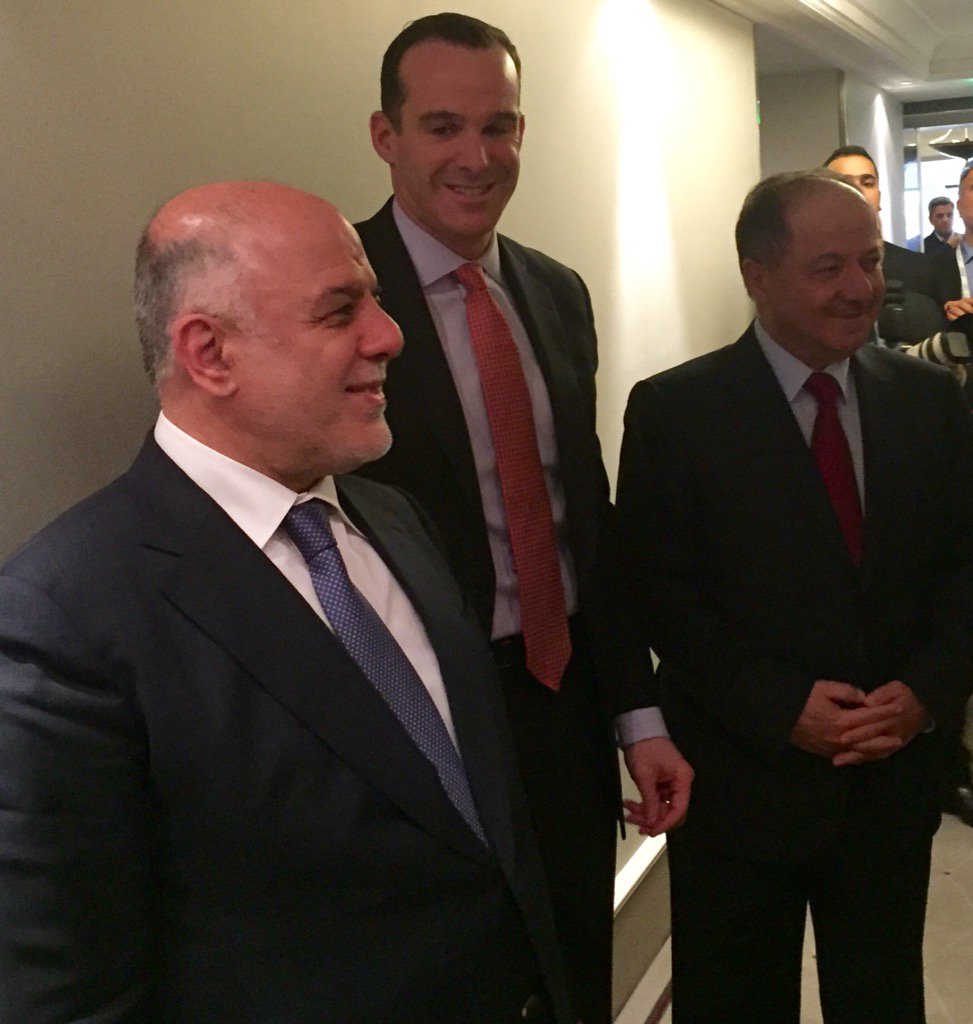 During the meeting, they discussed the development of bilateral relations and cooperation between the two countries and the war against Daash Mahakgueth and Iraqi forces of victories, and ways to achieve security and stability in the region.

{Baghdad: Euphrates News} Prime Minister Haider al-Abadi discussed with the President of the Kurdistan region, Massoud Barzani, many of the issues between the federal and Kurdistan governments and work to resolve them.
A statement of the prime minister’s office and the agency {Euphrates News} received a copy of it today, “Prime Minister Haider al-Abadi, received Friday in Munich, Germany, the President of Kurdistan, Massoud Barzani, were discussed during the meeting a number of issues between the federal government and the Kurdistan region and work to resolve them and the continuation of meetings between officials. ” He stressed Abadi, during the meeting on” the need for concerted efforts to defeat Bdaash and purge the rest of the usurped cities, particularly Mosul and cooperation for Iraq overcome the financial crisis. ” He added,” we look to the higher interests of the country in reforms, economic measures, and we look forward to Iraq would emerge from its crises stronger than before, “.anthy
http://alforatnews.com/modules/news/article.php?storyid=108555 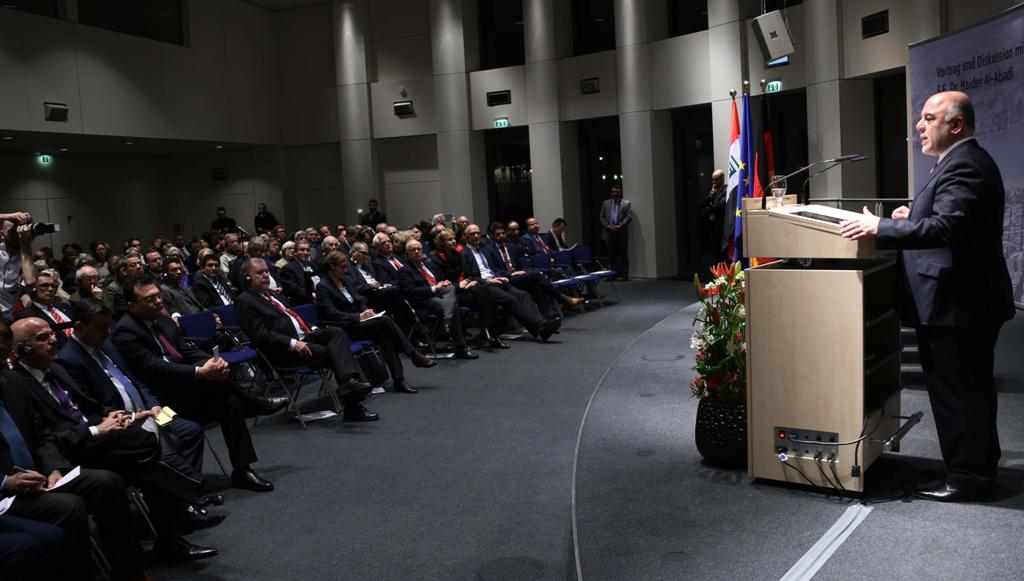 Participates President of Kurdistan region of Iraq in the conference which will be attended by representatives of various countries around the world to discuss ways of cooperation and coordination to enhance security and counter terrorism, which poses a threat to the whole world.

The Abadi arrived, in the (February 10, 2016), to Germany to participate in Munich Security Conference, met with German Chancellor Angela Merkel and President of the German Parliament.