According close to Parliament Speaker Salim al-source, on Wednesday, that the latter arrived in the UAE on a surprise visit.

Said the source, who declined to be named: “The House Speaker Salim al-Jubouri, arrived on Thursday evening, in a surprise visit to the United Arab Emirates capital Abu Dhabi to meet with officials Lamartine,” he did not disclose further information regarding the visit Jubouri.

On the other hand, the source stressed that “al-Jubouri, will direct a formal letter from the chairman of the parliament to the Prime Minister Haider al-Abadi on ministers to be change them, and inquire about the reasons behind the alterations and ministries are to be merged.”

BAGHDAD / Baghdadi News / .. revealed the US special presidential envoy to the international coalition to fight al Daash terrorist Brett Magherk, Wednesday, for actually start editing the northern city of Mosul by cutting off communications and supplies for Daash terrorist, stressing that the alliance coordinates with the Peshmerga forces and Sunni to restore the city.

Magherk said at a hearing of the Foreign Affairs Committee of US House of Representatives on Daash threats and pursued / Baghdadi News /, that “the coalition will work this year to accelerate the strikes against the organization to achieve further progress.”

“The coalition will focus its operations on the restoration of the Iraqi city of Mosul,” adding that “the process will be difficult and represents a major challenge, especially since nearly one million people living in it.”

The US official stressed that “coalition forces conducting consultations to coordinate with the Peshmerga forces and other Sunni forces in order to prepare well for the attack on Daash in Mosul, in the context of the liberalization process already initiated by the coalition, as he put it.”

He pointed out that “the battle to liberate Mosul began to cut off communications and supplies for Daash and the bombing of the organization weapons and training storage centers” .anthy 21 / t

Directed Prime Minister Haider al-Abadi, on Wednesday, to Italy and Germany on an official visit to discuss the support of the seven industrialized nations of Iraq, will take part in al-Abadi in the Munich Security Conference.

Ebadi said the Office in a statement received (range Press) copy of it, “the Prime Minister Haider al-Abadi left Baghdad on an official visit to Italy and Germany, where he will meet officials of the two countries to discuss and develop economic and security cooperation and to meet the need of the Iraqi forces, weapons and military equipment, training and relationships.”

The statement added that “al-Abadi will take part in the Munich Security Conference, which will be attended by representatives of various countries around the world to discuss ways of cooperation and coordination to enhance security and counter-terrorism, which poses a threat to the whole world.” 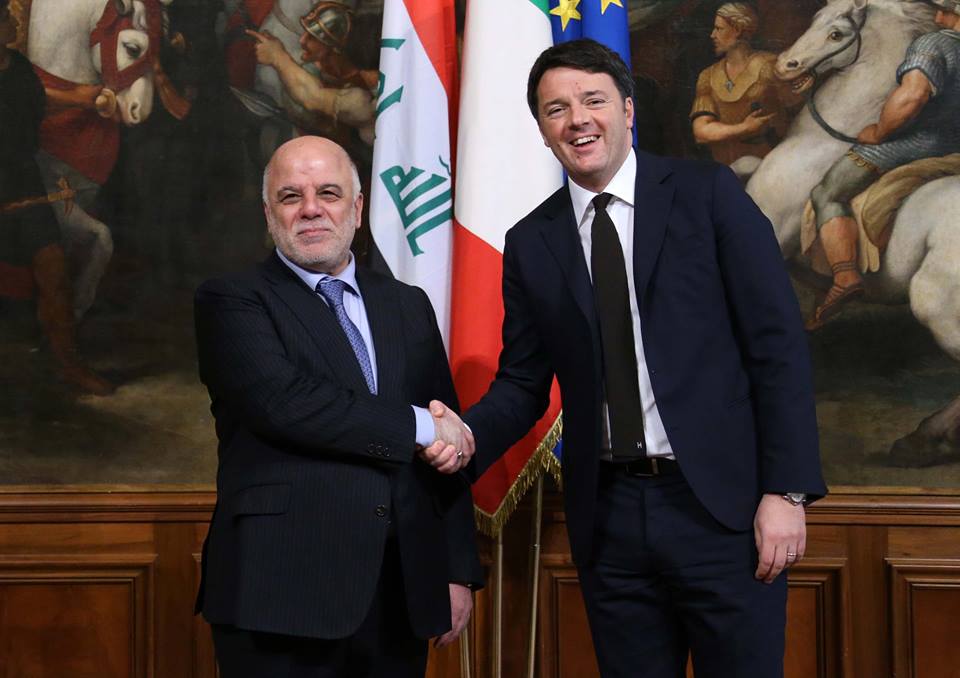 Privileged to testify before @HouseForeign on evolving threat of #ISIL and our global campaign strategy. Watch here: http://www.c-span.org/video/?404388-1/hearing-evolving-threat-isis …

The Abadi arrived this morning to the Italian capital, Rome, and then went to Almanaa.anthy

Twilight News / governor of Dhi Qar Yahia Nasseri said on Wednesday an agreement with the British side to form a joint committee for economic, trade and investment cooperation and increase the number of excavation work at archaeological sites missions in the province, while the British side pledged to work to increase the number of British companies operating in the province in coordination with local government.

He said the Nazarene during a joint news conference with British Ambassador Frank Baker in the Office of the province in the presence of First Deputy Governor Adel Aldechala that “the administration of the province agreed with the British side to form a joint committee to develop economic and trade relations and follow-up work of excavation missions and stimulate UK companies to work in the investment sectors and implementation government projects. ”

He expressed the governor of Dhi Qar hope that contribute to the Committee’s work Ptedeid relations between the two sides and the development work to benefit from the experiences of British and abilities in all fields.
He stressed the Nazarene keen conservative administration on the entry of British companies and increase the number of excavation missions to work in the province.
On his part, the British Ambassador Frank Baker said. ” We had a useful discussion of the development of relations between the British embassy and the local government in Dhi Qar and we have agreed to establish a joint committee to deepen relations between the two sides. ” He is pointing out that the formation of the committee aims to develop trade, economic, investment and capacity development of relations.

He noted that trade and investment body in the British Embassy will work to increase the number of British companies operating in the province in coordination with the local government in Dhi Qar.

Baker said, “We look forward to the development of relations between the largest in the United Kingdom and the province of Dhi Qar, through the work of the Joint Commission.” Stressing the continuing British side support for exploration in Dhi Qar province, where British mission excavation works in Tel Khyber (40 km west of Nasiriyah.)
The British Ambassador Frank Baker had visited the province of Dhi Qar on Wednesday afternoon at the head of a delegation from the British Embassy and discussed with the local government in Dhi Qar number of economic, commercial, political and security issues.

Shafaq News / The president of the Government of Kurdistan and the Kurdistan Democratic Party vice chairman Naچervan Barzani, on Wednesday, that the province has not seen any financial crisis, such as those taking place today since the nineties of the last century, adding that the prospects are bright and the region will be able to pass this crisis, too.

He spoke Barzani in the meeting at length the current situation in the region and the effects of the financial crisis on the situation in the region in general and especially the living conditions for employees and citizens in the region, highlighting the reasons that led to this crisis, since cutting the provincial budget since 2014 to impose “Daash” war on the region and the resort about 1.8 million displaced people and refugees to the province and the reason for the latest and the most influential is the drop of oil in the global markets that caused the problems and crises of the region is not alone, but for all countries in the economies that depend on oil.

Barzani expressed his appreciation and appreciation to the staff and the steadfastness of the people of Kurdistan in front of this difficult situation, touching, especially the role of party cadres and members of his bloc in parliament and influence to maintain security and to clarify the risks of these crises to citizens to pass while the crisis.

He spoke Barzani about the importance of the continuation of relations between Erbil and Baghdad, explaining that if the two sides can not agree on a number of points, but it would be better for the present and the future of Kurdistan that province relations with Baghdad continue, stressing that Iraq’s political dimensions, economic, commercial and social Kurdistan Region that the region

He leaves the head of the Kurdistan region, Massoud Barzani, the capital, Erbil, to participate in the Munich Security Conference, which will start on Thursday in Germany.

It will focus the discussions which will be attended by representatives of various countries around the world in addition to the presence of Iraqi Prime Minister Haider al-Abadi, the support of the seven industrialized nations for Iraq to develop its economy and to benefit from their expertise in all fields, as well as ways of cooperation and coordination to enhance security and counter-terrorism, which poses a threat to the whole world.