The interactive workshop facilitated extensive discussions and included practical exercises. In a final wrap-up session, participants were given the opportunity to identify potential areas for future METAC technical assistance support.

Officials from national statistical offices who are involved in the compilation of price statistics in the Middle East and North Africa (MENA) region attended the workshop. In total, 24 participants from eight countries attended. The countries represented included: Afghanistan, Egypt, Iraq, Jordan, Lebanon, Pakistan, Sudan, and West Bank and Gaza.

The government of Prime Minister Haider al-Abadi backtracked on the decision to withdraw all the laws that the previous government had sent to the House of Representatives after the agreement with the legislative authority to determine the laws to be modified to comply with government reforms.

Legal Committee revealed 15 send a draft law to the government out of the 200 parliamentary committees legislation is working to complete the approval stages.

The Commission talks about understanding and rapprochement between the government and the parliament to prevent the obstruction of the legislative role, by providing the government for its observations on the relevant financial obligations laws.

The Cabinet decided, early last September, the withdrawal of laws submitted projects to the House of Representatives by the previous government for re-review and formulation. “

Says MP Salim Shawki, a member of the Legal Committee (range), “The federal government has asked in previous periods of the Presidency of the Council of Representatives provided with all the existing laws have felt then that this request can not deal with him because it would lead to empty the parliament of laws.”

Shawki pointed out that “the House of Representatives set up a committee designated turn the existing laws with the legislative branch, which is a conventions and treaties and laws involving financial coca is classified as controversial.”

Added Bloc MP for the citizen “These parliamentary committee agreed with the Council of Ministers to determine the law to be amended or revised by the government, as well as the inability to send all the existing laws in the parliament to the government.”

He said a member of the legal committee to “The committee also agreed to write the laws, which include the financial implications are not in line with Abadi reforms, and passed to the government.” He noted that “Parliament will commence in the next phase of several important laws to back the reform of the judicial process as an amendment to the judicial prosecution and supervision of the judicial system and the Supreme Judicial Council and the Federal Court Act.”

An estimated MP Salim Chawki existing laws in the legislature included 200 law. Indicating that the number of laws that have dragged the government “does not exceed 15 legally,” refused to disclose details.

But another member of the legal committee says that “the government has withdrawn 54 law of the House of Representatives,” pointing to “the existence of opinion in the legislature calling for the continuation of this legislation drawn laws.”

MP says Amin Bakr, a member of the legal committee, said that “there are bills reached the stages of the vote and therefore the House of Representatives considers it necessary to complete and the government to give advice and show the note about any law, rather than return to it again.”

Confirms Bakr, told the (range), “the existence of understanding and rapprochement between the legislative and executive branches on the last send its observations on any law to take it before the Parliamentary Standing Committees.” And it considers that this understanding granting the parliament the green light to continue enactment of these laws.

The legal adviser to the president of the House of Representatives, he emphasizes that “the laws that the government has demanded drag, during the past months, are still found at the Parliament did not send to the Council of Ministers.”

He says adviser morning Karbouli, told the (range), “The House of Representatives in the past that this legislation existing laws to include at its committees and continues to hold its meetings in order to pass these laws.”

Karbouli He pointed out that “the government it wants to pull through these laws, in which the financial bush, adjusted in line with the repercussions of the economic crisis experienced by Iraq.” Revealing “the parliament to send a commission to the Council of Ministers to determine the laws to be amended, but the government did not specify these laws.”

It is expected the parliamentary adviser that “the government backtracked on its earlier decision to withdraw the laws of the House of Representatives to make some amendments and additions to it.”

[Baghdad-where]
search Oil Minister Adel Abdul-Mahdi on Monday in his office at the ministry with the Secretary General’s Special UN envoy in Iraq, Jan Kubiš political and economic situation in Iraq and the world.
According to a ministry statement said the two sides stressed “the need for peace and international security and the fight against terrorism,” .anthy
http://www.alliraqnews.com/modules/news/article.php?storyid=29645

{Baghdad} Euphrates News President Fuad Masum, arrived in Baghdad on Saturday evening, coming from the city of Sulaymaniyah.
According to a presidential statement, the agency {Euphrates News} received a copy of it on the “infallible returned to Baghdad after attending a government delegation, such as the Prime Minister Haider al-Abadi included Abdel-Halim al-Zuhairi and on the Keywords, in the House of personal consolation national and social Sheikh Cengi Talabani brother of former President Jalal Talabani, which was held in the district of Koysanjaq of the city of Arbil. ”
he said he was” in the House of condolence was received infallible and his sons and those with the deceased and the delegation, which expressed deep sorrow in this patient painful and feet and the delegation accompanying condolences to them, calling Bari Almighty to grant the late mercy wide and inspires his family and loved ones patience and fortitude and protect them from all harm, “.anthy
http://alforatnews.com/modules/news/article.php?storyid=108243 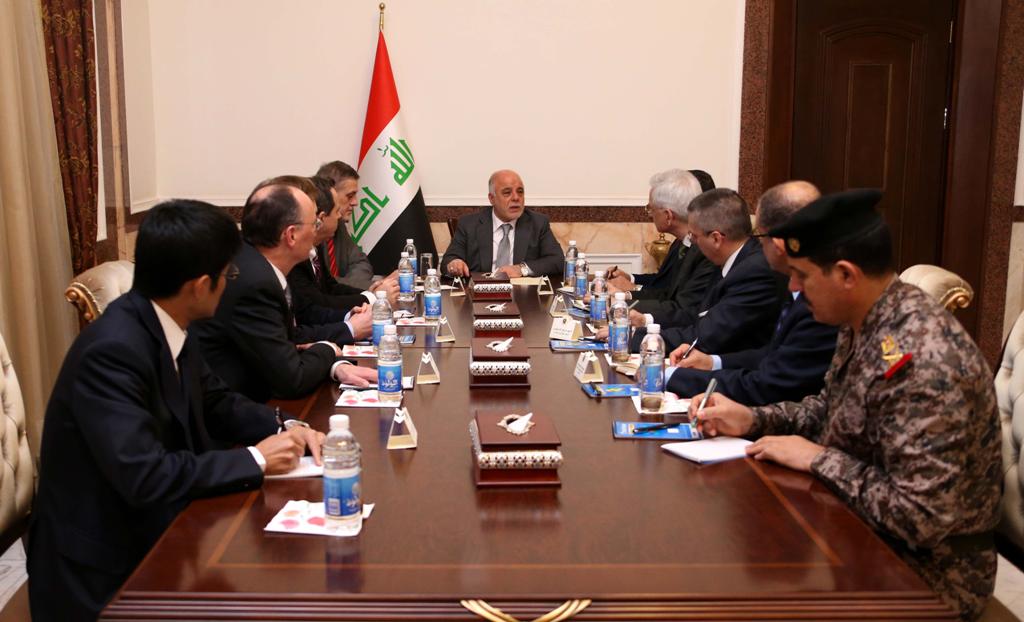 The ambassadors expressed their countries full support for Iraq in the financial crisis as a result of the collapse in oil prices and to find ways and alternatives and solutions to overcome them and to provide resilience for the Iraqi economy.

They also renewed their support for Iraq in its war against terrorism and expressed their congratulations on the victories achieved against the terrorist gangs.

They also voiced their backing for the reforms carried out by the Prime Minister Dr. Haider Al-Abadi and support for them through the provision of expertise to Iraq and training of Iraqi cadres.

Dr. Al-Abadi said that as Iraq is going through these challenges and difficult circumstances there is an opportunity to restructure the Iraqi economy to make it more efficient through the increasing its sources of revenue, and that we started the basic requirements for reform in order to build a state of institutions not just the goal of overcoming the crisis but to build a sound and healthy economy for the Iraqi state to move forward with.

A senior US official said on Monday that the organization of the Islamic state was forced to cut the salaries of its fighters as much as half because of the significant impact of air strikes by US-led funds derived from oil sales organization.

He said Daniel Glaser, Treasury’s assistant secretary for terrorist financing The air strikes have weakened the ability of the organization to the oil extraction, refining and transportation of controlled areas in Iraq and Syria.

He said at a conference in London, “When we look at the difficulties that they know they face with respect to transport and extraction I think it’s fair to say that he can no longer make money as was the case before.

“Islamic state reduced the salaries of its fighters in tenderness by up to 50 percent.”

He said the strikes also targeted sites stash the cash resulting in “virtually to the burning of millions of dollars.”

He announced the organization of the Islamic State Islamic caliphate state unilaterally in areas controlled by Syria and Iraq.

Glazer said the United States estimates that the organization was earning about $ 500 million a year from oil as well as hundreds of millions of additional taxes and extortion along with hundreds of millions seized by banks when they dominated the cities and towns in Iraq.

But he said the air strikes began to make a big impact.

This is supported by the Iraqi government’s decision to stop paying salaries to state employees in the territory controlled by the organization as this is equivalent to about two billion dollars annually.

He said the organization still has a lot of money, but cutting the income flows will limit his efforts.

Iraqi military officials confirmed that the Iraqi army has deployed thousands of troops in northern Iraq drunken base in preparation for operations to regain control of Mosul Daash of terrorist gangs.

And moving the US Digital Journal site in the news translation agency / information / for Brigadier General in the Iraqi army on condition of anonymity as saying that “military units of the Iraqi army had begun to reach a drunken base to start launching initial military operations around Mosul.”

He added that “there are three brigades at present there hopefully that’s up to 4,500 troops,” adding that “the forces of the band 15 and band 16 will participate in the restoration of Mosul operations.”

He continued that “the first goal is to cut off supplies completely Daash between Mosul and areas of the south, including the area of ​​Hawija in Kirkuk, Baiji and near areas in Salahuddin province.”Finished / z 25