Baghdad «Quds Al-Arabi»: met with President of the Kurdistan Nechirvan Barzani Regional Government, on Sunday, the President of the Iraqi government, Haider al-Abadi, to discuss the stalled between the capital and the region’s oil agreement, and other issues including coordination in the face of the organization «Islamic state» and treatment of displaced people crisis to the region.
News reported that the talks between the two parties will take part in the American side through Washington’s ambassador in Baghdad Stuart Jones, so as to overcome the outstanding differences between the parties and to ensure the implementation of the undertakings.

Iran said on Sunday that nine more banks are set to be re-connected to SWIFT international banking system.

Valiollah Seif, the governor of the Central Bank of Iran (CBI), has been quoted by the media as saying that the banks will be re-connected to SWIFT in the early hours of Monday.

He said the banks are Bank Melli Iran, Tejarat Bank, Bank Mellat, Bank of Industry and Mine, Post Bank of Iran, Bank Sepah, Export Development Bank, Refah Kargaran Bank and the CBI, itself.

Seif added that the mechanism for the Iranian banks to open letters of credit (L/C) is already working. He said the mechanism started to work immediately after the sanctions on Iran were lifted in mid-January.

The L/Cs, he said, were opened in the banks of the Persian Gulf countries and were delivered at European banks the next day.

Iran saw the draconian sanctions that had been imposed against it for several years lifted on 16 January.

A central theme of the sanctions was putting restrictions on Iran’s banking transactions with the international financial institutions through various mechanisms including closing SWIFT services to the country.

SWIFT is used by nearly every bank around the world to send payment messages that lead to the transfer of money across international borders. It provides a wide range of service including transmitting letters of credit, payments and securities transactions among 9,700 banks in 209 countries.

However, it became off limits to Iranian banks in 2012 after the implementation of the US-led sanctions against the country. Accordingly, around 30 Iranian banks were blocked from using SWIFT services, literally cutting off Iran from the global banking system.

Political sources revealed the arrival of US Secretary of State adviser on Iraq and Syria Brett what Cgork to the Iraqi capital Baghdad.

The sources said that what Cgork will discuss with representatives of the delegation of the Kurdistan Regional Government and the Federal Government in Iraq, ways to counter organizing Daash by the Iraqi army and the Peshmerga forces as well as an end to all outstanding issues between Baghdad and Erbil and resolve the crisis between the two sides smooth ways away from escalation and intransigence.

MP Falah Hassan al-Khazali, called on Wednesday, 01/28/2016 central government to reconsider its customs tariff law and apply it fairly.  MP Khazali during a meeting held at his office in Basra province with a number with academics and economists supporting the local consumer and the product and the introduction of additional revenue. The MP al-Khazali, the importance of supporting this law Pmaakhaddm interest of the country economically in the light of the difficult conditions experienced by the country, referring to the need to apply the vocabulary in the provinces of Basra and Sulaymaniyah and put full of checkpoints in accordance with the resolution adopted by the Council of Basra province to implement it in all official and unofficial outlets in Kurdistan .
http://parliament.iq/details.aspx?id=58502&AlwType=Pre

2,000 runners took part in Baghdad Marathon, the first of it’s kind in #Iraq 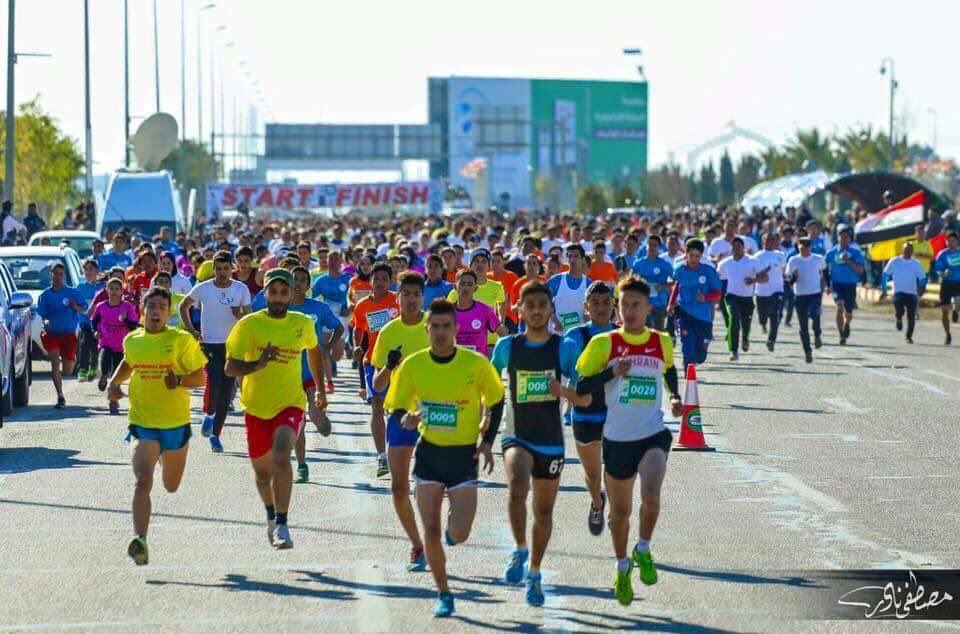 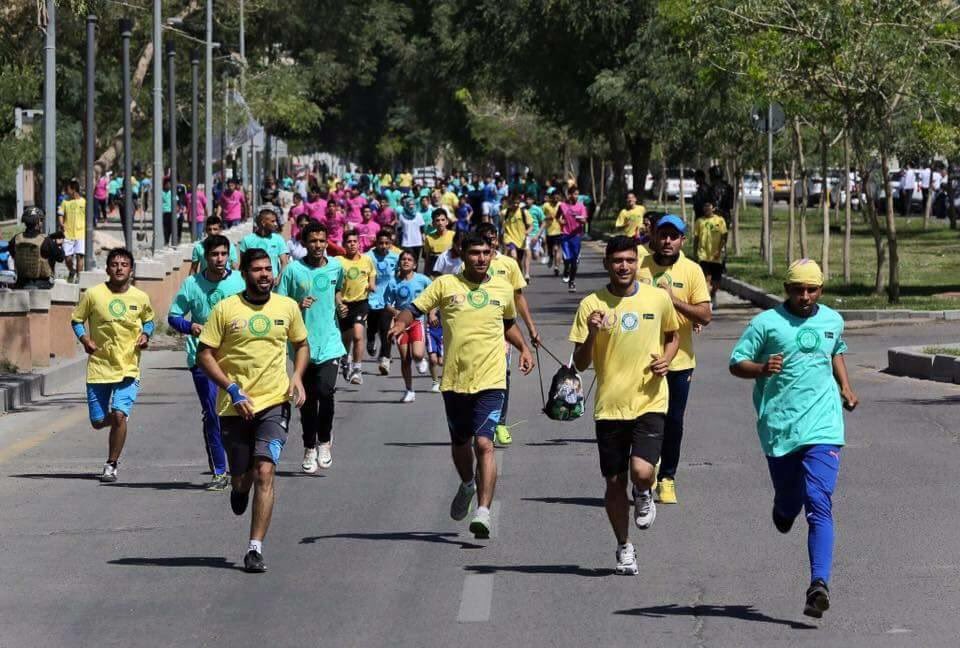 BAGHDAD / obelisk confirmed the Cabinet, on Sunday, securing 2016 salaries by 100%.

The prime minister said in a statement that ‘State officials and the salaries of retirees and beneficiaries of social welfare has been secured for 2016 by 100%.’

He warned the Council of Ministers, citizens ‘hear what I have described false rumors that are trying to undermine security and stability in the country through to play the economy and the erosion of oil prices’.

The prime minister noted in a statement to ‘the existence of very few cuts considered in Alraotb’, noting that ‘salaries is a red line that can not be compromised. “

On the security front, the Information Office of the Prime Minister Haider al-Abadi, announced Sunday that al-Abadi chaired a meeting of the Commission on reinforcing the presence of the ministers of defense and interior Khaled Mohammed al-Obeidi Ghabban, to discuss the arming and equipping the Iraqi armed forces in its war against al Daash.

Ebadi said in a statement that the Office ‘Prime Minister today presided over a meeting of the Commission on reinforcing the presence of the defense and interior ministers’.

The statement added that ‘During the meeting, they discussed arming and equipping the armed forces requirements in its war against the terrorist gangs and follow the directions and recommendations made at previous meetings’, pointing out that it ‘has been taking a series of decisions in this regard’.

Prime Minister Dr. Haider Abadi receives US President Mr. Brett Mkourk envoy and his accompanying delegation. During the meeting, they discussed bilateral relations between the two countries and the war on terror Daash and victories achieved on the enemy, arming and training Iraqi forces gangs.

{Baghdad: Euphrates News} Search Transport Minister Baqir al-Zubaidi with Falcon Air Line Co. Aickensa American mechanism of security cooperation and service in airports and airplanes.
A statement of the Information Office of the Minister of Transport agency {Euphrates News} received a copy of it today, that “Transport Minister Baqir al-Zubaidi met in his office in Baghdad on Sunday, a delegation of American specialist in the field of air transport and tourism services, headed by Michael Diababeru Falcon Air Line Aickensa company.”
He added that he “During the meeting, they discussed joint cooperation between the Iraqi Ministry of Transport represented the authority of the Civil Aviation and Iraqi Airways and US company after the company offered its services in the field of airport security, aircraft and provide ground services for aircraft as well as maintenance, fuel and meals for travelers.”
said Zubaidi, during the meeting, “passion to increase cooperation between the two sides, especially in the transport sector, “adding that he” supports any cooperation contributes to ascend the Iraqi Airways is one of the best use of technology used by international airlines hand, and the training of engineering and technical personnel and Iraqi pilots in addition to the mutual benefit between airlines and Falcon exchange Air Line America in the field of promoting tourism and trips to work for business within the United States.
“The face of al-Zubaidi, director general of Iraqi Airways and the Civil Aviation Authority for a joint meeting with the American company to find a mechanism for joint cooperation between them and the study open a direct air route to America and view the topic to the attention of the Board Aladarh.anthy
http://alforatnews.com/modules/news/article.php?storyid=107517

Twilight News / confirmed envoy of US President Brett Mkourk during a meeting with Prime Minister Haider al-Abadi Sunday his country’s support for Iraq in its war against terrorism.

An Iraqi government statement said al-Abadi “received in his office on Sunday envoy of US President Brett Mkourk and his accompanying delegation.”

The statement added that “During the meeting, they discussed bilateral relations between the two countries and the war on terror and Daash victories achieved on the enemy, arming and training Iraqi forces gangs.”

Mkourk stressed his country’s support for Iraq in its war against terrorism and the challenges faced by the various sectors and Iraq’s sovereignty and territorial integrity.