{INTERNATIONAL: Euphrates News} launched Wednesday the work of the Davos Economic Forum in Switzerland amid tight security measures.
And discusses the Forum threatened global growth geopolitical situation which is characterized by attacks almost daily and the crisis of immigrants.

Participants in Davos more than 2,500 of the most important decision-makers in the world’s heads of state and government as well as ministers and owners of companies and artists.

And directed the Prime Minister Haider al-Abadi on Wednesday to the city of Davos Swiss to participate in the Economic Forum Alaalmi.anthy

– The balance of news
The State of law coalition member disclosed under the National Alliance Ibtisam Al-hilali, Tuesday, about having weights to postpone the Parliament session to be convened on Saturday instead of Thursday for busy House of Islamic parliaments Conference.

She is a member of State of law coalition under the National Alliance, that “If the meeting is adjourned to Saturday, the agenda of the first meeting will remain the same.”

This “felt House member from DG, National Alliance, the Islamic parliaments Conference held in Baghdad would reflect well on the security situation in Iraq, indicating that the Conference will exchange experiences and information between parliaments.”

Twilight News / Ministry of Finance was held in coordination with the Committee on Economic Affairs, an expanded meeting on the evening of January 2015 20 examined the financial situation in Iraq.

The Finance Ministry said in a statement that the meeting was held “under the chairmanship of Finance Minister Hoshyar Zebari, and the presence of oil ministers, Planning and Agriculture and the Governor of the Central Bank and a number of members of the Committee in addition to a number of financial, economic and academic experts to discuss the financial situation in Iraq, and ways to address the economic and financial crisis through the implementation of urgent action conducive to maximizing the resources of the state to overcome the financial crisis of the 2016 budget. ”

The statement that he “has formulate specific ideas carried out within the economic comprehensive framework for dealing with the immediate actions executable quickly as well as the formulation of economic and financial policies in the short and medium term, lead to the diversification of resources and reduce in the end dependence on oil as a key resource for the Iraqi economy, with an emphasis on the importance of harmony actions with existing mechanisms between Iraq and the IMF cooperation. ”

The parliamentary finance committee, revealed Wednesday that the federal budget for the current year deficit of $ 74 billion of the $ 94 billion is the budget, stressing that the budget has not been published in the Official Gazette until now.

He said committee member Abdul Qader Mohammed told / information /, “The current year budget in 2016 is still just words on paper did not apply its provisions yet,” noting that “the draft budget did not now be published in the official newspaper the facts.”

“The budget deficit of $ 74 billion of the $ 94 billion is in the general federal country’s budget,” stressing that “it is supposed to government and related parties should make more effort and seriousness to resolve the outstanding and recurrent cases per year when initiating the preparation of the budget.”

He pointed out that Mohammed “a surging budget deficit leads to the need to emphasize the proper planning of the budget and in the early adoption of adequate transparency in their resources and all aspects of exchange and direct resources in order to achieve a real balanced and sustainable development.”

It is noteworthy that Iraq is witnessing a severe financial crisis after the fall in oil prices significantly large deficit in the balance of the year 2016, all this with the high costs of the war on terror for the Liberation of Albulad.

Held substantive bilateral with FM Lavrov in #Zurich before traveling to #Davos to see PM Abadi & other leaders. 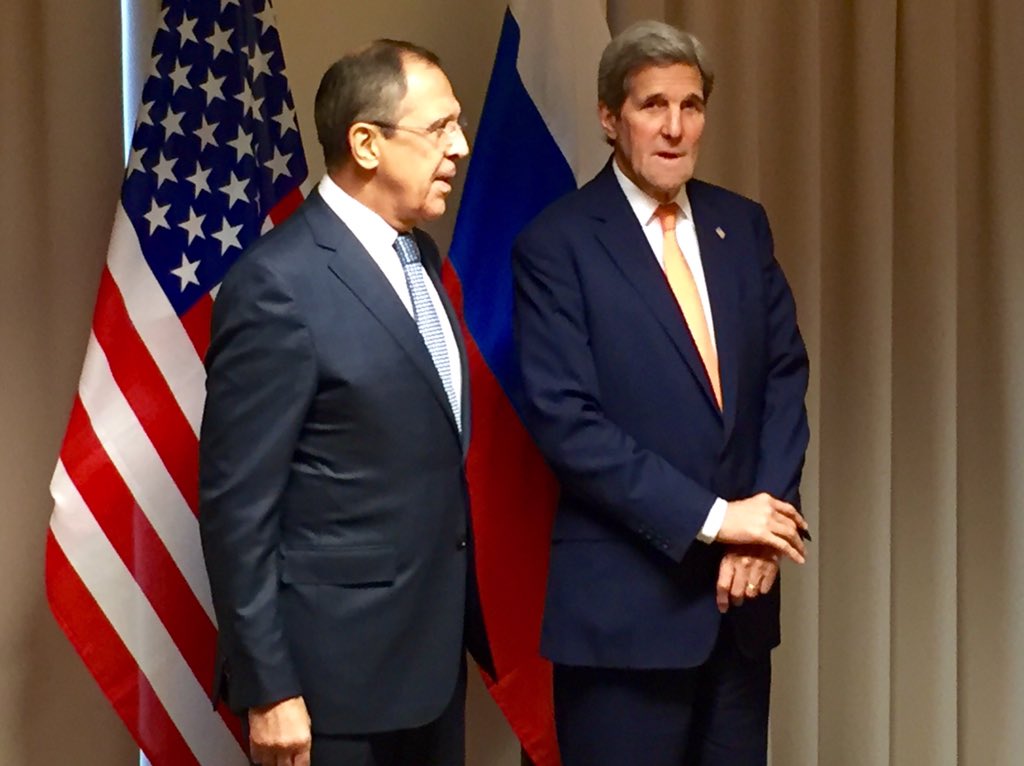 [Baghdad-where]
the Prime Minister Haider al-Abadi went on Wednesday to the Swiss city of Davos for the World Economic Forum, which kicks off tomorrow Alkhamis..itba
http://www.alliraqnews.com/modules/news/article.php?storyid=27766

[Baghdad-where]
the government announced a comprehensive economic framework for the diversification of financial resources quickly because of the continuing decline in oil prices and its impact on the state’s resources.
A statement by the Ministry of Finance Agency has received all of Iraq [where] a copy of it, s Ministry of Finance was held in coordination with the Committee on Economic Affairs, an expanded meeting on Wednesday evening, chaired by Finance Minister Hoshyar Zebari, and the presence of oil ministers, Planning and Agriculture and the Governor of the Central Bank and a number of members of the committee in addition to a number of financial experts, economists and academics to discuss the financial situation in Iraq.
“The Search assembled according to the statement” ways to address the economic and financial crisis through the implementation of urgent measures conducive to maximizing the resources of the state to overcome the financial crisis of the 2016 budget.
“The statement pointed to” develop specific ideas implemented within a comprehensive framework of economic deals with procedures Wares executable quickly as well as the formulation of economic and financial policies in the short and medium term, lead to the diversification of resources and reduce in the end dependence on oil as a key resource for the Iraqi economy, with an emphasis on the importance of harmonization of procedures with the existing mechanisms between Iraq’s cooperation and the International Monetary Fund. ” .
It is noteworthy that, oil prices are these days, a collapse remarkable which recorded the lowest level over the past 13 years since I arrived last Friday to $ 25 a barrel for a basket of crudes OPEC and less than $ 30 for Brent.
The Office of the Prime Minister Haider al-Abadi, confirmed Friday the past, the government continues to search for sources of funding out of the economic crisis, including internal and external borrowing and taxation and activating the customs tariff and selling bonds, international and internal subscription and implementation of projects on credit.
A spokesman for the Office Saad al-Hadithi’s [where], “The government has drawn up plans in budget 2016 passed by the Parliament is to search for sources of financing be helping and assisting the oil sources, “noting that” the adoption of the budget on oil sources this stage is no longer feasible.
“He said Sabri that” there are other options carried out by the Iraqi government by offering bonds or internal IPO or even the sale of international bonds and the implementation of some projects on credit payment system according to the specific percentages do not conflict with Iraq’s economic future, “.anthy
http://www.alliraqnews.com/modules/news/article.php?storyid=27768

[Baghdad – where]
directed Prime Minister Haider al-Abadi, this evening, to the Swiss city of Davos for the World Economic Forum.
And his office said in a statement received by all of Iraq [where] a copy of it, that “the meetings Abadi Hawwarth in the Forum will focus on the challenges that Iraq is going through and of the economic and financial challenge as a result of the collapse of oil prices with the fight Iraq a fierce war against terrorist organizations and achieve big wins represented editing spaces and a wide range of Iraqi territory.
and participate in the activities of the World Economic Forum in Sharm [Davos in Switzerland for at least 2,000 of the top makers of political and economic decision in the world to study common challenges and how to deal Maha.anthy
http://www.alliraqnews.com/modules/news/article.php?storyid=27767

She said in committee the economy in the Iraqi parliament member, said that Baghdad will not face a problem this year, in the provision of employees ‘salaries, because there are other sources apart from the oil revenues, can be built upon to provide the employees’ salaries.

The estimated general budget for Iraq, which was approved in Parliament before the beginning of this year, B105 trillion and 895 million dinars, and the share of the Kurds in which 13 trillion and 76 billion dinars, on the condition that is committed to the Kurdistan region to export 550 000 barrels of oil per day by SOMO.

She explained member Najiba Najib Committee, the network Roudao media that “Iraq depends on oil to provide more than 90% of the budget, based on the sale of oil, $ to 45, and estimate revenue to 83 trillion dinars, and customs revenues by 3 to 5 trillion dinars per month, but a barrel of oil sold for far less than $ 30, and this will make a big difference in revenue, but according to our analysis, the Iraqi government can provide in 2016 the salaries of staff without a problem. “

Najib says “in this year allocated 39 Trliuna and 146 billion dinars, and because of the continuing chill between Arbil and Baghdad do not expect to hand over Baghdad province of Kurdistan staff salaries, so you may need, such as last year to nearly 32 Trliuna and 500 billion dinars.”

Now, Iraq’s oil exports rose to 3.2 million barrels per day, says Najib, “If we assume that the price of oil became $ 25, Van Iraq a month will get two billion and 400 million dollars in revenues of oil, and that the total annual revenue of up to 28 billion and 800 million Dۆlar, and the remaining part of this, Iraq can through the sale of bank bonds, bridging the deficit employees’ salaries. “

She added, “Iraq I have other sources to secure the employees’ salaries, and can through the $ 59 billion reserve and 90 tonnes of gold in the central bank, and by borrowing from the International Monetary Fund and the World Bank and the policy display the dollar against the Iraqi dinar in the Central Bank, addressing the financial problems easily, So we can say that in 2016 there are no risks to the salaries of the staff of Iraq. “

But Iraqi Finance Minister, Hoshyar Zebari, said earlier in an interview with Roudao network media, said that if oil prices continued to decline in the current format, the distribution of Iraq can only employees’ salaries to the month of April.

Although the survival of the share of the province of Kurdistan in the Iraqi budget law 17% thanks to the efforts of the Kurds of Representatives, but Najib believes that because of the paragraphs of the items contained in the budget bill, it is better for the Kurdistan Region, oil independently sale without reference to Baghdad.