Readout of call earlier today from the Oval Office between @POTUS and #Iraq PM @HaiderAlAbadi.

BAGHDAD / JD / .. parliamentary Finance Committee announced, all prepared a detailed report on the final accounts for 2007 and 2008, the last report, while likely be submitted to the Presidency of the parliament in the coming sessions.
He said the Commission’s decision Haji Ahmed Rashid told / JD /: that the Finance Committee after he was able to complete the draft 2016 budget law and approval by the House of Representatives began discussing a number of important laws and studies pertaining to fiscal and monetary policy of the country.
He added that the Commission has prepared a full report on the final accounts for 2007 and 2008 years for all departments and institutions of the state is in the process finalized and submitted to the presidency of the parliament for the purpose of discussion and voting on it.
The House of Representatives had voted in its meeting held on Wed 16/12/2015 budget next year, in 2016 a total of more than 105 trillion and 890 billion dinars deficit spending accounted for 22.8%.
The total revenue which 81 trillion and 700 billion dinars oil revenues, which accounted for 69 trillion and 773 billion dinars The increase of 85.1% of total revenues. / End / 8 /
http://translate.google.com/translate?hl=en&prev=/search%3Fq%3Dhttp://www.dananernews.com/%26biw%3D1146%26bih%3D537&sl=ar&u=http://www.dananernews.com/&sandbox=0&usg=ALkJrhijzmj8zpdcDSTckAiWuziRGT9yIw

Like Loading...
January 6, 2016
A member of the parliamentary finance committee, Jabbar al-Abadi, the Iraqi government has an obligation to pay employees’ salaries.
Ebadi said that “we can not guess what exists in the state treasury of funds, the government continues to export oil and use oil revenues and other resources to pay the employees’ salaries,” pointing out that “the fluctuation of oil prices may cause a delay in the delivery of salaries and is not interrupted.”
He pointed out that “the budget allowed in internal and external borrowing from banks”.
It is said that, Finance Minister Hoshyar Zebari said in an earlier time of the year 2016 is one of the most difficult years at the suffering of Iraq’s financial crisis, adding that everyone bear the burden of this crisis.
He noted that the government in Iraq working on the rationalization of expenditure and take different financial measures to cover the deficit and tackle the financial crisis in the country.
Zebari said Iraq is suffering from an economic recession due to the financial crisis, pointing out that the budget for the current financial year devoid of appointments in addition to the lifting of government support for the private sector.
Updated on January 06 2016 | Source: Radio Tigris |
https://translate.googleusercontent.com/translate_c?depth=11&hl=en&prev=search&rurl=translate.google.com&sl=ar&u=http://www.faceiraq.com/inews.php%3Fid%3D4493769&usg=ALkJrhhYRuOt-L6sbr1eF9RXP-fv4QmGkQ

Information Office of Ebadi said in a statement, said the US president, Abadi, the Iraqi people, “congratulated the victories achieved by the Iraqi forces on Daash terrorist gangs in the gray areas and the rest.”

Obama reiterated “his country’s support for Iraq in its war against terrorism and to provide all kinds of support they need in the field of air support and arming and training in addition to helping Iraq’s efforts to the challenges arising from the decline in oil prices and the importance of the steadfastness of Iraq against these challenges,” praising “the positions of Iraq balanced and its pivotal role to ease regional tensions and prevent an increase in sectarian polarization in the region, “stressing” parking the United States with the sovereignty and unity of the Iraqi territory. “

For his part, al-Abadi said that “recent victories confirmed the high morale and great capability to our heroine to restore all our lands and the liberation of every inch of the land of Iraq.”

US President Dr. Abadi, the Iraqi people and congratulated the victories achieved by the Iraqi forces on Daash terrorist gangs in Ramadi and rest areas.

#Iraq is celebrating Army Day for its newly trained & confident forces. We will support them in our common fight. 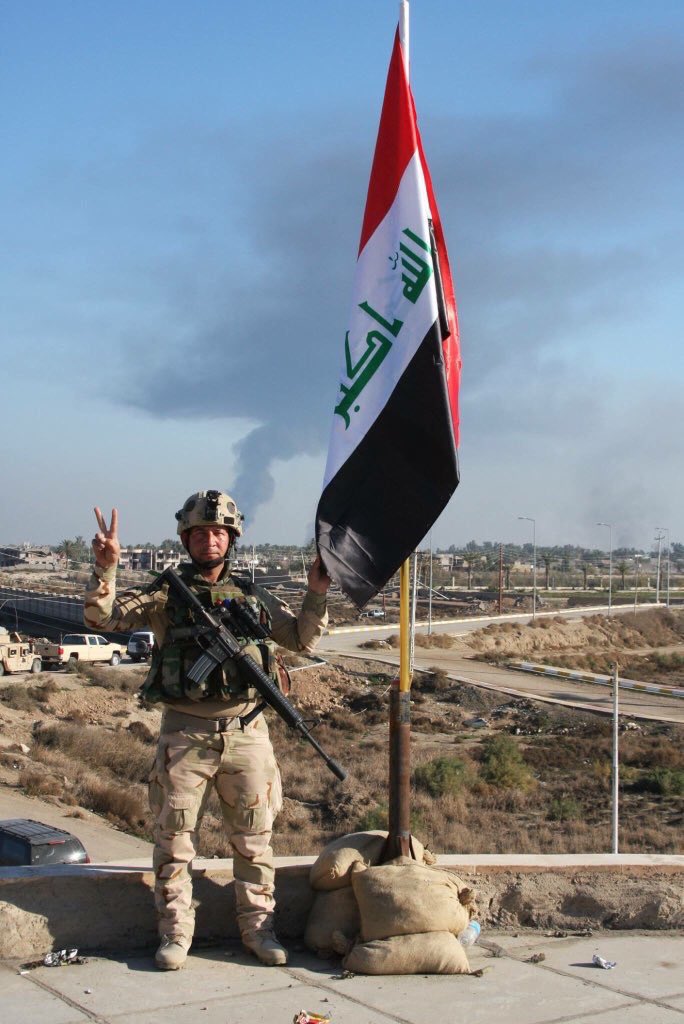 Per @OIRSpox – All #ISIL attacks near #Haditha have been repelled by #Anbar tribes & Iraqi forces w/coalition air support. #ISIS #Daesh

Baghdad / follow-up Baghdadiya News / .. envoy of the international coalition’s President Brett Macgork, for the coalition to get a mandate from the Iraqi government to recruit 10 thousand fighters of the sons of the tribes in Anbar and 24 thousand police assistant in 2016 revealed.

He said Macgork held in Mina in the US State Department conference and I followed / Baghdadi News / that “there is a mandate from the Iraqi government to recruit 10 thousand fighters from tribes in Anbar and 24 thousand police and balancing the 2016 notes recruit 20 thousand in the army.”

He Japinh Macgork stressed that “90% of the residents of Tikrit and returned to the University of Tikrit be reopened and that 16 thousand students are returning to it, and this is not imagine a short while ago in Iraq.” It ended 21 / d

Revealed Imad Youkhana decision of Parliament, on Wednesday, the reason for the extension of his holiday for three days, while stressing that the delay was due to the Platform Parliament who walked in advance initiates its sessions on Tuesday of each week.

Youkhana said in a press statement, that ‘the reason for the extension of the House of Representatives to recess for three days because of the coincidence with the end of the holiday on Saturday’, indicating that the ‘Platform for parliament, which was followed by the advance was initiates its sessions on Tuesday of each week.’

He explained that the decision of the parliament ‘to postpone the hearing for three days will not have a negative impact’ noting that ‘Parliament is always ready to hold emergency meetings if circumstances so require. “

Finance Committee announced in the House of Representatives, on Wednesday, that the ministries will receive their funds immediately after the publication of the general budget in the official Iraqi newspaper facts, pointing out that that of the executive branch functions.

He said committee member Ahmed Sarhan told / information /, “The ministries and state institutions will receive their budget and financial allocations in the general budget for 2016 after publication in the Official Gazette.”

Ahmed said, “The House of Representatives cleared the responsibility of the budget law, and the rest of the proceedings related to the government and the Council of Ministers that they should pursue it.”

The House of Representatives last month approved a general budget for the 2016 law, while the Iraqi government later decided to challenge some of the budget items. Finished / 25