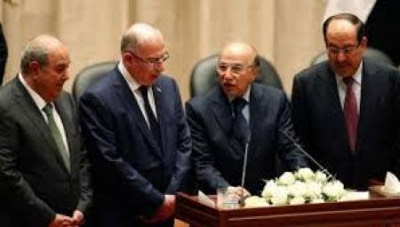 The Federal Supreme Court rejected the appeal submitted by Osama Najafi to cancel the posts of Vice-President of the Republic within the reforms made by the Prime Minister Haider al-Abadi decisions.

He said the legal expert Tareq Harb “The Court rejected the appeal submitted by one of the Vice President of the Republic [covered by the abolition of senior positions],” adding that “this appeal confirms the constitutionality of the decision to cancel these positions.”

The Federal Supreme Court, has been postponed in 17 of this month to consider Mekdmtin Bdaoyen by the president of a coalition united Osama Najafi, to challenge the decision of cancellation of the post of Vice-President of the Republic to 24 of the month [Tuesday] for the purpose of completing legal procedures, and to provide the parties to the lawsuit to Oaiham Reply ” .

The cabinet voted in 11 of last August, agreeing to government reforms, which included the cancellation of a major positions deputies Republic Wazzra.a package