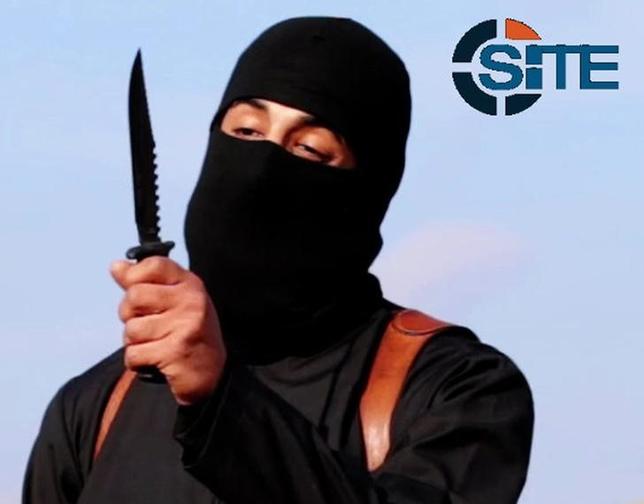 A masked, black-clad militant, who has been identified by the Washington Post newspaper as a Briton named Mohammed Emwazi, brandishes a knife in this still image from a 2014 video obtained from SITE Intel Group February 26, 2015.
REUTERS/SITE INTEL GROUP/HANDOUT VIA REUTERS

The U.S. military has carried out an air strike in Syria targeting Mohammed Emwazi, the Islamic State militant known as “Jihadi John” who participated in gruesome videos showing the killings of Western hostages, a U.S. official said on Thursday.

The United States was still assessing the effectiveness of the strike, which took place around the city of Raqqa, the official said, speaking on condition of anonymity.

The head of the Council of Ministers Haider al-Abadi, said Thursday his intention to press ahead with reform regardless of the difficulties, noting that some of the forces of evil and terrorism hindered the reform, which hit its existence and privileges and corruption that gnaw the body of the Iraqi state.

Ebadi said in a statement to the media his office received / scales News / copy of “The need for reform is not an option and can not win the battle against the state of chaos, corruption and terrorism and the quota system without making fundamental reforms in the state structure.”

He added Abadi he “would push ahead with reform, justice and the restoration of statehood, which Astbaanh the forces of evil and terrorism”, adding that “those forces reluctant obstructed reform tasks being hit very core of its existence and privileges and the system of quotas and corruption which Enkran the body of the state.”

He explained that “reform packages came to address the imbalance in the structure of the state of political, economic, financial, administrative and service aspects,” pointing out that “the reform battle would continue unabated or decline to include the spirit of the state and its institutions, despite the challenges of the economic situation the gorge and the conflict of presence that we wage against terrorism.”

The head of the Council of Ministers, “conviction successfully reform project with the support of the people who expressed their demands civilized peaceful demonstrations, which are bright model on Iraq and the entire region, and to support good reference” .anthy 29/33 h

Promised the United Nations Assistance Mission for Iraq (UNAMI), on Thursday, the prime minister, Haydar al-Abadi, “failed” the implementation of the reforms announced by the result of political differences and polarization progressive forces actors, while demanding the implementation of urgent economic reforms, and the fight against corruption, reform of the public sector and the initiation privatization and encouraging foreign investment to cope with the effects of lower oil prices, the referee called for the restoration of “good governance and the rule of law” in the liberated areas of management (Daash).

He said the Special Representative of the Secretary-General of the United Nations in Iraq, Jan Kubiš, in his latest report on the situation in Iraq, lifting the UN Security Council, and the speech in front of him, on Wednesday, (the 11th of November the current 2015), as I followed the (long-Presse), The “President of the Iraqi government, Haider al-Abadi, who took office last year in 2014, failed to implement the reforms announced by the result of political differences and gradual polarization of political forces.”

He added Kubiš, that “al-Abadi struggling since taking office, to exercise his powers, while opponents become more aggressive, and oscillates popular support him,” noting that although “the hopes on the success of Abadi, the promotion of national reconciliation, and the integration of the Sunni community in the political process, but the There are elements within the Iraqi components are all impede his efforts, as a result of lack of trust and special interests. “

And saw the head of UNAMI, that “the vast majority of Iraqis support the Prime Minister, Haider al-Abadi, as they seek to achieve a better Iraq united and prosperous sectarian and less,” noting that “al-Abadi yet retains a continuous political support from the presence of the religious authority, the Shiite Supreme, Ali al-Sistani.”

Promised Kubiš, that “the Iraqi government and its international partners should carry out economic reforms urgent, and the fight against corruption, reform of the public sector is effective, and to initiate privatization to diversify the Iraqi economy sources and encourage foreign investment and stimulate job growth, to counter the effects of the fall in world oil prices, the financial crisis in the country and the worsening deficit in the budget. “

He said the Special Representative of the Secretary-General of the United Nations in Iraq, “the Iraqi forces and the popular crowd and volunteers of the sons of the tribes, they managed during the past period covered by the report, forcing the organization Daash to retreat, and the restoration of major regions, such as the city of Baiji,” pointing out that ” Daash forces are isolated within the city of Ramadi, as areas around Kirkuk and Sinjar retrieval at the hands of the Peshmerga fighters and volunteers. “

He urged the head of UNAMI, the Iraqi government to “make every effort to ensure the restoration of good governance and the rule of law around urgent in those areas,” stressing that “explained the head of the Iraqi government, and other leaders of the political forces, the need for openness and partnership and conduct extensive consultations in the decision-making process a guarantee to promote the effective management of the country, because the deep political crisis is the last thing Iraq needs at this time. “

The Special Representative of the Secretary-General of the United Nations, that “the mission with the support of the UN Security Council, will continue to work with the Iraqi government and the political forces and civil society to achieve the desired results in all important areas, with the crowd support and cooperation at the regional and international levels.”

The mandate of the mission to provide advice and assistance to the Government and people of Iraq within several areas. This includes the payment of a comprehensive political dialogue and national reconciliation and to assist in the electoral process and in the planning of the national census and to facilitate regional dialogue between Iraq and its neighbors and promote the protection of human rights and judicial and legal reform.

The mandate of the mission is also working with government partners, civil society and for the coordination of humanitarian and development efforts of United Nations agencies, funds and programs under the leadership of the Deputy Special Representative of the Secretary-General for development and humanitarian support, who also works as a Resident and Humanitarian Coordinator in Iraq. 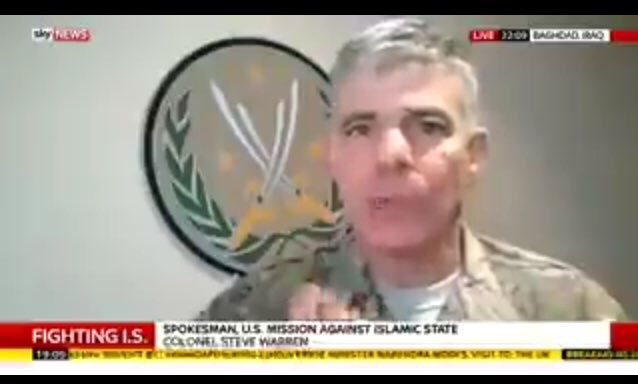 [Baghdad-where]
the leadership of the Peshmerga operations room announced the liberalization of 70% of the district of Sinjar [western Mosul] from Daash terrorist gangs.
It was a major military operation was launched this morning Peshmerga forces led for the Liberation spend Snjar..itba
http://www.alliraqnews.com/modules/news/article.php?storytopic=42&storyid=20942

Peter Cook, spokesman for the US Department of Defense Pentagon Thursday November 12 announced arrived six military aircraft type “F15” to “Angerlk” Turkish base to participate in the war against Daash.

Cook did not confirm the number of aircraft currently on the air base in Turkey.

Organization “Daash” is one of the most serious threats to international peace and security, and managed during the last three years of control over large areas of the territory of Iraq and Syria, and aside from that his supporters is trying to spread the concept of organization in North Africa, particularly Libya.

The United States leads a coalition Ataa draw strikes from the air sites and fighters of the organization “Daash” in Iraq and Syria, while on the ground fighting armies Aovernmaan Iraqi and Syrian organization at home.

The sons of the Iraqi army supported the popular crowd and Iraqi clans, the Russian air force strikes directed to the areas of concentration of the “Islamic State” in Syria.

[Baghdad-where]
Search Prime Minister Haider al-Abadi, in a telephone conversation with the President of Kurdistan, Massoud Barzani victories Peshmerga forces in the liberation of Sinjar district west of Mosul Daash of terrorist gangs, which started this morning process.
And gave Abadi congratulations to Barzani, on the occasion of “achieving victories over Daash in Sinjar, and praised the Peshmerga forces and their bravery in the liberation of Sinjar.”
For his part, the Barzani explained the importance of the victories that day have been achieved on the battlefield, and control of the Peshmerga forces to many areas were under the control of Daash, and the extent Damage amounted to them.
He said Barzani the importance of these victories for completely eliminating this organization in the region.
It was a massive operation was launched this morning from three axes for the Liberation of Sinjar district located on the main highway linking the cities of Mosul and tenderness and are a stronghold Daash terrorist gangs in Iraq and Syria.
Kurdish forces have killed hundreds of terrorists and edit several areas in the town, which was predominantly Yazidi before its occupation of Daash in the summer of 2014.
The aim of the operation as the Kurdistan Security Council says, to “encircle the town and control the supply of Daash lines and create a buffer zone to protect the town from artillery fire.”
The attack, which supports the participation of 20 000 of the Peshmerga air strikes by the international coalition led by the US Altdh.anthy
http://www.alliraqnews.com/modules/news/article.php?storytopic=41&storyid=20938

In the name of God the Merciful, O people Karim .. like you in this historic moments, moments of reform and combatting terrorism and victories achieved by our heroes on the battlefield and to restore the prestige of the state, to assure you: we we started our approach reform of our firm conviction that a comprehensive and radical reform and the national state Base Civil State institutions is the way that leads to stability and development, reconstruction, justice and the restoration of statehood, which Astbaanh the forces of evil, terrorism and corruption, those forces that are reluctant obstructed reform tasks being hit very core of its existence and its privileges, especially the quota system and structure which Enkran body of state corruption system.

I am sure successfully our enterprise reform with the support of the people who expressed their demands demonstrations civilized peaceful is bright model on Iraqna and the entire region, with the support of good reference identified compass and supported and supports our fight reform, and all the political, media and cultural actors that make us tribes have reform front fronts quotas, corruption and terrorism.