Intense day of meetings at #UNGA 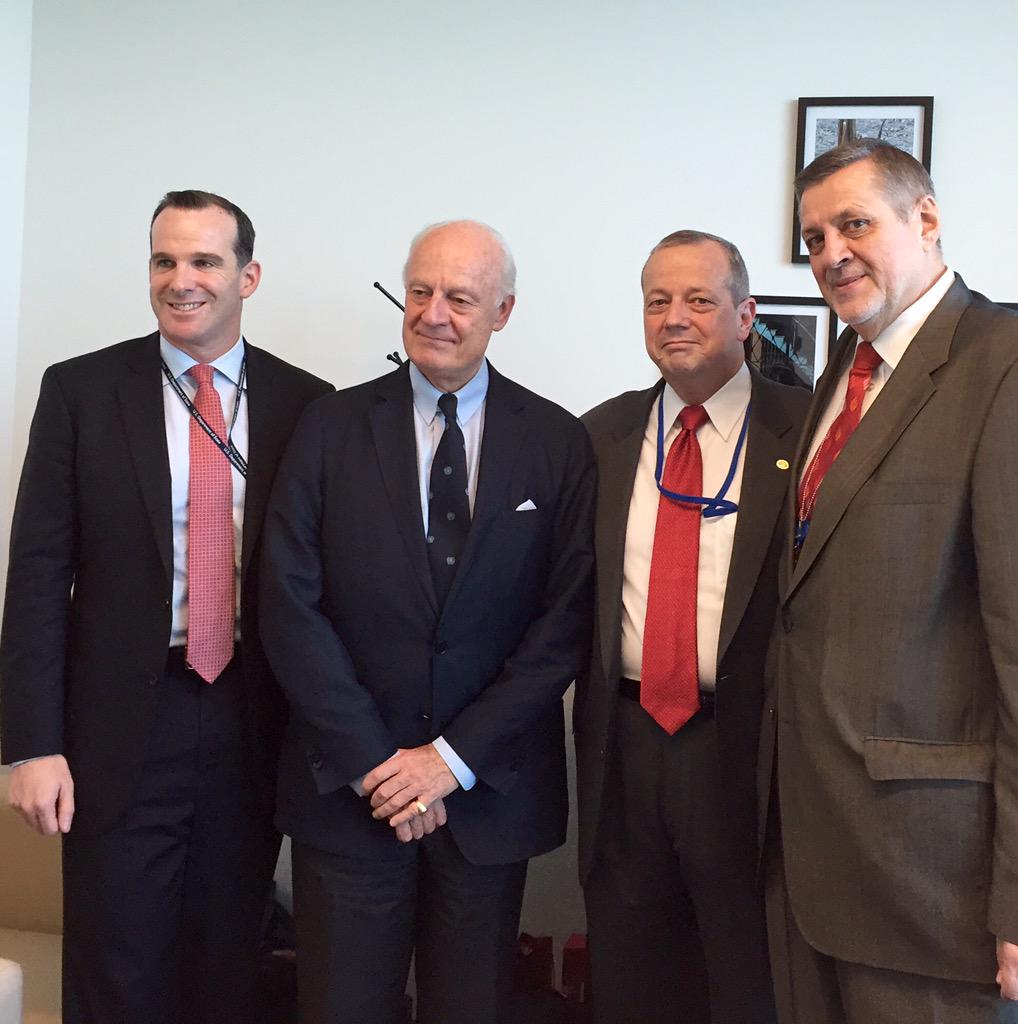 , and strengthening offensive ops against #ISIL. 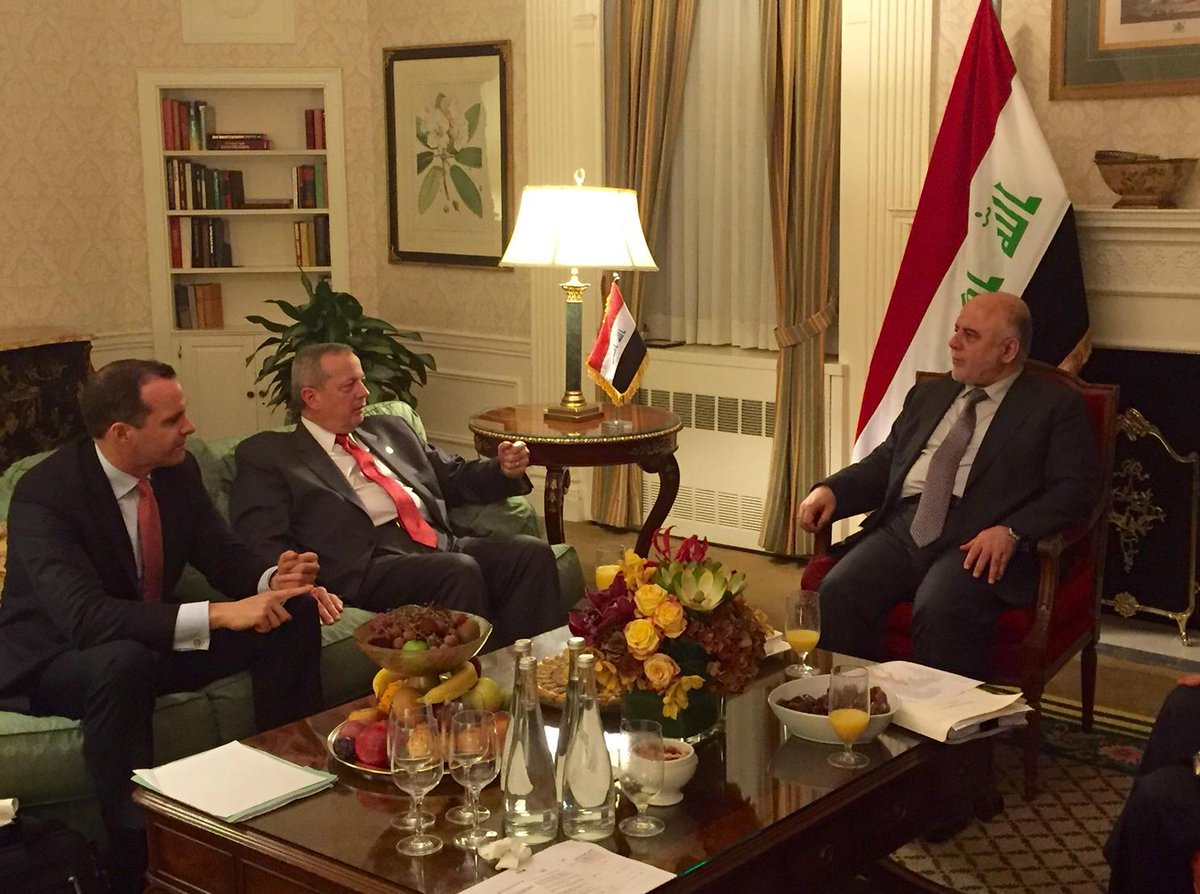 The US embassy in Iraq

A source at the US Embassy in Baghdad, on Monday, announced the appointment of a US military spokesman for military operations against the terrorist organization Daash in Iraq, adding that the speaker will hold its first conference next Thursday.

The source said in a press statement followed tow Radio “The US administration appointed three weeks ago, Colonel Steve Warren military spokesman for America on the ongoing military operations against al-Daash in Iraq,” noting that “Colonel Warren arrived in Baghdad a week ago.”

The source added that “Colonel Warren held his first press next Thursday at the US Embassy in Baghdad headquarters of the conference,” The US embassy has not issued an official statement on the inauguration of Colonel Warren yet.

It is said that the United States is leading an international coalition to fight against the terrorist organization Daash who dominated since June 2014 on Iraqi territory by the security forces to regain the popular crowd and many of those lands.

He stressed economic advisor to Prime Minister Haider al-Abadi, Monday, that the State’s strategic direction towards the private sector, as he pointed to the 2016 budget designed to borrow a little too much debt and filling.

In a related context between Saleh, that “next year’s budget in 2016 is determined to borrow a little bit, and bridging the former too much debt, especially domestic debt.”

The Ministry of Finance announced that, in (15 September 2015) for submission draft 2016 budget law to the cabinet, while confirming the importance of transparency and compliance with legal and constitutional Baltoukitat time in approval, she pointed out that the drafting of the budget was based on the reduction of public expenditure and the fight against waste and waste in state revenues and diversify sources of national income in the country.

Prime Minister Dr. Haider Abadi discuss with Russian President Vladimir Putin, the situation in the region and strengthen the bilateral relations between the two countries in various fields. During the meeting touched on the threat of Chechen fighters with Daash gangs, which represents a common threat to Iraq and Russia. Mr. Putin expressed support Russia full of Iraq in its war against terrorism, in addition to the continued support of Russia to invest in Iraq, especially in the field of energy, pointing out that Russia’s effort in Syria focus on the fight against Daash as they help in arming Iraq to fight these gangs

Alsumaria News / Baghdad
He met with Prime Minister Haider al-Abadi , Monday, Secretary-General of the Arab League Nabil Elaraby and Turkish Prime Minister Ahmed Davutoglu separately, as he emphasized that Iraq seeks to overcome the challenges of the war on the organization of “Daash” and low oil prices and a walk in the country on the right track.

Ebadi said Office in a statement received Alsumaria News copy of it, “the Prime Minister met, today, on the sidelines of his visit to New York to attend the meetings of the General Assembly of the United Nations, Secretary General of the Arab League Nabil al-Arabi and his accompanying delegation,” explaining that “During the meeting, the situation in the region and the importance of concerted efforts to fight Daash gangs and deviant thought and victories achieved by our heroine on the enemy in addition to the political, security and economic challenges and reforms in various sectors. “

The Abadi, according to the statement, that “Iraq faces many challenges, including the war on Daash and lower global oil prices,” stressing “strive to overcome this crisis and move the country on the right track.”

For his part, Arab expressed “the Arab League support for the Government and people of Iraq in the face of terrorism”, stressing that “we seek to provide all that would contribute to the security and stability of Iraq.”

On the other hand, the statement pointed out that “al-Abadi met with Turkish Prime Minister Ahmet Davutoglu and his entourage,” adding that “During the meeting, they discussed bilateral relations and the situation in the region and the war on gangs Daash terrorist addition to the issue of water and a number of topics of mutual interest “.

A source in the Prime Minister’s Office revealed Haider al-Abadi, on Monday, that the latter arrived in New York City at the head of a ministerial delegation to attend the meetings of the General Assembly of the United Nations.

PM Al-Abadi met the Secretary General of the Arab League Mr. Nabil Elaraby and discussed the situation in the region

Deputy for the National Alliance of Prime Minister Haider al-Abadi said on Monday that will demand during the meetings of the General Assembly of the United Nations to support Iraq to counter terrorist gangs Daash. Said Ahmed al-Badri, “The visit of Prime Minister Haider al-Abadi to Neanork so as to inform affiliated to the United Nations on what is happening in Iraq from the security situation to support Iraq’s armament, equipment and training to the security forces to be able to save the country from Daash gangs.” “The drop in oil prices after a major impact on Iraqi economic reality for that to be the prime minister calls for investors to have their investment projects in Iraq to supplement its economy, as well as put forward the issue of the closure of the border with the States because there are some states are supporting gangs Daash terror and all these things will put Abadi internationalism within the session. “ The prime minister Haider al-Abadi and his accompanying delegation arrived this morning to the US New York City to participate in the meetings of the General Assembly of the United Nations. The Abadi had traveled to New York yesterday evening in the two-day visit during which he will deliver the word Iraq in the meetings of the General Assembly of the United Nations. The Prime Minister also held a number of meetings with heads of state address search to strengthen bilateral relations and address the political, security and economic challenges and the war on terror Daash gangs. Abadi also will participate in the international conference to combat terrorism and to support Iraq in the face of terrorism, which will be held in New York in the presence of an international scale.

Prime Minister Dr. Haider Abadi, looking with Danish Prime Minister Lars Loke Rasmussen and his accompanying delegation to strengthen bilateral relations between the two countries and the war against terror Daash gangs. It was in the meeting, the situation in Iraq and the region and the importance of helping the international community for Iraq in its war against terrorism and to activate trade exchange and cooperation agreement discussed in the industry, the economy and other sectors, areas, in addition to the Immigration and Refugee file

Prime Minister Haider al-Abadi said, that the net oil revenues in the draft next year’s budget in 2016, “go 100% to the employees and retirees’ salaries.”

Said Abadi, in his speech before heading to New York at the head of a ministerial delegation to attend the meetings of the General Assembly of the United Nations: “This system a politician who represents the Iraqis and defends them all has to be an example in the question of the distribution of wealth and the issue of justice, “adding that” a lot of privileges has removed and we are still moving in this direction.

“He added,” are continuing to review the salaries of state employees in order to reduce the gap between the top salaries and the world and this is important.

“He continued Abadi” We also seek to interest the private sector and its employees and a draft law on social security, which would provide such a guarantee for all those involved in the Iraqi society and not in the Iraqi state.

“He explained Abadi said,” This guarantee is essential for us, considering that 100% of its net oil imports, according to the 2016 budget does not exceed the 55 trillion dinars go of them up to 40 trillion dinars to salaries and 11 trillion dinars to the retirees and therefore all these oil imports go salaries so we have to involve the private sector to generate another economy parallel to the state’s economy to does not depend on the proceeds of oil and strive to improve aspects of the many economy.

“The prime minister pointed to” the Council of Ministers very hard to reduce government expenditures to the maximum extent possible and have already succeeded in this reduction and we were able to pass the budget in 2015, although they represent 40% of what it was in the past years due to lower revenues Oil, however we were able to walk the state and continue to fight Daash and secure the military expenditure of the weapon and ammunition as well as continue to support citizens’ services.

“He stressed Abadi, that” this effort will continue to do but needs to support the citizen by turning the waste and the fight against corruption “and called on citizens to” detect any the case of corruption figures are supported to make corrupt they live in fear direct current, and we opened several files to people who are corrupt in this country and will end these files correctly by eliminating the competent courts.

“The prime minister expressed hope that his visit to New York, the two-day” successful and provide more support for Iraq in his war on Daash and be in the ranks of developed countries.
http://www.ikhnews.com/index.php?page=article&id=141648