© Dominick Reuter/Agence France-Presse — Getty Images Secretary of State John Kerry with Sergey V. Lavrov, the Russian foreign minister, on Sunday.The Iraqi military announced Sunday that it had agreed to share intelligence about the Islamic State with Russia, the Syrian government and Iran, an agreement that caught the Obama administration off guard.

The Iraqi military said in a statement that the new agreement was necessary because thousands of volunteers who have joined the Islamic State have come from Russia. Asked if he welcomed the accord, Secretary of State John Kerry said it was important that the United States and Russia coordinate.

“I think the critical thing is that all of the efforts need to be coordinated,” Mr. Kerry said at the start of a meeting in New York with Sergey V. Lavrov, the Russian foreign minister. “This is not yet coordinated. I think we have concerns about how we’re going to go forward, but that’s precisely what we’re meeting on to talk about now.”

As Russia has engaged in a military buildup at an air base near Latakia in Syria, President Vladimir V. Putin has sought to assemble his own coalition against the Islamic State, one that includes the Syrian government and Iran.

The effort, which Mr. Putin is expected to underscore in his speech at the United Nations on Monday, appears designed to increase Russia’s influence over efforts to resolve the Syrian conflict. It not only puts Russia in a position to support President Bashar al-Assad militarily, but it could enable the Kremlin to influence the choice of a successor if Mr. Assad were eventually to leave power.

With about 3,500 American advisers, trainers and other military personnel in his country, Prime Minister Haider al-Abadi of Iraq has cast himself as a vital member of the United States-led coalition to combat the Islamic State, and has not joined the Russian-led coalition.

But Iraq has also quietly enabled the Russian military buildup in Syria and has cooperated with Iran, from which it receives military support. While Bulgaria closed its airspace to Russian transport planes headed to Syria at the request of the United States, Iraq has allowed the Russian flights to use its airspace. Virtually all of the Russian transport planes that have flown weapons and equipment to the air base near Latakia have crossed through Iraqi and Iranian airspace.

“We did not violate any of our commitments toward the international community,” Ibrahim al-Jaafari, Iraq’s foreign minister, said when he was asked about the Russian flights during a Friday appearance at the Council on Foreign Relations.

Iraq is buying aircraft and other weapons from Russia. But American concerns that Mr. Putin might be trying to draw Iraq into the Russia-led coalition grew last week when a group of Russian military officers were observed in Baghdad.

Russia did not provide advance notice to the Obama administration of its decision to deploy attack planes, fighter aircraft, tanks and other military equipment near Latakia.

Asked about the purpose of the agreement announced by the Iraqi military Sunday, Mr. Lavrov said it was to “coordinate the efforts against ISIL,” using an acronym for the Islamic State.

Mr. Kerry, however, stressed that there was much to be done if the two sides were to effectively coordinate.

“Our presidents will be meeting tomorrow,” Mr. Kerry said. “This is the beginning of a genuine effort to see if there is a way to de-conflict, but also to find a way forward that will be effective in keeping a united, secular Syria that can be at peace and stable again without foreign troops present, and that’s our hope.”

A senior State Department official, who briefed reporters after Mr. Kerry’s meeting with Mr. Lavrov on the condition of anonymity, said that the two diplomats had not discussed the new Iraqi intelligence accord. “We’re just at the beginning of trying to understand what the Russians’ intentions are in Syria, in Iraq, and to try to see if there are mutually beneficial ways forward here,” said the official. “We’ve got a long way to go in that conversation.” 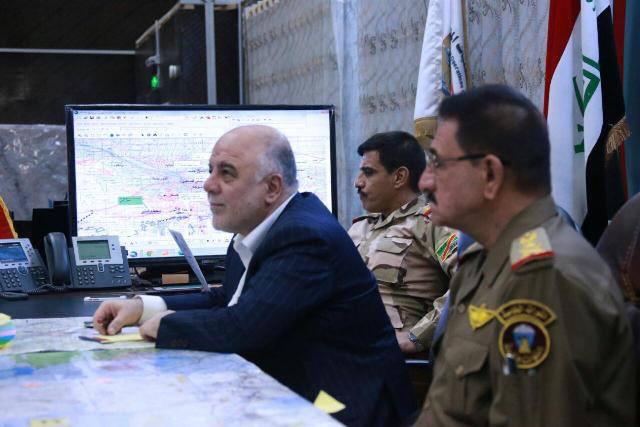 Like Loading...
Alsumaria News / Baghdad
It announced the Office of the Prime Minister Haider al-Abadi , Monday, for the latter went to New York at the head of a ministerial delegation to attend the meetings of the General Assembly of the United Nations.
To be continued …
https://translate.googleusercontent.com/translate_c?depth=1&hl=en&prev=search&rurl=translate.google.com&sl=ar&u=http://www.faceiraq.com/inews.php%3Fid%3D4225274&usg=ALkJrhiwdGASafEr8FV1JM0CFR5aWufkkg

BAGHDAD – Iraq-Presse – September 28 / September: General Secretariat of the Council of Ministers announced on Monday, the disruption of the official working hours in all government departments in the Iraqi capital Baghdad and all the provinces.

Word in a flash aired on Iraqiya state television that “the General Secretariat of the Council of Ministers announced that on Monday, an official holiday in Baghdad and other provinces to the occurrence of the feast, on the weekend,” he said, adding, that “on Thursday was the first day of Eid al-Adha, as announced honesty General of the Council of Ministers that is the four-day holiday beginning on Thursday and ending on Monday. “

The Council noted in a brief statement to that “always disable Monday, came to the occurrence of the feast, on the weekend, Friday and Saturday,” without further details. Ended O.h

Harbi said media cell, Sunday, killing dozens of elements Daash and burning Jlatm in different parts of the country, as it continues to provide military units to liberate the rest of Iraqi territory to release it from the terrorist organization Daash.

She said the media cell in a press statement, said that “the federal police in Anbar province, and after receiving intelligence information managed to kill eight terrorists, including a senior leader in the organization and the burning of 8 wheels in addition to the killing of eight others were also killed tried to exposure to pieces of the federal police in Tel Sheikh Massoud region”, pointing out that “the international coalition carried out an air strike in Salahuddin killed three terrorists and burning Jlthm in the city of Baiji.”

He added that “the leadership of the island were carried out a joint operation with the popular crowd at Albu-life area that killed four terrorists, noting that” the face of the international coalition against targeted the headquarters of the elements Daash in a leap City air strike resulted in the destruction Headquarters fully and killed about 38 terrorists and the destruction of more than 7 Wheels”.

The statement continued that “the number of sorties Slaj air security forces reached 6 sorties managed through the destruction of the entire convoy belonging to the terrorist organization while sorties Pocket flight of 24 sorties in all sectors of the provincial operations,” adding that “flight international coalition carried out 27 sorties It killed 22 terrorists and the destruction of 4 wheels in different locations. “

Called on the Prime Minister Haider al-Abadi, on Sunday, to sustain the momentum of victories in the breakers operations, especially in Anbar province, as issued directives to strengthen the morale of the fighters group, stressed the importance of benefiting from the intelligence effort on the ground, as well as provided by friendly countries and the Alliance Aldolipema Shan against (Daash ).

Information Office of the Prime Minister Haider al-Abadi said in a statement received (range Press) copy of “The Prime Minister and Commander in Chief of the Armed Forces Haider al-Abadi briefed on developments in the security situation in the breakers operations, especially in Anbar province, while attending Sunday night to lead the Almstrkht operational headquarters.

Abadi said through the statement “the importance of sustaining the momentum of victories achieved and the liberalization of areas occupied by gangs (Daash terror).”

The statement continued that “the Prime Minister issued a set of guidelines that contribute to strengthening the morale and victories of our troops heroine stationed in the land battle, also stressed the importance of benefiting from the intelligence effort on the ground, as well as provided by friendly countries and the international coalition about the elements of Daash terrorist networks outside Iraq.” .

Information / follow-up / ..
The newspaper “Yediot Ahronot” reported that the British army sent members of the special forces “commando” to Iraq for the control of chemical weapons stolen by organizing “Daash” from the Syrian army.
Israeli newspaper said that the main reason behind the operation is receiving information indicating that Daash intends to use these weapons in the hit strongholds of the Kurdish eastern Iraq.
The newspaper said that sending element 60 of the commandos were to burn these weapons, pointing out that the bombing of its stores will lead to disaster Fbmut thousands of asphyxiation in Alarac.anthy / 25
https://translate.googleusercontent.com/translate_c?depth=1&hl=en&prev=search&rurl=translate.google.com&sl=ar&u=http://www.faceiraq.com/inews.php%3Fid%3D4224997&usg=ALkJrhgmOaUqa8iOXi4X0thTriJ9AVykog

Chairman of the parliamentary security and defense of quitting confirmed that the Iraqi judiciary has not taken any action so far in connection with the investigation with the accused involved in the case of the fall of the city of Mosul, however, state regulation.

Zamili said that “this file is important and serious and touches the life of the security and stability of the institution.”

He pointed out that there are accusations of several prominent figures, saying “the committee set up by Parliament has the right profile and its follow-up mission ends to hand over the file to the government and the judicial authorities concerned.”

And add “will be the follow-up investigation file after the Eid al-Adha holiday, and was referred to the elimination of the accused or from whom a warrant was issued an arrest.”

He denied Zamili the government to withdraw the investigation file of the judiciary, noting that the investigative Commission has sent the file to several destinations including to the Office of the Commander in Chief of the Armed Forces, and to the Minister of Defense, and to the prosecutor general, and military courts, and to the President of the Supreme Judicial Council, and all these actors have received a copy of the final report

Prime Minister Dr. Haider Abadi, emphasizes the importance of benefiting from the intelligence effort on the ground, as well as provided by friendly countries and the international coalition on the terrorist networks to Daash elements outside Iraq.

Announced Joint Special Operations Command, on Sunday, the presence of security and military cooperation with Russia, Iran and Syria in Baghdad to eliminate the terrorist organization Daash.

The command said in a statement received, / scales News /, copy it, that “Iraq form over the past months, several committees for cooperation in the security and intelligence spheres with the countries expressed their willingness to cooperate with Iraq in the fight against terrorism and the fear of the expansion of terrorist Daash gangs.”

She shared leadership, according to, “It was also agreed on a security intelligence co-operation in Baghdad, with both Russia and Iran and Syria to help and participate in the collection of information on the organization of Daash terrorist and its extensions,” adding that “it came up with the growing Russian concern about the presence of thousands of terrorists from Russia, who their criminal acts with Daash, “stressing that” Iraq is involved in this field with representatives from the military intelligence “.anthy 29/9 P