Bloc citizens demanded the government to form an independent military tribunal to hold accountable and prosecute what it called traitors perpetrators of the fall of the city of Mosul.

A statement of the bloc Natqah citizen MP Mohammed al-Masoudi as saying that what happened in Mosul was the beginning of the security of the collapses that occurred in other areas and whose results were the fall of the city, however, the terrorists Aldoaash calling (trial for negligence and defeatists responsible for the fall of Mosul).

Masoudi He pointed out that in addition to the fall of the city of Mosul has brought another such massacre Spyker and the fall of Alsjr and Saqlawiyah considerable material and human losses and said that this indicates the presence of a significant shortening of the group of military leaders who formed their right boards investigative and demanded commissioned prosecutor has the responsibility to defend for spirits and public money and shortened trial heads and Almtakazlh.

The parliamentary committee in charge of the investigation in the fall of Mosul, today announced it had raised its final report to the Presidency of Parliament, including findings of facts to complete all his other binding legal proceedings in accordance with the rules of procedure of Parliament.

[dir=ltr][dir=ltr]
Information / special / ..
Said the legal expert Ali al-Tamimi, Sunday, that the survival of the Chief Justice Medhat al-Mahmoud Council his job an Iraqi law, as called for the appointment of a new head of claim in general and not by proxy.
He said al-Tamimi told / information /, that “judicial reform boils down to the exclusion of the President of the Judicial Council, because he is not appointed by a presidential decree was not voted on by the Parliament, at the age of 80 years and this violates the 160 Judicial Organization Law of 1979, is also chairman of monounsaturated Court and this is contrary to Article 91 proceedings.”
He added that “reform must appoint a new head of claim in general and not by proxy, as well as the appointment of the head of the judicial oversight body, and the appointment of the President of the Court of Cassation, which is the President of the Judicial Council, and the abolition of the Central Criminal Court and the Court of Media and Publishing.”
“The increase in the number of judges and the resolution of the detainees is an important step You also must be included among the judicial reform, as well as the appointment of a large number of judicial investigators, protections and reducing the number of judges and judicial police, and the creation of courts in remote areas.”
Tamimi called “Cancel general managers in the Judicial Council and the appointment of secretary-general only, and be a spokesman for the Judicial Council media, not the judge, and the replacement of members of the Committee judges Affairs to hold negligent, and a review of the previous laws such as the Judicial Organization Law and Public Prosecution.”
He also called for “legislation of the Federal Court Act”, calling for “Astqlaih judges of integrity for the presidency of the appeal, as well as re-retired judges, who excluded them former President Saddam Hussein for political reasons, and work to amend the Constitution, and the transition to a presidential system,” .anthy / 25’s

Assure no one above the law and the accountability of the people, and the elimination of Saguets and perpetrators involved and negligent. # Tgarir_ganh_thakiq_sagot_almousel 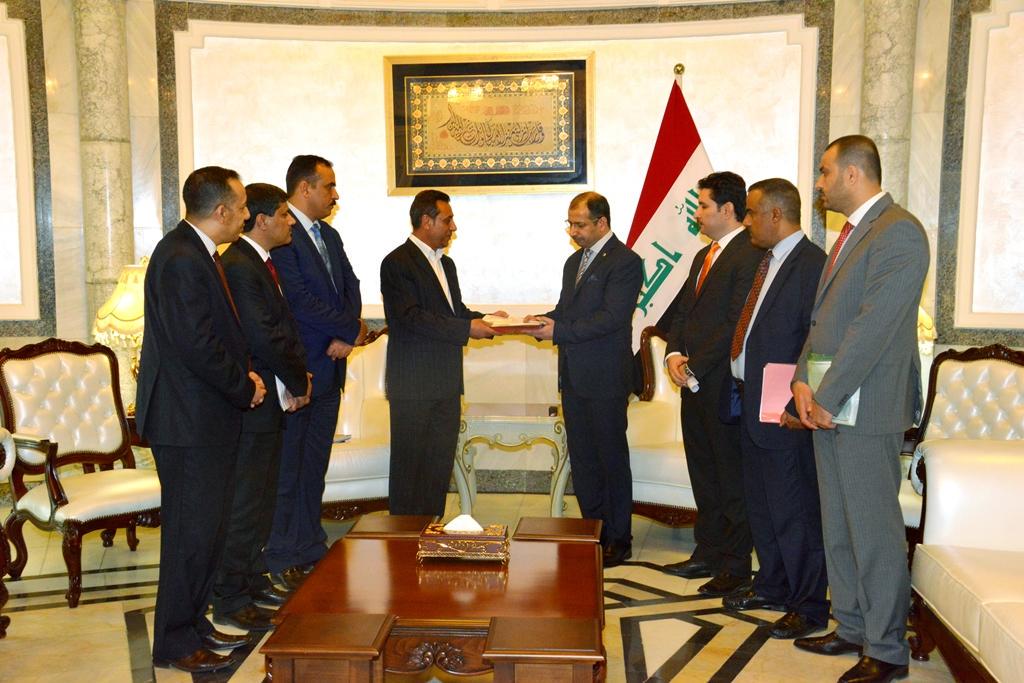 Detection of the security committee in Baghdad Provincial Council member Saad logistical, Sunday, that the Baghdad Operations decided to change the map of checkpoints in the capital against the backdrop of declining security situation in Baghdad several days ago.

He said logistical L / scales News /, “The governor of Baghdad, Ali al-Tamimi and the head of the provincial council Riad dentex and members of the Council met, on Thursday evening, with the commander of the Baghdad Operations Lt. Gen. Abdul-Amir al-Shammari and all security leaders against the backdrop of the deteriorating situation in the capital Baghdad over the past few days.” noting that “the leaders of the Baghdad Operations decided to change all the security leaders in Sadr City immediately due to security breaches.”

It is said that “the security committee in the Baghdad announced on Sunday that the security meeting held in the provincial council decided to change all security leaders in Sadr City immediately, noting that he also decide to make the meeting open and the formation of fixed workshops” .anthy 29/9

Informed sources revealed on Sunday that the Lebanese customs authorities detained (20) bag large size to come on board the Iraqi Airways plane within them millions of dollars and alloys Alzhbah.oukalt sources: “These bags belonging to two people a man and a woman holding diplomatic passports.” He added “The two claimed that the bags belonging to the official Iraqi high-level source on condition of anonymity,” asserting that “the Lebanese authorities are now conducting investigations in this regard with the hand on the bags,” adding that “investigations of this issue continuously until now” .ochhd the country during the the past few weeks a wave of major protests to demand the elimination of financial corruption and administrative system files and to bring the perpetrators of corruption and money laundering to the judiciary.