Baghdad (AIN) –The Speaker of the Parliament, Salim al-Jobouri, hosted the US Assistant Secretary of State, Brett Makourk, and his accompanying delegation at his office in Baghdad on Saturday.

The media office of Jobouri reported in a statement received by AIN ”The meeting tackled the recent security and political updates especially the war against terrorism forces.”

”Jobouri assured that the stability in Iraq is the corner stone for the stability of the whole region where all sides should cooperate to achieve that,” the statement concluded. \End\

Confirmed stalwart U.S. support to the GOI and the ISF under Iraqi command in their efforts to destroy #ISIL. 2/2 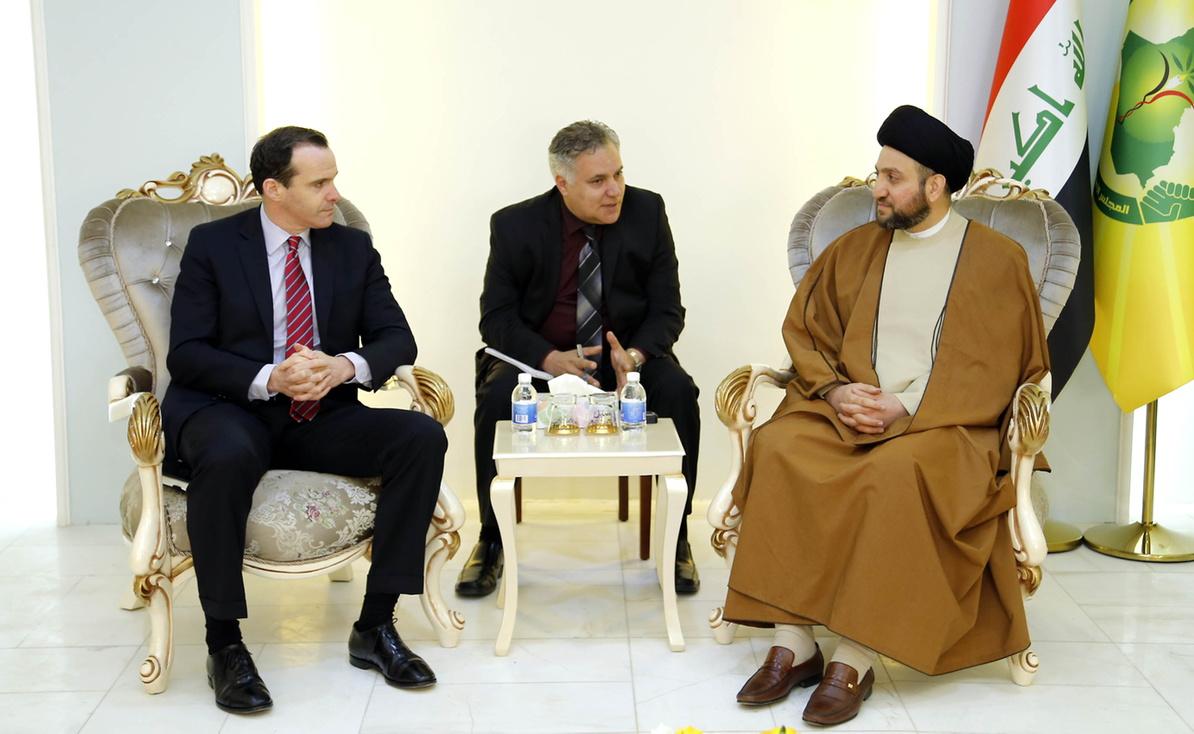 The head of the parliament, Saleem al-Jubouri, Saturday, that the stability of Iraq is a “cornerstone” of the stability of the region, and that it is in everyone’s interest to work on his support in all areas, while some expressed the US State Department for the attention of the international community, and Washington, of the situation of Iraq, and their eagerness to ” restoration of conditions and restore status. “

This came during a meeting with Chairman of the Iraqi Parliament, Saleem al-Jubouri, today, in his own office, the US Assistant Secretary of State, Brett Makourk, him and his accompanying delegation, to “review the developments in the political situation, and the latest regional developments, especially the war against terrorism,” according to a statement the media to his office, took over the (long-Presse) a copy of it.

Jubouri said, during the meeting, that “Iraq is on its way to bypass Daash stage”, adding that “the struggle waged by Iraq with terrorism, and his successor calls for more international support in all areas.”

Promised the Speaker of Parliament, that the “post-Daash no less importance and seriousness of the current phase, which requires preparedness and thinking about them,” stressing that “Iraq’s stability is the cornerstone of stability in the region, and in everyone’s interest to work on it.”

It is noteworthy that the joint Iraqi forces, including the army, police and a crowd Hbaa and clans, as well as the Peshmerga forces, started since the beginning of the current March 2015, achieving decisive victories against (Daash) to his expulsion from areas seized by since the last tenth of June 2014.

{Baghdad: Euphrates News} MP for the coalition of Iraq Abdel Azim Ajman solidarity that the government and the House of Representatives sponsor the fight against rampant corruption in the country.
He said the Attorney Ajman told {Euphrates News} “The file corruption is one of the most difficult to be detected and processed files; it may shift from corruption spontaneously to systematically He needs a long period of honest and pause by the government and parliament, both to be treated.”
Among Ajman that ” Who says he can handle this file in a short period, he is mistaken; it is due to the accumulation of the dictatorial regime for a long period, but it certainly will disappear but through the solidarity of the parliament and the government. ”
confirms specialists that the financial and administrative corruption file is one of the most difficult duty of the government and the House of Representatives files paced urged as part of combat, treatment and elimination; the effects on public life in the country.
and take the corruption in the country’s multi-climax, including bribes and commissions and overtaking on the theft of public money and other, they are mostly far from the principles of the Islamic religion and professional standards and norms and values ​​of Iraqi society. Ended tc
http://wwww.alforatnews.com/modules/news/article.php?storyid=79361

{Baghdad: Euphrates News} MP for the coalition of citizen Amer Al-Fayez said the issue of non-oil sectors of activation to be synonymous him is a matter of time.
The MP said Fayez told {Euphrates News} “There is a lack of interest in some of the details leading to the activation of sectors, and despite the fact that investing in the country’s law is attractive, but some things and belongings and mechanisms to implement it is repulsive.”
He said Fayez “The Federal Court has stripped Parliament legislative expire until now can not help but wait for the coming of the bill from the government. ”
Because of the financial crisis, the state looking activation of sectors other than oil to supplement the general federal country’s financial budget, and not rely on oil as a resource and sole shall be subject to such crises.
confirms Followers of the affair Iraqi that the country is rich in resources and its resources and wealth of human and creative energies that can operate, develop and elevate the country’s refineries, advanced to the state provided reliance on strategic planning and sustainable development. Ended x H
http://wwww.alforatnews.com/modules/news/article.php?storyid=79349

{Baghdad: Euphrates News} confirmed the Commission on oil and energy parliamentary member Razak Mheibes Lajimi, on Saturday, the government asked the Commission to postpone the law of oil and gas to the presence of talks around it.
He said Lajimi told {Euphrates News} that “there is a great desire on the part of the oil and energy parliamentary passing the oil and gas law because of its paramount importance in the lives of Iraqis, legal and administrative issues that regulate oil wealth management in the country.”
He explained, “We got a book recently from the government asks wait passage of the law to the presence of talks on the law. ”
It is said that the oil and gas law of the controversial law, which has been postponed for several parliamentary sessions because of the lack of political blocs agree on approval.
The oil minister Adel Abdul-Mahdi had said earlier that the absence of a law on oil and gas is the main reason for the current crisis in the country .anthy
http://wwww.alforatnews.com/modules/news/article.php?storyid=79321

{Baghdad: Euphrates News} MP for the coalition of citizen Shawqi properly torque the House of Representatives pass laws, which would facilitate the process of investment and investors to enter Iraq.
He Shawki told {Euphrates News} today that “there is a trend of the House of Representatives approval of laws that allow for investment, both in the private sector or the public, and facilitate the entry of investors and provide projects for the citizens.”
“We are in the House of Representatives are determined on the issue of service to the citizen, although the State suffer from the financial crisis as a result of lower oil prices. ”
The Ministry of Planning finalization of the economic plan for the years {2015 to 2018} in order to improve the standard of service and living conditions for the Iraqi people.
The ministry said in a statement that “the program is based on upgrading the service and the standard of living of the citizens of During the development of the economy and ensure consumer protection, and the resolution of the Iraqi economy is headed toward a market economy and give the state a gradual economic activities and the development of foreign trade and transit trade, free zones and to reconsider the financial, fiscal and monetary policies. ”
The Undersecretary of senior religious authority in the holy city of Karbala, Mr. Ahmad Safi called earlier to the need for government attention to the agricultural sector, and to support the farmer and the farmer and the protection of the local product.
Mr. Ahmed net “has already been mentioned that the attention to the agricultural sector has great positive returns on the country, otherwise the negative returns also great, and the state should encourage the farmer and the farmer to hold on to their land, cultivation and support . ”
Mr. net and pointed out that “food security is one of the things the country’s sovereign Among the support is not flooding the market with some foreign products at a time may be available locally in abundance, it must feel the farmer reassured if they think the reclamation of the land, that finds state protected “.anthy tc
http://wwww.alforatnews.com/modules/news/article.php?storyid=79356

Follow-up – and babysit –Rafidain Bank confirmed his quest hard to open up the banking cooperation at the Arab and international levels ..

The general director of the bank on behalf of Kamal al-Hassani said in a statement to his press office that the bank plans to open horizons of cooperation through the establishment of a banking relationship with the Arab States and the world aimed at increasing the volume of foreign banking transactions through opening letters of credit and the issuance of letters of guarantee and an investment and foreign remittance operations.

He noted that the bank seeks to achieve more supportive of the national economy achievements and keep up with the conclusion reached by the developed world in the banking systems. Q, Q

BAGHDAD / Baghdadi News / … senior parliamentary source said on Saturday, hosting the Director General, former commander of the armed forces by the Office of the relevant committee to investigate the facts about the reasons for the fall of Mosul.

The source said to the reporter / Baghdadi News / that “the relevant committee to investigate the facts about the reasons for the fall of Mosul, will host today Farouk al-Araji, director general, former commander of the Armed Forces Nuri al-Maliki’s office.”

The source added that “the Commission will host Araji for interrogation about a number of files relating to the fall of Mosul, which had hosted a group of leaders and officers and the governor of Mosul Liberation of Iraq.”

The source added that “the coming days will see a host of year, the former commander of the Armed Forces Nuri al-Maliki.”

Referred to the city of Mosul, Nineveh province, (405 km north of Baghdad), has seen since the dawn on Friday, June 6, 2014, violent clashes between the elements belonging to the organization, “Daash”, who were deployed in the western areas of the city, and the security forces, he fell in evacuated dozens of dead and wounded among the parties, as the clashes led to a mass exodus of the people of the city for safer areas outside the province and within.Ended M / L

BAGHDAD / Baghdadi News / … The President of the fact-finding committee of the reasons for the fall of the deputy governor of Mosul Zamili, Saturday, for lack of any red lines with the Commission, and it is determined to uncover the full truth.

He Zamili, at a news conference at the parliament building attended / Baghdadi News / “The host Farouk al-Araji, director general, former commander of the Armed Forces Nuri al-Maliki’s office will develop the investigation dramatically,” adding that “al-Araji, one of the most important joints major in command of the armed forces, he is one of those responsible for a lot of hops and promotions that have occurred in the al-Maliki, and that many of the decisions taken at the time his advice. ”

He Zamili that “as soon as Rod and the necessity to host the former commander of the armed forces, Nouri al-Maliki, his name will be put to a vote of Parliament sessions for hosting.”

Zamili revealed that “the coming period will witness hosting and current defense minister, Khalid al-Obeidi and former Saadoun al-Dulaimi, the senior agent of the Ministry of the Interior, former Adnan al-Asadi.”

He stressed that Zamili “web hosting will include a group of soldiers and police who were serving in Mosul to find out the whole truth.”

Zamili and pointed out that “the two months that we have been awarded from Parliament in the period of investigation is not enough, and we will need an additional two months to complete the investigation.”

Zamili noted that “some of the media pointed out that the committees usually begin and end without knowing the results without disclosing the facts,” stressing that “the Commission will host all and will not bow to any bargains and does not have any red line in uncovering the facts.” Ended 21 / l