Multiple fronts in the broadening war on ISIS in Iraq. http://bit.ly/isis-maps 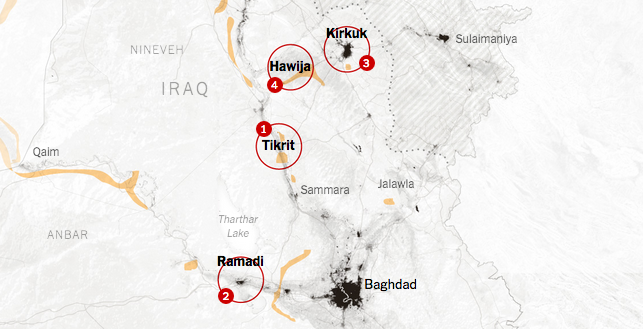 Assistant Secretary of State for Educational and Cultural Affairs Evan Ryan will join Assistant Secretary of Homeland Security for Immigration and Customs Enforcement Sarah Saldaña and Iraqi Ambassador to the United States Lukman Faily on Monday, March 16, 2015 at 11:00 a.m. to repatriate more than 60 items which had been smuggled into the United States.

The return of these items demonstrates the United States’ commitment to cultural preservation and respect for the heritage of other countries. At a time when ISIL is destroying the ancient monuments and artifacts of Iraq’s rich history, the United States continues to work towards preserving its historical legacy for the Iraqi people and for the world. This repatriation comes in the framework of increasing U.S.-Iraq cooperation in matters of cultural heritage preservation under the Agreed Framework Agreement between the two countries.

The repatriation ceremony will be held at the Consulate of Iraq, 1801 P Street, N.W., Washington, D.C. Reporters who wish to cover the event must RSVP to Brandon.A.Montgomery@ice.dhs.gov. Media can arrive at 10 a.m. and be in place no later than 10:30 a.m. Valid media credentials are required to attend.

A spokesman for the US Department of Defense [Pentagon] on Friday, wounding a US soldier was slightly injured, the incident of shooting on Basmajh base southeast of the Iraqi capital Baghdad, on Wednesday.

He said Pentagon spokesman Steve Warren in a press statement “that wound hit the nose of the soldier, who was on the observation tower at the base – where there are about 100 military American who when he noticed a light from a distance before he had seen a flash of a strong voice, which in turn responded to the sources fire. “

He pointed out “that he does not know yet if the injury was caused by a gunshot over near the soldier or fragments of concrete embankment after being shot.”

Warren pointed out that “this incident has not been announced previously because the information received from the base was still under scrutiny, at a time between when the soldier returned on the same day after treatment to his wound,” .ant

The US State Department announced that it plans to hand over Iraq more than 60 artifacts were smuggled into the United States.

He said a statement that “the Assistant Secretary of State for Educational and Cultural Affairs Evan Ryan and Assistant Secretary of Homeland Security for Immigration and Customs Sarah Saldaña, Stsalman Iraqi ambassador in Washington, Luqman Alfeli more than 60 pieces of ancient Iraqi had been smuggled into the US territory.”

He said the “artifacts delivery comes as part of increased cooperation between the United States and Iraq in the preservation of cultural heritage issues under the Strategic Framework Agreement between the two countries.”

The US State Department that “the return of these artifacts show the United States’ commitment to the preservation of the Iraqi people and the world historical heritage” .an

President of the Kurdistan region Massoud Barzani met on Friday, the former head of the CIA, and the former commander of US forces in Iraq, David Petraeus.

A statement issued by the Presidency of the Kurdistan Region, and seen by Roudao network media, that “The meeting focused on the discussion of the latest political and security developments in Iraq and the region, and the risks posed by the organization Daash to international peace and security.”

The statement also pointed out that “Petraeus expressed his admiration for the progress made in the Kurdistan region,” Barzani congratulated “the victories of the Peshmerga forces in its conflict with al Daash”, and praising the brave fighters Peshmerga role.

He told the former head of the CIA, condolences to the President of the Kurdistan Region and the martyrs of the Peshmerga and the pan-Kurdish people.

(Independent) … the House of Representatives resumes its sessions on Saturday to read the report of one of the committees and the first and second readings of a number of draft laws.

According to a statement of the Department of Media Council received a (independent) a copy of it, that “the meeting include the reading of the Committee on Culture, Media Report.”

The House of Representatives to raise its twenty Thursday was held under the chairmanship of Salim al-Jubouri, and the presence of 263 deputies to on Saturday. (End) / P /

BAGHDAD / Source News / .. World Food Programme announced today the urgent need for about $ 45 million to continue its emergency operation in Iraq until next June.

She explained, director of the Information Office of the program Elizabeth Byers told a news conference today that “the humanitarian situation in the cities of Samarra in Salahuddin province and al-Baghdadi in Anbar province is getting worse and now thousands of people in dire need of basic humanitarian assistance such as food, clean water and medicine.”

She Byers said, “Reports from Salahuddin province, indicating that more people were still arriving in Samarra because of the ongoing military operations and was the city of al-Baghdadi, in Anbar province and other areas under siege for weeks with the presence of thousands of Iraqis who are suffering from a lack of basics necessary.”

She noted that “WFP was able to distribute three thousand meal ready to eat enough to feed 15 thousand people for three days in the besieged city of al-Baghdadi.”

According to the Director of the Information Office of the World Food Programme that “fighting in Tikrit make people flee from there, but the program respond to the crisis sent shares of food to Samarra and Tuz in Salahuddin province, enough to feed 50 thousand for three days, in addition to other emergency supplies for purposes other humanitarian agencies “.

Byers confirmed “ready to deal with the influx of people fleeing the fighting in Tikrit,” noting that “stores in Baghdad still have enough food to feed 75 thousand people, but for only three days.”

In Baghdad, Byers pointed to a program to distribute food enough to feed three thousand people displaced families from Tikrit and al-Baghdadi, who were able to move to the Iraqi capital.

She said, “Food prices rose more in the most vulnerable to conflict sites where increased rice and wheat prices more than doubled in Salahuddin, Anbar and Kirkuk,” .anthy / e

Security Committee announced in the House of Salahuddin province, the liberation of the city of Tikrit, elements of the terrorist organization Daash fully except government palaces area, which lies to the east of Tikrit.

The deputy chairman of the security committee in the Council Khalid Khazraji in a statement to Radio tow the next few hours will purge government palaces of Daash, indicating that the elements Daash resorted to escape the limitations of government provides security forces and the popular crowd.

He Khazraji that our troops are currently working on clearing the liberated areas in Tikrit of roadside bombs planted by Daash and remove mines from main roads and Alnisemeh.

Confirmed the Information Office of the Iraqi Prime Minister Haider al-Abadi, on Friday, that the Iraqi government “is not interested in” what the media or the American public or Congress about the “concerns” of the role of Iran or militias “irregular” the issue of the war against saying (Daash), while He pointed out that Iraq uses all forms of support from the countries of the region and the world, a position that “dispels and removes the” US concerns.

A spokesman for the Information Office Saad newborn in an interview with the (long-Presse), “The Iraqi government is not concerned with what the media or the American public or even the Congress is saying, on the fear of the role of militias or armed groups irregular or Iranian role the issue of the war against the (Daash ). “

Sabri added, “but at the same time, the official US rhetoric, which provides, whether for political or military officials during their meetings with the Iraqi prime minister, is not in conformity with what it offers to the media and the US Congress sessions of concerns.”

Sabri said, “The US administration management are realistic and realize that there is a strong and influential in the region, although there is a challenge to Iraq,” noting that “Iraq uses all forms of support from the countries of the region and the world to confront terrorism.”

He newborn, that “this is the position that carries the American side is trying to dispel and eliminates concerns they have, against the backdrop of what is happening on the ground in Iraq,” noting that “visits and meetings convened by Iraq with the US side, has not been raised, and that will reduce or refrain from aid Introduction of Iraq, it is also the day did not reduce the overflights or support for our troops. “

However, newborn, “Although the coalition forces were not involved in the liberation of Salahuddin operations, but this matter and according to Iraqi field commanders because he were not there is a need for air strikes to the coalition forces, although it also does not mean we will not we use their other battles.”

Often speaks of the US media and some members of Congress, on fears of Iranian influence in Iraq or on the activity of armed groups and popular crowd, while American officials express fears also the possibility to turn some of the popular crowd practices involved in the battles controlled by Areas ( Daash) operations for revenge after its liberation.

The organization (Daash) executed, in (June 15, 2014), dozens of students from the College of the Air Force base (Spyker), north of Tikrit, days after the surrender, and as he emphasized that freed 800 of the students as “the order of Abu Bakr al-Baghdadi” published pictures of the execution, could not be “long” confirm the information from other sources.

It is noteworthy that the security forces and the popular crowd and tribal members, embarked on since (the first of the current March 2015), and extensive security operation to cleanse the province of Salahuddin, based in the city of Tikrit, the organization (Daash).

The seized organization (Daash) in the (11 June 2014 the past), the city of Tikrit, and spend the role, the hometown of Izzat al-Duri, without a fight, and spend Sharqat, (120 km north of Tikrit), while managing and tribal police forces of expulsion spend Dhuluiya, (100 km south of Tikrit).