Follow-up – and babysit –revealed close to the prime source of the House of Representatives, that the report of the parliamentary committee in charge of the investigation in the case of Base Speicher will be presented in a closed session.The sources of the parliamentary committee in charge of exposing the realities of crime Spyker has completed its report and sent him to the presidency of the parliament, pointing out that the Presidency of the Parliament will be held during the next few days meeting with faction leaders to discuss the report, which identified those Shortened and make recommendations to the government to conduct necessary.

The source added that he was supposed to read the report in the last session, but the Presidency has delayed submission to Parliament to a special session preceded by a meeting of the Presidency of the parliament with the leaders of the blocks, the sensitivity of the subject, and may result in negative consequences, adding that the meeting will be closed in accordance with the decision taken under Dome of the legislature.

To that announced ADP she “wants to be characterized by a global basis through the inclusion of a car, the Rolls-Royce Phantom to its fleet, making it the most luxurious police car in the world, with the United Arab Emirates continues to global excellence after the city of Dubai has provided the fastest police car fleet in the world,” noting that “one-car price of 475 thousand US dollars.”

Follow-up / Source News / .. announced the chairman of the pillars of the General of the Armed Forces of the Iranian Aalloa Hassan Vیrosabaden, Iran will not have a military presence in Iraq.

Major-General in an interview today and I followed Agency / Source News / .. “The country is unwilling military presence in Iraq and said that each bear country soldiers responsibility of defending the homeland and the maintenance of their rights and we are in this sense reject any presence of foreigners in Iraq, saying the presence of Maj. Gen. Qassem Soleimani One of Iran’s Revolutionary Guard commanders in Iraq under the provision of advisory support to Iraq only. / finished agencies n

Brother – Baghdad
Rafidain Bank announced the use of advanced banking technology for users of smart card in all its branches inside and outside Iraq.

The general director of the bank on behalf of Kamal al-Hassani, Saturday, in a statement received for News Agency (et) a copy of the “bank branches throughout Iraq provided full services for users of smart card such as issuing or withdrawn and the various groups.”

He said al-Hassani said “the bank went quick and advanced towards the use of banking technology that will help the steps and contribute to building the capacity of employees to be reflected positively on their customers.”

The Rafidain Bank proceeded to make the smart card, to its customers in four Arab countries are the United Arab Emirates, Egypt, Lebanon, and Jordan, as well as the issuance of its customers in Iraq.

The General Director of the bank, Mohamed Abdel-Wahab said in a statement , “I got direction Press , “a copy of it, today that “the new regulations issued by the Rasheed Bank allows the citizen review of a number of branches that have been allocated for the disbursement of funds deposited instruments calculates the open body with the bank.”

“The ad hoc branches in Baghdad is {-23 Karkh Karkh district, and 520 by the student branch Alrsafh- Alboshjaa 519}, {Babacrker In Kirkuk province – Branch June 1}, either Anbar province will be in gray} {branch, and in Salahuddin province Samarra} {branch, “noting that” it is among the priorities of our work is to provide facilities to the citizens in the hot spots, as well as displaced them to ease their suffering in banking transactions. ”

On the other hand said Abdul Wahab said, “There are other facilities for retirees in the hot spots were allocated two branches in Baghdad to pay salaries and two {Yarmouk branch -lmottagaeidi Nineveh province}, and {} Salehia branch of retirees Salahuddin province.” A senior delegation from the Ministry of Peshmerga starts in the Kurdistan Regional Government’s visit to the Iraqi capital, Baghdad, to discuss with the Federal Ministry of Defense about the benefits of the Peshmerga and the war against the terrorist organization Daash.
Headed heading the delegation to Baghdad by private jet belonging to the Iraqi Ministry of Defense, headed by team Shirvan Abdurrahman team Jabbar Yawar, where he will meet the delegation with the joint Supreme Security Committee to discuss the Peshmerga budget file, according to the budget scientist to Iraq to 2015 Act, as well as to discuss the fight against al Daash file, and how to coordinate and cooperation between the two sides on this issue. – See more at: http://translate.googleusercontent.com/translate_c?depth=1&hl=en&prev=search&rurl=translate.google.com&sl=ar&u=http://www.dijlah.tv/index.php%3Fpage%3Darticle%26id%3D181266&usg=ALkJrhikaTzT3tAXqr0Yzjn7l4qzMAV7Iw#sthash.yMjy7Qm6.dpuf 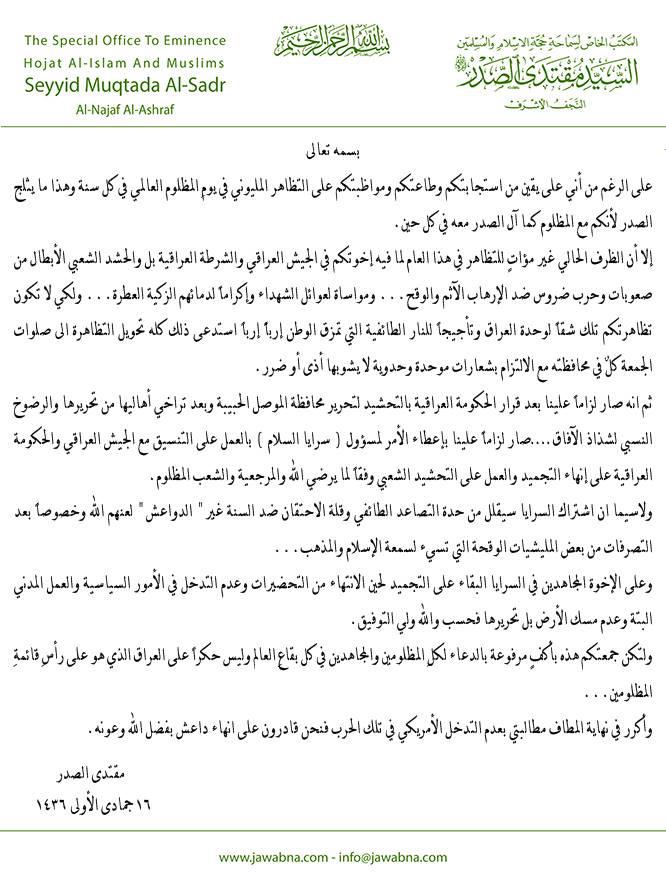 Pictures of the 2000 year old City of Hatra, UNESCO world heritage site. The IS reportedly began destroying it today 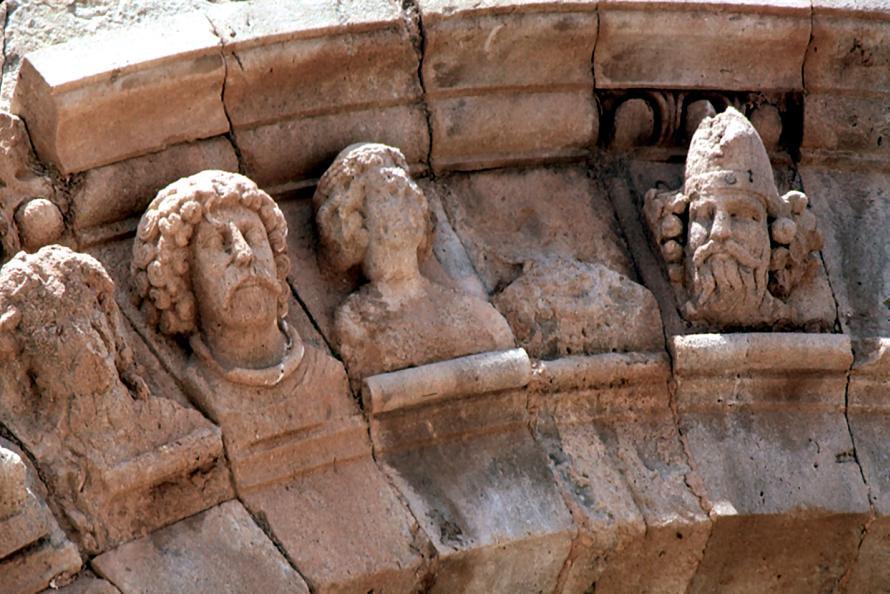 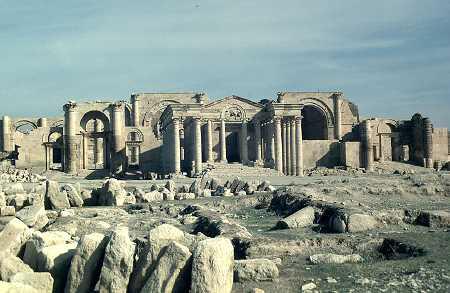 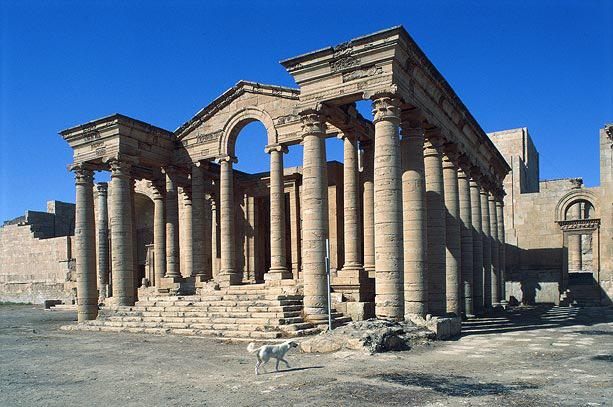 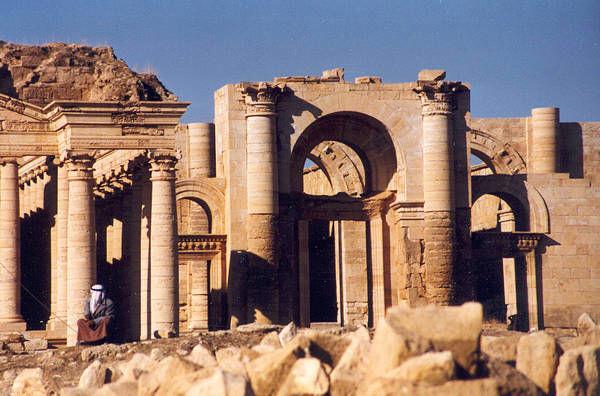