New Zealand prime minister John Key has told the Labor opposition to ‘get some guts’ and support his move to send troops to the Middle East. Key’s government has announced it will send soldiers to train Iraqi government forces to fight against Islamic State militants, although they will not go into combat themselves. Up to 143 New Zealand soldiers will join Australian forces there

revealed the Inspector General’s Office in the Ministry of Finance for him back more than 308 billion dinars to the state treasury in 2014 through a set of processes waste of public money.

The inspector general said the Ministry of Finance Maher Hussein Rashid “morning”: that the office succeeded in 2014 re 308 billion and 93 million dinars, noting that the most important concerns of the office to maintain public money and reduce waste operations in it.

indicating that these amounts were detected from several irregularities and was mostly in the tax, customs and banking sector through the implementation of fraud.

Total number of hits the news: 78

He called on the Kurdish blocs, beauty Panthers, to abide by the Convention of oil between Baghdad and Erbil.

The Panthers told all of Iraq [where], that “there are texts that have been agreed upon between the parties, Avredt the region send 250 000 barrels of existing wells in Kurdistan and 300 000 barrels of Kirkuk province, as well as the imposition of an agreement on the federal government’s commitment to Send 17 percent of the federal budget to Arbil. “

It is said that a delegation from the region, headed by the Prime Minister of the Kurdistan Barzani, has paid a visit to Baghdad by the activation of the oil agreement signed between Baghdad and Erbil late last year, but the negotiations did not produce any result.

And strengthened the opinion of the lack of agreement to what he said Barzani after the talks that took place in two rounds with Baghdad “that Iraq is going through a severe financial crisis, was the reason for not being able to send the region’s share of the financial budget,” adding, “We have agreed with the bankrupt state,” reiterated the commitment of the Government of the region’s oil agreement between Erbil and Baghdad.

However, head of the provincial government, saying that “the implementation of the agreement will require the commitment of the parties, and if Baghdad did not send the share of Kurdistan, the region also will not export oil for the benefit of the Iraqi government,” pointing to “a proposal for Baghdad to send $ 300 million just out of the billion dollars a share of the province of the federal budget, because it is now able to deliver 1.2 trillion dinars accrued to the region “.anthy 2

The Iraqi Ministry of Defense managed to purge the army from most parts of the town of al-Baghdadi, in Anbar province west of the country of the “Islamic state.” The ministry said in a statement that the strength of the Iraqi army, represented by the “leadership of the island’s operations and the desert” and the seventh Infantry Division and the attribution of tribal fighters and the popular crowd managed to free most of the areas of the town as well as the delivery of supplies and lifting the siege on the neighborhood of al-Baghdadi. The statement stressed the killing of a number of terrorists and destroying their vehicles and direct campaign sweep and wipe the security of the region in preparation for the return of the people of the town. Kurdistan Alliance announced that he put within Hsapth the possibility of withdrawal from the political process as a whole, or at least suspend his participation in the Council of Representatives that Baghdad has not fulfilled its obligations.

Alliance MP, Aravat Karam, that ‘He said a number of options are on the table meeting, including the withdrawal of our ministers and our representatives if the federal government continued not to pay the share of private territory, the budget of 2015 granted the right of either party to withdraw from the agreements concluded between them in the event of the other party violated his which is invoked by the federal government in the region not delivered dues during the last month amounting to one trillion and 200 billion dinars for it had received 200 000 barrels per day, contrary to what was agreed to be the sum of what it receives from Kurdistan and Kirkuk wells 550 000 barrels’.

Baghdad (AIN) –The Foreign Minister, Ibrahim al-Jaafary, stated in a press conference with his Iranian Counterpart, Jawad Dharif, stated that there are no evidences over the involvement of the US-led Coalition in dropping aids and weapons to ISIL. /End/

Search Finance Minister Hoshyar Zebari on February 23, 2014, with a number of senior government officials, parliamentarians, directors of banks ways to finance the budget deficit and the ministry plans to implement the budget law after its publication in the Official Gazette of the Republic of Iraq (Iraqi Gazette).

The meeting was attended by the Minister of Planning and the central bank governor and directors of banks, Rafidain and Rasheed and the Iraqi Trade Bank, Mr. Chairman and members of the Finance Committee in the House of Representatives and the President of the advisory board of the Council of Ministers.

During the meeting, they discussed the financial liquidity crisis and rationalization of expenditure and ways to finance the fiscal deficit and the completion of obtaining loans from banks and procedures.

During the meeting, and after discussions distinct crystallize a number of ideas and proposals for the future provision and maintenance of financial liquidity to meet the basic needs of citizens, and to support the military and security effort to counter terrorism.

Security forces have reportedly cleared “most” of al-Baghdadi sub-district and are preparing operations in Salah ad-Din to recapture Tikrit. In al-Baghdadi, the siege of the residential complex at the center of the sub-district was broken and the police station was recaptured although there remain attempts by ISIS to target security forces in the area. Tikrit will pose a greater challenge, requiring the coordination of security forces, tribal fighters, and Iraqi Shi’a militias in an operation that also aims to clear a number of smaller towns surrounding Tikrit. The clearing of Tikrit may be an indicator of security force performance for a possible upcoming operation to re-take Mosul. Tikrit is likely to be a source of heavy resistance, along with booby-traps that will make any capture of the area painstakingly slow work. Finally, the concentration of security forces in al-Baghdadi and Tikrit may also expose other parts of Iraq to attacks by ISIS. 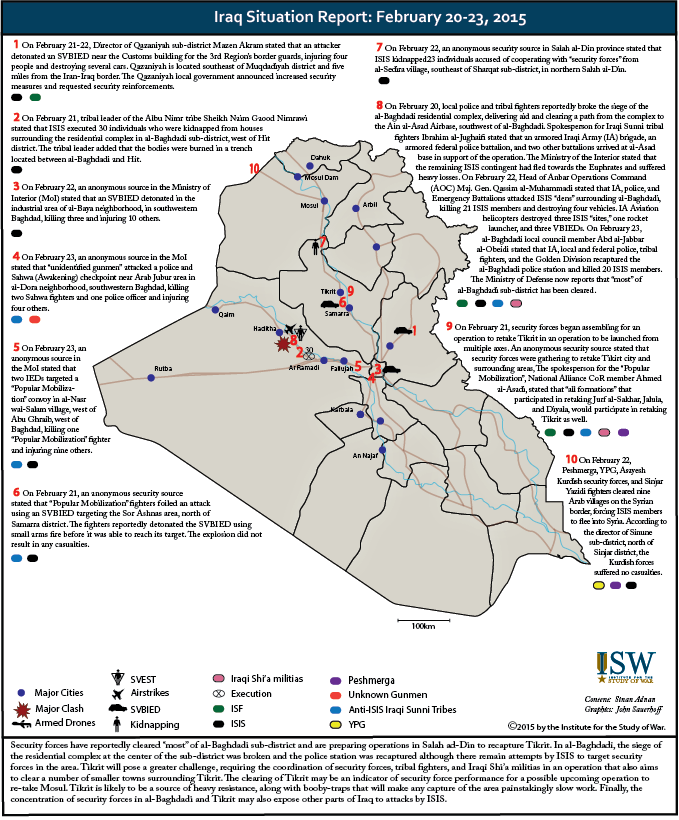 Read this update online
ISW will continue to provide updates on the situation in Iraq as it unfolds. For continuous updates, visit iswiraq.blogspot.com.