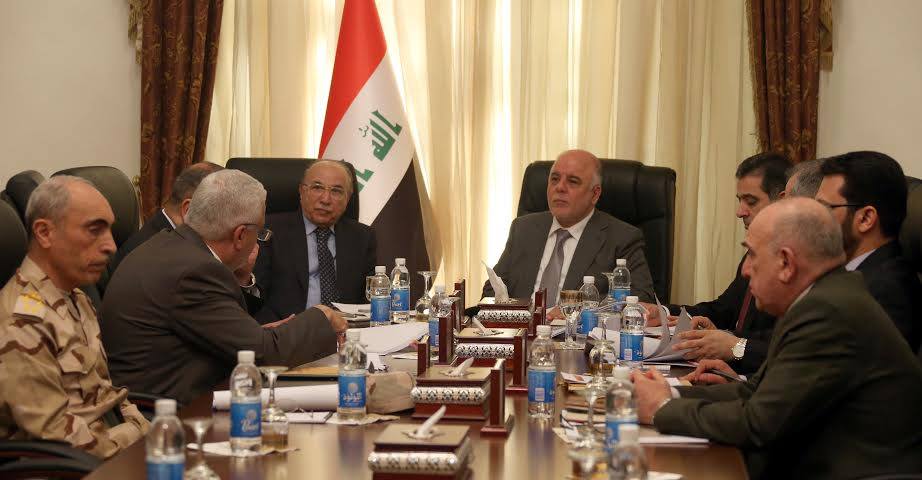 Stressed Prime Minister Haider al-Abadi, Sunday, that the delay of ten days the employees’ salaries is one of the proposals to address the lack of financial liquidity, and as pointed out it is not needed now, detect decline in imports significantly over the past two months and the current.

Ebadi said during a meeting with a number of representatives and directors of Iraqi satellite channels and followed up for News Agency (et) that “the rumor, which was launched on delayed payment of salaries ten days is one of the proposals and ideas in case we run into the low liquidity problem,” stressing saying “we do not need now To implement this proposal, but we might need him, and this depends on the nature of oil prices and revenues. ”

He said al-Abadi, that “during the months of January and February of this year, imports dropped dramatically as each year due to the weather,” pointing out that “the crisis that we face now are not making Iraqis but relate to the global economy.

Sunday, 22 February 2015 23:40
Baghdad (AIN) –The Iraqi Prime Minister Haider al-Abadi supported the suggestion over investigating his Deputy Salih al-Mutleg, also the chairman of the committee for relieving and housing displaced families, who faces accusations of corruption in spending the funds allocated for the immigrants and displaced persons.” /End/

This came during a meeting with Iraqi Defense Minister Khaled al-Obeidi, where the two sides reviewed during the meeting (what we have reached Daash terrorist organizations from landslides moral and material), according to a statement issued by the Iraqi Ministry of Defense.

The statement quoted Gen. Austin saying (as yet been killed 8500 Daasha through the air campaign), and confirmed that the (United States armies and alliance aimed at two points, the first help Iraq prevent the advance of terrorist organizations), and the second (to give an opportunity for Iraqi forces to prove the merit and the ability to defeat terrorism).

He stressed that the Austin (this work needs to be a great support for Iraq in terms of arming and training), according to the statement.

This meeting was attended by the US ambassador in Baghdad Steward Jones and the chief of staff of the Iraqi Army Gen. Babacar Zebari and a number of military leaders from both sides.

Baghdad (AIN) –The Iraqi Prime Minister Haider al-Abadi criticized appointing a large number of advisors describing this procedure as a means for earning livings rather than making benefit from the experience of the advisers.”

He added during a meeting with representatives of satellite channels in Iraq on Sunday “Funds allocated for the Special degrees in the Iraqi State do not exceed $ 100 million which represents 1% of the Iraqi federal budget.” /End/

And Abadi al-Maliki of the most prominent leaders of the Dawa Party, which ruled Iraq for years, and there was talk about the occurrence of differences between the two parties, especially after stripping Maliki of his desire to head the third term of government.

And received al-Maliki to his eight-year period to support the Iranian Amraki- clear, but that has not yet been relentless attack of terrorists Daash lands of Syria and Iraq continue to turn the support to his colleague in the party Abadi and enhances support Gulf.

According to the statement, he discussed the government’s curriculum and completed it and the laws that should be accomplished within the political agreement between the blocks, as well as discuss the security situation and the progress of military operations to counter terrorist organization Daash.

Iraqi Central Bank announced that as of today and Sunday, will stop work ERA Bank and the adoption of the banking system as being responsible for foreign remittances.

Noting that it “is not true that the central stays busy selling the currency like ATM daily.” Observers believe the movement of the market that this move will increase the low value of the Iraqi dinar, which is witnessing a continuous decline in nearly two weeks.

{Karbala: Euphrates News} Services Committee in the House of Karbala member of the leftist Hussein said that the local government has completed preparations for the implementation of the resolution adopting the collection system.

He said the leftist told Euphrates News} {today that “the adoption of the collection system that would impose fees levied on the owners of quarries and generators civil and public squares and trucks coming to Karbala.”
He added that the local administration informed the Council that the completion of all the necessary preparations for the formation of committees and the creation of requirements, while not specify a timetable for the start of implementation of resolution, Madf provincial council to move seriously to know the reasons for the delayed implementation of the imposition of tax voted by the earlier or a formal letter to the province so in case the reasonable period to respond to it. Over 22 h

Default Re: Abadi receives an invitation from Obama to visit the United States and confirms improved international support for Iraq

[Baghdad – where]
received Prime Minister Haider al-Abadi, on Sunday, an official invitation from US President Barack Obama to visit the United States, as he emphasized that international support for Iraq has improved over the past few days.

Ebadi said office said in a statement received by all of Iraq [where] a copy of it, “the Prime Minister Haider al-Abadi, received in his office today, the Central Command of US forces commander Gen. Lloyd Austin and his accompanying delegation in the presence of the US ambassador in Iraq,

Stuart Jones and Ambassador Brett Mkourk “noting that” the US ambassador to convey the invitation of US President Barack Obama to Haider al-Abadi to visit America, and the prime minister promised to meeting them at the appropriate time. ”

The statement quoted Abadi as saying that “Iraq fighting a fierce war against al Daash terrorist who used all the methods to terrorize the citizens, which requires more support for Iraq in its war against terrorism,” pointing out that “the international support for Iraq has improved over the past few days and hopefully more to get rid of Daash organization. ”

He added that “there is progress in the rally and recruit people of the provinces of Nineveh, Anbar and Salahuddin to release it from terrorist gangs,” noting that “the sons of those provinces cooperate with the security forces will increase the pace of the victories achieved, and contribute to the liberalization of the cities and the expulsion of the enemy as quickly as possible.”

The statement also quoted Gen. Austin said, “The security situation is better than it was six months ago, because there is a security progress in the fight against terrorist organizations,” he “continued US support for Iraq in its war against al Daash terrorist.”