The US president called on the leaders and governments of the world to move vigorously to repel the ideology of extremism and violence adopted by the Islamist groups, stressing that the war, which they claim that the West waged on the Islamic religion is only “an ugly lie.” He said in his speech to the closing session of the summit of the fight against extremism and violence hosted by Washington, said that “terrorists” are taking advantage of minds incomplete maturity to impose hate speech, stressing the need to refute the idea deviant, argument that there is a war between the West and Islam.

“The response to these ideologies requires action on several axes, most notably the elimination of sectarian conflict in the region and the consolidation of the principles of democracy and the fight against poverty and unemployment in the Muslim world.” He said the US president, that “the sectarian conflict in Iraq and Syria, paved the way for the organization of the Islamic state Daash, and form factor magnet for terrorism. ” Obama urged the international community to deal with the social issues that may be the cause of the spread of extremism and violence, including poverty, unemployment, illiteracy, corruption and other manifestations that contributed to the stability of societies. In this regard, pledged aid to needy countries, to encourage young people to take advantage of the new opportunities for education, especially women. He called on developing countries to work on providing a transparent environment for political action, a fourth step to counter extremism, and the elimination of political reasons taken by those pretext groups to do their work, which, including the respect for democratic transition and peaceful freedoms.

The records come from time Baghdadi spent in US Army custody in Iraq. They were released through a Freedom of Information Act request. In these files, Baghdadi was identified by his birth name, Ibrahim Awad Ibrahim Al Badry.

There have been conflicting reports about the time Baghdadi spent as a US detainee. These files identify his “capture date” as Feb. 4, 2004 and the date of his “release in place” as Dec. 8, 2004. According to the records, Baghdadi was captured in Fallujah and held at multiple prison facilities including Camp Bucca and Camp Adder.

Business InsiderA photo of Abu Bakr al-Baghdadi from U.S. Army files relating to his time as a detainee in Iraq.

In the book “ISIS: Inside The Army of Terror,” Michael Weiss and Hassan Hassan relay an account of Baghdadi’s capture from ISIS expert Dr. Hisham al-Hashimi. In the interview, al-Hashimi said Baghdadi was captured by US military intelligence while visiting a friend in Fallujah named Nessayif Numan Nessayif.”Baghdadi was not the target — it was Nessayif,” said al-Hashimi, who consults with the Iraqi government and claims to have met the ISIS leader in the 1990s.

Baghdadi’s detainee I.D. card lists him as a “civilian detainee,” which means he was not a member of a foreign armed force or militia, but was still held for security reasons. His “civilian occupation” was identified as “ADMINISTRATIVE WORK (SECRETARY).” As of 2014, he was listed as being 43 years old though his birth date was redacted. Baghdadi’s birthplace was identified as Fallujah.

These records also provide some details about Baghdadi’s family. His file identifies him as married and his next of kin was an uncle. The names of his family members were redacted from the records.

View the Baghdadi files below. According to Army Corrections Command, some of the records requested by Business Insider remain classified. We are working to obtain all possible files from Baghdadi’s detention.

A senior US military official said that the fight for the restoration of the Iraqi city of Mosul from the grip of the organization of the Islamic state will begin in April / April or May / May next year, and will involve 12 Iraqi brigade, which is between 20 thousand to 30 thousand fighters from the government forces and the Peshmerga .

The official said, in the Central Command of the US Army, said that five brigades will begin to receive training at the hands of coalition forces in Iraq.

And exposed the organization of the Islamic State of months of intensive air strikes by the international coalition led by the United States aimed to weaken and end the presence of the organization since the aircraft.

And participate in the Alliance dozens of countries, including Saudi Arabia, Bahrain, Qatar, and the UAE, which had suspended its participation after the overthrow of the Jordanian plane pilot forbid Kasasbeh and kill him, then raids resumed afterwards.

The official added that there are between a thousand and two thousand armed followers to organize an Islamic state in the northern city of Mosul.

The organization took over the city in the month of June last.

Has been raising the issue of the restoration of the city among the military commanders in the recent period.

And could be delayed implementation process in the event of Iraqi forces were not ready until April / May or May, according to the military official.

The Iraqi Prime Minister Haider al-Abadi, said in an interview with the BBC on Monday that Iraqi forces are planning an attack on Mosul in the next few months.

But Abadi did not specify the exact date for launching the attack, and expressed the hope that it will be before the end of the year.

He said the timing of the attack depends on the “situation on the ground,” and the “Astaadadana.”

He explained that the operation’s success will also depend on close coordination between the Iraqi security forces and US military forces and the peshmerga.

BAGHDAD, Feb 19, (KUNA): Iraq’s Foreign Minister Ibrahim Al- Jaafari met at his office with Kuwait’s Ambassador to Iraq Ghassan Al- Zawawi on Wednesday. During the meeting, the two sides discussed ways to bolster bilateral relations as well as practical measures to implement the agreements between the two countries, including reopening of a Kuwaiti consulate in the city of Basra, Kuwait Embassy said in a statement.

Al-Jaafari said that Iraqi- Kuwaiti ties are notably improving, especially after signing several MoUs between the two countries in various fields, the statement noted, adding that the Iraqi Minister has also affirmed his country’s ambition to boost ties with all world countries. He also called on bureaus and committees to implement signed agreements between Iraq and Kuwait in order to expand joint cooperation and support investment and trade exchange for the benefit of the two countries and people.

Meanwhile, Ambassador Al- Zawawi expressed Kuwait’s seriousness in bolstering relations with Iraq, noting that he is to exert his efforts for implementation of Kuwaiti-Iraqi signed agreements. During his visit to Basra in 2013, Al-Zawawi made an announcement that Kuwait is to reopen its consulate in the Iraqi city, of which the Iraqi government highly welcomed as it would contribute in boosting economic cooperation between the two countries

Brother – Baghdad
denied for security and defense committee in Parliament, on Thursday, the arrival of troops from the US Marines to Iraq to fight al “Daash”, as pointed out that Prime Minister Haider al-Abadi assured them during the past few days that there are no foreign troops in the country.

He said committee member MP Abbas Alkhozai in a press statement that “the news of the existence or the arrival of US combat ground forces or from other countries to Iraq is not true,” adding that “some military bases where military advisers and this is known to all.”

He added Alkhozai, that “three presidencies refusing to enter any troops to Iraq, “pointing out that” the Committee met four days ago with the general commander of the armed forces, Prime Minister Haider al-Abadi, and denied the existence of any foreign troops on the ground. ”

The means of Arab media confirmed on Thursday that the actual preparations on the ground in Iraq began preparation to “liberate Mosul” organized “Daash”,

revealing the arrival of troops from the US Naval Infantry “Marines” are already in the country to participate in the wild battle.

Follow-Iraq Press -19 February: The re-opening of the Australian Security Intelligence Agency station in Iraq after it was covering the country from neighboring countries, according to Australian reports said.

The newspaper said that a Awstralaan Australian spy agency increased the size of its elements in the Middle East re-opened its station deactivated for Iraq, as well as increase the number of officers working in Jordan, Turkey and Lebanon.

The move came on the part of the CIA secret Australian part of the “focus” historic new to the Middle East by the intelligence and international police agencies, in an effort consistent with the threat posed by the organization of the so-called “Islamic state” and “his army of foreign fighters”, who holds many of them Australian nationalities, according to the Australian newspaper said on Wednesday.

The newspaper said that at a time when this terrorist organization expanded the campaign from Syria into Iraq, the Australian Federal Police and a domestic spying and told the Australian intelligence has moved to increase the number of association officers, who put them in the head of the countries, such as Turkey, Lebanon and Jordan, which is considered one of the best Regional sources of intelligence on the situation in Syria.

In the past year, the Australian Federal Police and put a link in Turkey officer, which is the gateway to the theater of war in Syria, has also strengthened its presence in Lebanon and Alerdn.anthy (1)

Dr Thikra Mohammed Aloush, Newly appointed Mayor of Baghdad is FIRST female to to be the Iraqi capital’s mayor #Iraq 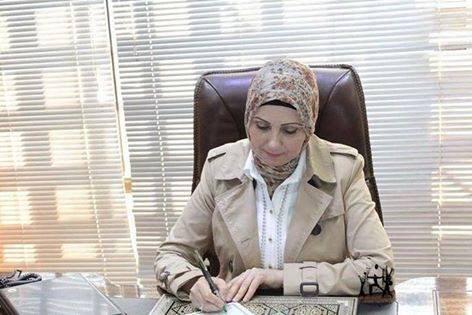 Baghdad (AIN) –The Prime Minister, Haider al-Abadi, announced that “The Government is willing to ensure the rights of the workers of private sector through the Pension Law. /End/

Emphasized the World Bank director in the Middle East and North Africa region unique Belhadj, on Thursday, the bank’s keenness to rehabilitate the companies in Iraq, and to support projects in infrastructure such as electricity and water, as he pointed to the presence of existing projects currently as a power in Hartha and project water tanks in Baghdad.
The Prime Minister said Haider al-Abadi’s office said in a statement the agency / information /, received a copy of it, “the latter discussed with the Director of the World Bank in the Middle East and North Africa region unique Belhadj and the Special Representative of the Mission of the World Bank in Iraq, Mr. Robert quality PU, the challenges faced by the Iraqi economy due to lower global oil prices and discussed the restructuring of the Iraqi economy and the rehabilitation and support of the government to the private sector and transform the challenges faced by Iraq to the chances of real and effective reform as well as follow-up resulted in a meeting Abadi with the World Bank director on the sidelines of the Davos World Economic Forum last month. “
He emphasized the World Bank delegation, according to the statement, “the bank’s keenness and determination to provide all assistance to Iraq and his willingness to help create programs and projects to revitalize the government banks, and cooperation with the Central Bank of Iraq, and rehabilitation of state-owned enterprises, as well as supporting projects in infrastructure such as electricity, water and other pointing to the existence of projects A current project of electricity in Hartha project and water tanks in Baghdad, “.anthy / 25