Follow-up / newspaper integrity – made a judge, Rahim Ugaili, head of the National Center for Legal and Judicial Studies complaint against former Prime Minister Nuri al-Maliki, demanding the trial of what has committed against the Iraqi people.

A Gesathat complaint filed by Ugaili to the Iraqi judiciary that “Nuri Kamal al-Maliki, who has served as the Prime Minister and Commander of the Armed Forces in Iraq between 2006 – 2014 has been committed during his rule a number of violations,” stressing that “the charges against the Commander in Chief Armed Forces of the military jurisdiction because he is a civilian position and specializes in internal security forces and military courts have committed the offenses for which the military exclusively. ”

The student Ugaili in his complaint to (take legal action and moving the criminal cases against al-Maliki of breaches, including the fall of one-third of Iraq, however Daash), and is caused by the arming of the organization mechanics and sophisticated weapons the Iraqi army estimated value (more than fifteen billion dollars), which left the army behind him while abandoning the defense of the land in the affected provinces and the resultant of the killed and wounded, and the displacement and the displacement of millions of citizens and the violation of their right to life, honor and property, and the captivity of women and sold in the slave markets Aldaashah. ”

He pointed out that “the second violation represent Besbaeker where implicated thousands of young people is the coach predestined for electoral purposes and pay them to the camp in Salah al-Din and leave them there without training or weapons with which to defend themselves and without military justification for being there made them catch a easy to a terrorist organization killed all ugliest crime in the modern history of Iraq.

As well as the targeting of hundreds of children, women and the demonstrators as he did in Zerga and Hawija and Fallujah and Ramadi, “stressing that” the evidence contained within the claims of the police, medical centers and departments of Justice Prosecutor for those areas.

He Ugaili in his complaint that “al-Maliki caused the tragedies suffered by minorities of Christians and Yezidis and failing to protect them and negligence in carrying out relief and provide minimum requirements for them and stressed that al-Maliki” spreading corruption in the military and security establishment through embezzlement systematic by aliens arrested commissions for armament contracts and Catering Army and internal security forces, and the sale of positions and ranks is owed, and took Alatwat separately in the appointment of military commanders without filtering their names to parliament for approval on them to ensure the removal of out of obedience to him at any time and established security and military institutions dirty forces have no basis not in the Constitution, nor -in-law in order to control and control and exclusivity rule and the militarization of society and the implementation of political agendas, such as the Commander in Chief of the armed forces and a counter-terrorism office, which wasted them hundreds of millions of dollars and contributed significantly to weaken the army and spreading corruption in it by taking Alatwat and sell positions and ranks is owed and the dissemination of corruption aliens in an orderly and systematic, and meditated in creating differences between the formations of the armed forces were fortifying its excesses and its violations of the legal and judicial accountability under the direct orders of the accused and to implicate the army in the political battles and use it against the people.

Proof army units deployed in the capital Baghdad and other Iraqi cities, which went against the Kurdistan region of Iraq, “he described.

Pointing out that “March work of emergency without the authorization of the House of Representatives, and management of the country crises, and overtaking on the property, public and private roads, cutting off roads and restrict the freedom of people to move and searched daily, and the practice of arbitrary arrests and violations of human rights, contrary to Article (61 / IX) of the Constitution, which organized the provisions of the declaration of a state of emergency .fima case and after the occupation of Daash connector, Salahuddin and Diyala, and the liquidation of prisoners and detainees sectarian order ambushes public streets to tell them after them out of prison under the pretext of being transferred and implementation of random arrests without warrants in a lot of the Iraqi provinces, such as an incident of mass arrests before the Arab Summit in Baghdad, and the arrest of more than three thousand men in his visit to the connector before the occupation in accordance with the approved one television of his meetings. ” Finished

Follow-up / newspaper righteousness _qal member of the parliamentary finance committee Masood Haider, said that his committee will add a Governor of the Central Bank and the agency relationship managers and bank Rafidain and Rasheed to discuss the draft law guarantee bank deposits, next week.

Haider said that “the parliamentary Finance has seven laws will be discussed by the most important guarantee of bank deposits,” noting that “the committee emanating from the banks of the Finance Committee will provide law in the next session for discussion.”

He stressed that “the Commission will begin legislation seven laws during the second legislative term,” noting that “priority will be the most important laws.” Ended 11 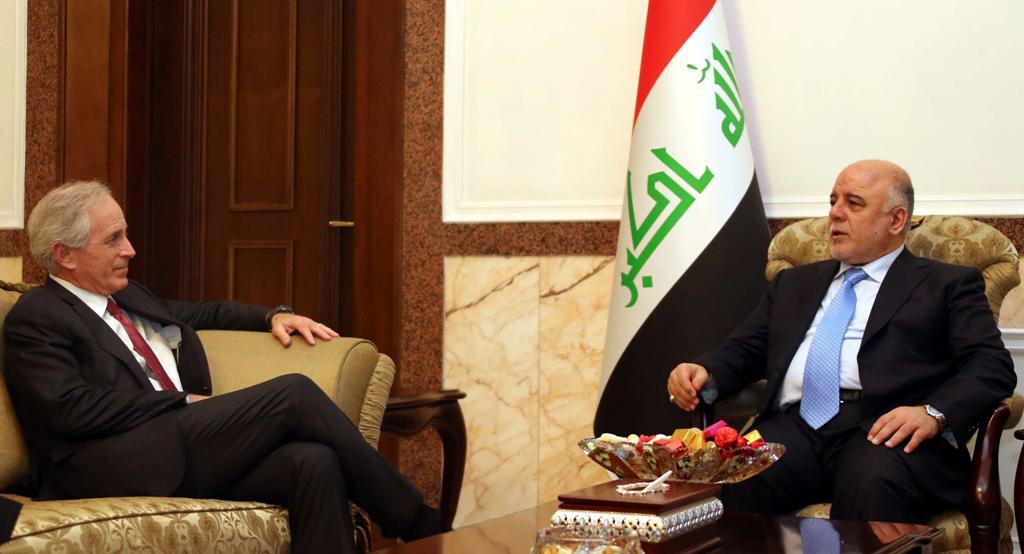 {Baghdad: Euphrates News} praised the three presidencies oil agreement between Baghdad and Erbil, and calls for a solution to the outstanding problems and to increase military cooperation to counter terrorist gangs Daash follows ..
http://translate.googleusercontent.com/translate_c?depth=1&hl=en&prev=search&rurl=translate.google.com&sl=ar&u=http://www.faceiraq.com/inews.php%3Fid%3D3533045&usg=ALkJrhg-pqQYNU9F0frjGQxsLEFyk_NfxQ

A President of the Republic, Dr. Fuad Masum, on Tuesday evening, a meeting with the heads of the House of Representatives, Salim al cabinet Haider al-Abadi, in the Peace Palace in the capital Baghdad.

During the meeting of the three presidencies, a comprehensive review of the overall political, security and economic developments in the country.

After the meeting, issued a statement in the text comes

Held at the Peace Palace Bbgad Tuesday evening 02/17/2015 three presidencies meeting in the presence of His Excellency the President of the Republic Fuad Masum, the rule of Prime Minister Haider al-Abadi, the rule of House Speaker Salim al-Jubouri and gentlemen, the Vice President and the Prime Minister and President of the House of Representatives, as the meeting was attended by Chairman of the Supreme Judicial Council Mr. Medhat al-Mahmoud.

It was at the meeting, a comprehensive review of the overall political, security and economic developments in the country with a heavy intake of verified in the political document and the program of work of the government during the last period, was to continue to emphasize the need to strengthen joint action and political compatibility and high sense of responsibility by all political parties in order to meet the challenges facing the the country’s various components.

The meeting paid tribute to the success of our fighters from the armed forces and the crowd, popular, and the Peshmerga forces clan in the face of terrorists and defeated in a lot of areas, the presidencies stressed the need to strengthen these victories and assigning the unity of the political situation and the joint work, with an emphasis on strengthening the sons of areas threatened by the efforts of terrorism to protect their areas of cooperation with the armed forces and the effort of military, security and intelligence state.

The participants confirmed the need to respect the authority and independence of the judiciary in accordance with the principles of the Constitution and the adoption of the resolution of issues as well as to show the results of investigations into crimes which affect the Iraqi people.

The meeting will also look positively to the agreement between the federal government and the Kurdistan Regional Government agreement regarding oil and Budget and the commitment of the two parties, and called to resolve outstanding through and increase and improve military cooperation in dealing with gangs Daash criminal and joint action for the relief of refugees and displaced positive dialogue problems.

The meeting was dominated atmosphere of full and positive interaction in the frankness of views, it was agreed to hold a meeting soon to follow up the implementation of what was agreed upon and complete the discussion of the pressing issues at all levels.

That way, you will not miss any News information that comes straight from Iraq and other news agencies.

Please also leave any comments that you would like to add to any articles of interest.

A warm thank you to all of our viewers and readers of Searching 4 Dinar.

For any articles to contribute or comments our email:

Iraqi Prime Minister Haider al-Abadi has told the BBC’s John Simpson that Iraq is making preparations to move against the Islamic State stronghold of Mosul.

He also said that when he took office five months ago, he was surprised at the lack of support from the US.

However, he said that has changed significantly in the last four weeks with ”an acceleration of support”.