Skip to content
Home2014December24
In search of the political process and the challenges faced by track
Infallible Jubouri affirm the need to speed up to pass laws that affect the lives of citizens
BAGHDAD / follow-up justice – 12/23/2014 – 0:12 | Hits: 29
According to a presidential release that “President Fuad Masum, received in his office yesterday, House Speaker Salim al-Jubouri, was discussed the political process and the most important obstacles and challenges they face, and the need to deepen the harmony of the positions taken by the political blocs and higher institutions of the state in order to keep up with the current stage on the road to defeat terrorism “.“The infallible and al-Jubouri, stressing the need to speed up the passage of laws that affect the daily lives of citizens directly, especially the ratification of the general budget of the state.” President of the Republic briefed al-Jubouri, according to the statement on the substance of his recent visits to neighboring countries, noting that these visits have contributed to strengthen Iraq’s position in the region. “The statement noted that” at the end of the meeting through the infallible president and Jubouri for their welcome victories achieved on the organization Daash terrorist in the number of areas, and the need to preserve these achievements and to work strenuously to purge the remaining ones.

Wishing our Christian brothers and sisters in Iraq and around the world a blessed Christmas and a prosperous New Year http://pmo.iq/pme/press/24-12-2014en.htm …

Speaker announced Saleem al-Jubouri, the “national dialogue conference held in Baghdad with the participation of all the political blocs and members of boards of Anbar, Diyala, Salahuddin, Kirkuk and Nineveh.”

Jubouri said that “the conference calls for the convergence of views between the politicians in order to overcome the obstacles that stand in front of the country,” declaring that “there is a desire of the President Fuad Masum, Prime Minister Haider al-Abadi to participate in the conference.”

He continued, “we are looking for to provide every effort to fight terrorism and to request international support,” pointing to “the formation of committees stemming from Erbil, which was held a few days ago, to work, each according to its competence Kalnazhan and armament through coordination with the relevant authorities Conference.”

.ouhaal Fears of government Barriers to hold a “Sunni forces” in Baghdad, reliable milkfish on the “positive attitudes to the Prime Minister Haider al-Abadi, and most of the parties to the National Coalition” conference, adding that “a small portion of the state law does not want the success of our conferences, but the majority stands on our side.”

The lights are on in Manger Sq, Bethlehem. It’s beginning to feel a lot like Christmas… 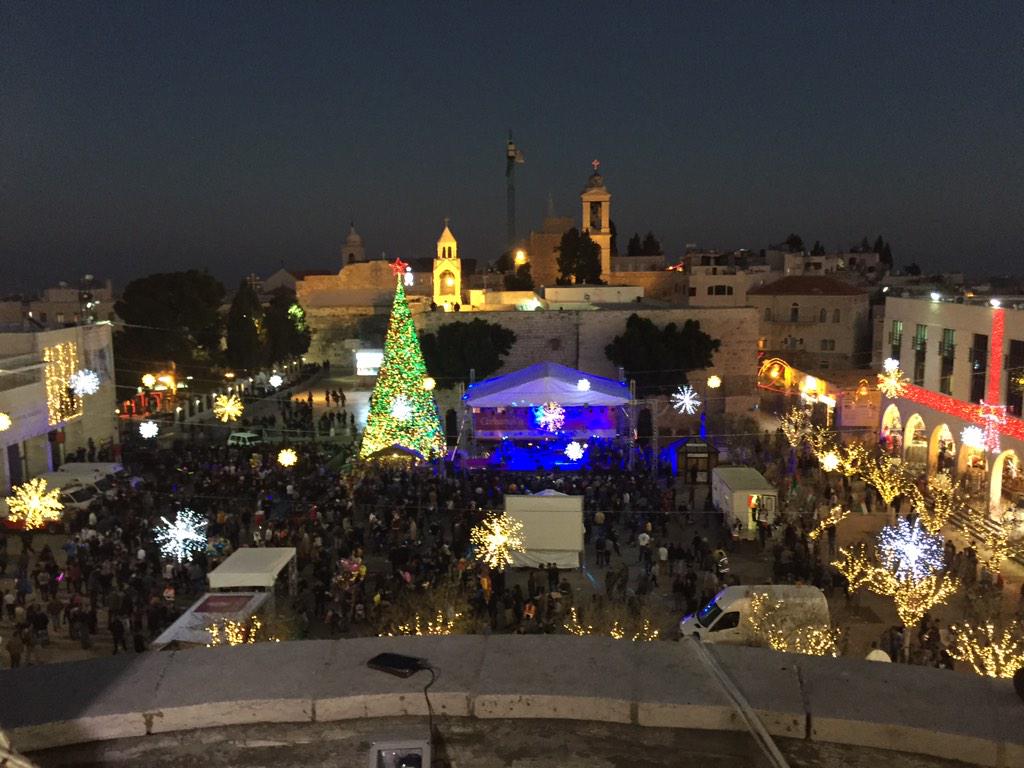 {Baghdad: Euphrates News} General Secretariat of the Council of Ministers announced that on Thursday Christians, especially on the occasion of the Christmas holiday.
A statement by the Secretariat and received by the agency {Euphrates News} copy of “on Thursday is a special holiday for Christians on the occasion of New Year’s holidays.” Ended k h
http://translate.googleusercontent.com/translate_c?depth=1&hl=en&prev=search&rurl=translate.google.com&sl=ar&u=http://www.faceiraq.com/inews.php%3Fid%3D3359676&usg=ALkJrhic9_sTcNBX2oo8MdxJeSbcdCkgOA

To mark the birthdays of Jesus Christ by the solutions of peace and New Year’s Day, we present Bazaky congratulations and best wishes to the brothers Christians of our people Karim In all the world to be a new year in security, stability and prosperity, and enjoy the Christians and all Iraqis, all the safety and freedom of their families and their compatriots. The celebrations this year comes in light of a decisive confrontation with the terrorists who have targeted Daash all the Iraqi people from different religions

And nationalities and creeds, has proved Christians in this confrontation, which is not limited to Iraq alone, they are the sons of loyal and counties of this country, in spite of their abuse and displacement by the criminal terrorist gangs that target the dismantling of the social fabric and hit the peaceful co-existence in the land of Mesopotamia, which has civilization on religious pluralism and diversity of intellectual and cultural history. While we affirm our pride and extreme keen to Christian brothers and partners real survival in building Iraq, Naahidhm to exert utmost efforts and capabilities to achieve this goal and disinfection of all the cities of Iraq and re-displaced and displaced people to their homes in grace and dignity and the protection of rights and freedoms according to the constitution, and emphasize on this occasion that Daash criminal gangs offended Islam and Muslims and tarnished the principles of our religion based on love, tolerance and compassion. We renew our brothers Christians congratulations and all the sons of the Iraqi people Karim. Every year, you are fine. Dr. Haider Abadi, head of the Council of Ministers

After more than 100 days of the government of Prime Minister Omar Haider al-Abadi, deputies from different political blocs felt that it made many achievements in the files related to corruption and security, unlike his predecessor, Nuri al-Maliki, who has seen the country during his eight years amounting to a lot of crises.

She was an MP for the Kurdistan Alliance Shirin Mohammad Reza, optimistic severe government Abadi said, “has several important steps, where he managed to eliminate corruption and open aliens file and committed to a settlement between the province and Baghdad, trying to address all outstanding issues between them.”

Mohammed explained that “Stretch organization Daash Say in the reign of al-Abadi, through the victories achieved by the Peshmerga and the international coalition aircraft with the participation of the Iraqi army in the Sinjar district and other areas,” arguing that “Maliki is provided fertile soil for extended Daash in Iraq.”

She noted that the low budget back to the former Prime Minister Nuri al-Maliki, who wreaked havoc in Iraq. ”

She said, “We do not want to pay tax corruption Maliki and plundering of Iraq’s money, must be prosecuted and the freezing of his assets.”

Muhammad felt that Abadi not stepping steps al-Maliki of any hand, Valebadi open to everyone from the Sunnis and the Kurds, Shiites and managed to strengthen relations with regional and Western countries to restore relations with foreign and defeat extremist organizations.

And the assumption of al-Abadi, who was vice chairman of the House of Representatives in the current session, as prime minister in September last September, the successor to the leader of the coalition of state law, Nuri al-Maliki, who was chosen to be vice president.

The Oil Ministry announced, Wednesday, all achieved a significant oil discovery in the area ninth expedition, noting that the production rates which ranged between 5,000 and 8,000 barrels per day.

He said ministry spokesman Assem Jihad said in a statement that “a consortium of Kuwait Energy Kuwait and UAE’s Drakoun Oil was able to achieve this great discovery in the area in the ninth exploratory installation and dove to a depth of 4,000 meters in the well Faiha (1).”

Jihad said that “tests conducted on the detected configuration proved that production rates which range between (5000 – 8000) barrels per day,” he said, adding that “the coalition had previously made an oil discovery is another important in the formation of the supervisor in the well Faiha (1) within the same area exploratory. ”

Jihad explained that “these Alakchavean Sbivan significantly increase the total production of oil fields,” pointing out that “the Coalition will conduct further drilling and evaluation of the development of this oil field.”