Baghdad: «Middle East»
Iraqi parliament speaker Salim al-Jubouri, yesterday called for parliament to convene tomorrow to discuss the federal public budget for Iraq project for 2015.
The Iraqi government has ratified yesterday in its draft budget law for 2015, said Finance Minister Hoshyar Zebari said the Cabinet approved the draft budget for 2015 worth 123 trillion dinars ($ 103 billion). He told «Reuters» that the draft budget is expected deficit of 23 trillion dinars ($ 19 billion). The government in the budget assumes that the price of oil to $ 60 a barrel, given that oil prices fell to $ 55 a barrel, almost half since June last year. Zebari said the budget will be presented to Parliament soon after it seized drafting committee comprising Zebari led by Prime Minister Haider al-Abadi. It is expected that the Committee will meet today and then refer the draft budget to Parliament after that.
On the other hand, sources from the oil sector and data Shipping said that Iraqi oil exports rose this month, heading towards record levels, with increased production of the country. Shipping data showed for the first 23 days of December (December) monitored «Reuters» agency that exports from the ports of southern Iraq amounted to no less than 6.2 million barrels per day on average. He gave two sources in the sector exports watching similar estimates. A source in the sector noted high flows south to 8.2 million barrels per day in a part of the month «look like this very large quantities .. huge amounts».
Moreover resumed Kirkuk crude flows from the Turkish port of Ceyhan in December after Baghdad reached an agreement with the Kurdistan Regional Government.
http://translate.googleusercontent.com/translate_c?depth=1&hl=en&prev=search&rurl=translate.google.com&sandbox=0&sl=ar&u=http://www.faceiraq.com/inews.php%3Fid%3D3357766&usg=ALkJrhgTOPodtYcDw-iJAR5h2pIOEyUW1Q

Saudi Arabia’s oil minister, Ali al-Naimi, has said oil producers’ cartel Opec will not cut production even if the price falls to $20 a barrel.

In November, Opec [Organization of the Petroleum Exporting Countries] said it would keep its target output at 30 million barrels per day.

The Brent crude oil price has fallen by more than 46% since its $116 June peak.

Speaking to the Middle East Economic Survey, Mr al-Naimi said: “As a policy for Opec – and I convinced Opec of this, even Mr al-Badri [Opec secretary general] is now convinced – it is not in the interest of Opec producers to cut their production, whatever the price is.

The world might not see the oil price back at $100 a barrel again, he added.

While alternative sources of crude oil, such as shale and tar sands, have caused a big increase in supply, some analysts argue that the oil price collapse is more to do with falling demand due to a slowing global economy.

Danny Gabay of Fathom Financial Consulting told the BBC that the oil price fall was “overwhelmingly, predominantly, if not entirely, a demand shock. It’s China slowing down. The supply element is more of a reaction.”

International Monetary Fund (IMF) economists have speculated that the low oil price could boost the global economy by up to 0.7% in 2015.

“Overall, we see this as a shot in the arm for the global economy,” said Olivier Blanchard, the IMF’s chief economist.

Similarly, Opec producers believe the oil price could return to about $70 or $80 by the end of 2015 as global economic recovery boosts demand.

It was an honor to visit the mother who lost three sons in the fight against terrorists, in Zummar. 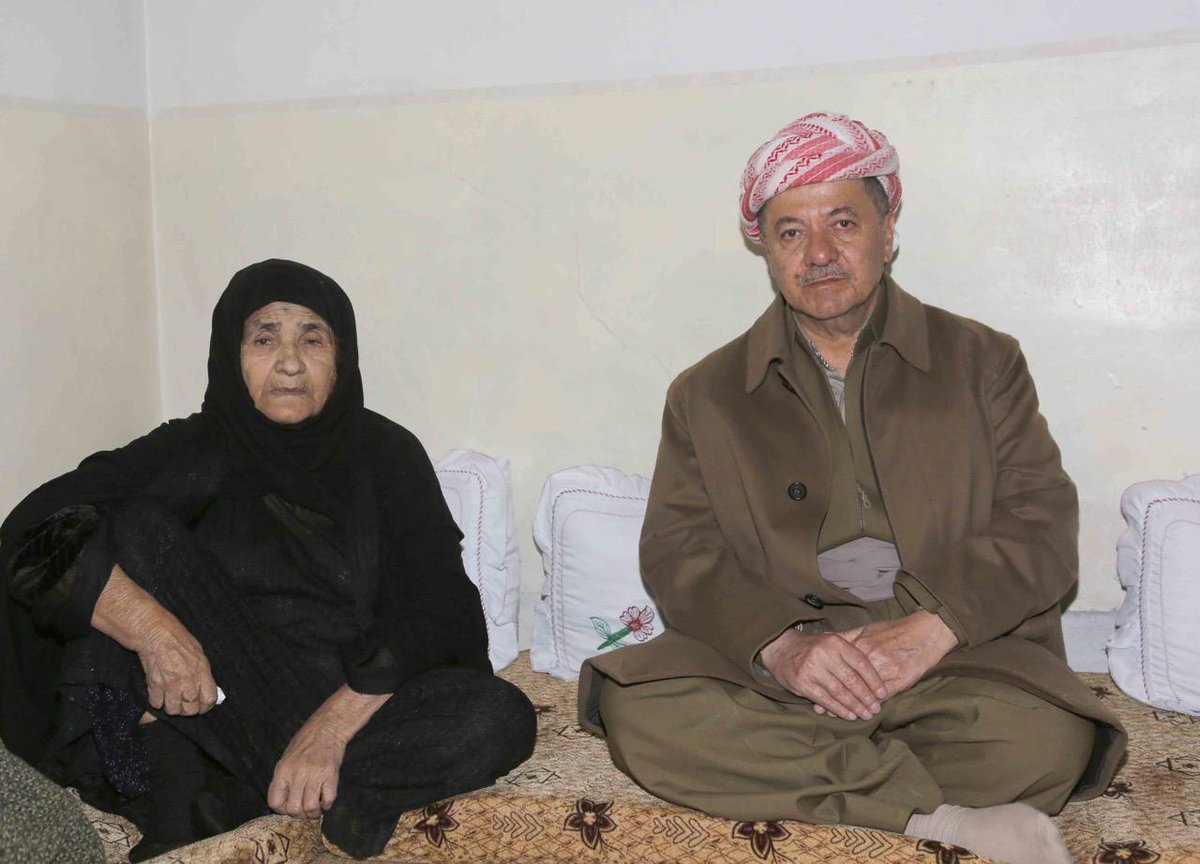 Information Office of the Prime Minister Haider al-Abadi, announced on Tuesday, the Cabinet approved the federal budget for 2015 to 123 trillion dinars, pointing out that the speculative price of oil was about $ 60 a barrel.

Saad al-Sabri, a spokesman for the Information Office in an interview with the (long-Presse), “The Council of Ministers voted on the draft 2015 budget law, and that the amount of 123 trillion Iraqi dinars, according to the price of speculative oil at about $ 60 a barrel.”

Sabri said that “the draft budget will be sent through legal channels to Parliament, and as we know that the Parliament on holiday now, “likely” to take place after about eight days. ”

He predicted Hoshyar Zebari, Minister of Finance, on Tuesday, a deficit of 23 trillion Iraqi dinars in the budget of 2015, approved by the Council of Ministers, among the budget will be presented to Parliament soon after it seized drafting committee led by the Prime Minister.

Zebari said in an interview (Reuters) and I followed (range Press), “The Council of Ministers approved the draft 2015 budget worth 123 trillion dinars,” expected to “see that the budget deficit of $ 23 trillion dinars.”

Zebari said that “the budget will be presented to Parliament soon after he set the drafting committee led by Prime Minister Haider al-Abadi,” expected to “meet tomorrow and then refer the draft budget, then to Parliament.” .

The Parliamentary Finance Committee has been revealed in 14 of the current month for government efforts to address the budget deficit because of falling global oil prices through a series of austerity measures that would provide at least $ 13 billion,

the Commission predicted that the government resorted to dispose of 50 percent of bank reserves Rafidain and Rasheed, as well as borrowing from the balance of the commercial bank and fund minors,

also suggested that includes austerity “luxury expenses sovereign” which said it accounts for 10 percent of the country’s budget.

will be based on the 2014 current budget, due to the presence of the same problems, of oil from Kirkuk and stopped completely, as well as lower global oil prices, and expectations about to fall over, for this, the Council of Ministers decided to austerity.

for the arrival of the financial budget law next to 2015, to the parliament, “noting that” the call came on the basis of Article 58 of the Constitution.

” Ihsanoglu said that “al-Jubouri, select the 11th time on Thursday, for the meeting.”

Information / Arbil / ..
The head of the Kurdistan Regional Government Nechirvan Barzani, on Tuesday, the difficulty of protecting the population of the Nineveh Plain area in the event of non-implementation of military operations inside the city of Mosul in Nineveh province, as he pointed to the existence of a remarkable development in the relations between Baghdad and Erbil after the advent of the new government headed by Haider al-Abadi.
Barzani said during a joint press conference with Italian Foreign Minister Paulo Jantelaun held today, in Erbil and attended / information /, that “if there is no implementation of military operations in Mosul, it is difficult to protect the people of Nineveh Plain area.”
Barzani said that, “After the advent of the new government in Baghdad, headed by Abadi witnessed a remarkable development of relations between Baghdad and Erbil.”
It is noteworthy that Italian Foreign Minister Paulo Jantelaun arrived Tuesday evening (23 December 2014), to the city of Erbil after his visit to the capital, Baghdad, and met upon arrival KRG President Barzani. Finished / 25 u

Mr. Salim al-Jubouri, head of the House of Representatives calling for the ladies and gentlemen of Representatives to attend a special meeting on Thursday, December 25, 2014 regarding Alathadbh budget for 2015, after the arrival of the Council and on the basis of Article 58 of the Constitution first.

Zebari said in a press statement “really are faced with a situation financially and economically difficult,” he said, “the strategy was to offer a real budget and arrange budget in accordance with the actual revenues so that we can fulfill our priorities Home.”

And between Zebari said that “those priorities is to defend, fuel, electricity and displaced people in Iraq, where it has more than two million people lost their homes in the last year and these people need to return to their homes and to basic services, and reconstruction and security.”

Finance Minister pointed out “that there was no specific figure yet on actual spending in 2014 but is expected to be higher than the amount of the draft budget of 2015”.

“The economy received a major Sdmtin in 2014 are growing organization Daash and loss of Agriculture and displacement,” noting that “The second shock was the drop in oil prices.”

And the budget deficit, which stood at 23 trillion dinars Zebari said that “the government will finance the deficit through treasury bills and government bonds and borrowing from local banks.”

Zebari said he “expects oil prices to rise in 2015 and that any surplus revenue will be spent on investment projects.”

The Council of Ministers approved in its meeting today on the budget, which amounted to 123 trillion dinars [$ 103 billion] deficit of 23 trillion dinars with the composition of the committee headed by him to the prime minister Haider al-Abadi, to review and re-formulations of some budget items legally. ”

After the committee meeting scheduled on Wednesday to refer the budget bill to the House, which has Alnwab- Batlth Alchrieih- for approval after the President of the Council, Salim al decided Thursday after a special meeting of the budget.

The preparation of the draft budget for 2015 the law has been postponed last month with the continued decline in oil prices was supposed to originally include the price of crude to $ 70 a barrel next year, but has been reduced to $ 60, and are trading Brent crude oil futures above $ 60, down from $ 115 in June .anthy

Twilight News sources from the oil sector and data Shipping / said that Iraq’s oil exports rise in December towards record levels, with increased production of the country’s second-largest producer in OPEC, despite oil prices trading near their lowest levels in five years.

Shipping data showed three of the twenty-first day of December, monitored by Reuters and seen by the “Twilight News” that exports from the ports of southern Iraq amounted to no less than 2.6 million barrels per day on average. He gave two sources in the sector exports watching similar estimates.

A source in the sector noted high flows south to 2.8 million barrels per day in the part of the month, “This looks very large quantities .. huge quantities.”

It produces most of the southern ports of Iraq’s oil is the main port of Iraq to world markets. These ports are located away from areas of the country controlled by Daash continued to export despite the unrest.

Two sources said the sector Oil Marketing Company (SOMO) of Iraq issued about 180 thousand barrels per day from Kirkuk in the north of the country since the beginning of December. And exports crude via the Kurdish pipeline to the Turkish port of Ceyhan after he was the oldest pipeline repeated attacks.

This brings the total of Iraq’s major raw materials exports about 2.78 million barrels per day, just shy of 2.8 million barrels a record level in February, such as flows from the Kirkuk oilfields stopped by pipeline to the port of Ceyhan because of a bomb attack.