Washington (CNN) – Combat strikes against ISIS have put the terror group on the defensive, the commander of US military operations against ISIS said Monday.

“(ISIS) operationally is probably on the defense to hold what they have gained,” Gen. James Terry, commander of Operation Inherent Resolve, told reporters in Kuwait.

Coalition airstrikes have caused ISIS to have difficulty moving and communicating.

“Initially we saw a lot of movement … with technical vehicles, heavy machine guns,” he said. “It was a very mobile force but quite frankly when they stick their head up now, we make sure that capability is degraded.”

Still, he said the group is “able to conduct some limited attacks” to support their messaging.

Countries in the region and NATO members will send an additional 1,500 troops to combat ISIS, which Terry called a “threat to region.” The additional forces will be there to “build partner capacity,” meaning training Iraqi security forces and advising and assisting operations. The United States already has 1,500 American troops in Iraq.

The pledge was made during what he called an “outstanding conference” in the region held December 2-3.

Terry said he did not currently see the need for US ground troops in the form of ground controllers for airstrikes or forward deployed operations, but like Joint Chiefs Chairman, Gen. Martin Dempsey, Terry said should the need arise, he would “certainly ask for it.”

The focus now, he said, is on balancing the commitments from other nations.

“A lot of coalition members come together with different capabilities,” he said.

Iraqi security forces on the ground are also making progress, conducting 15 operations so far, including the recapture of the Mosul dam and the Baiji oil refinery, two key infrastructure targets.

Still the commander said they could still be months or years away from launching major offensive operations.

“While they still have a long way to go, I think they are becoming more capable everyday,” Terry said.

Arbaeen is coming up in challenge to ISF-“@TheStudyofWar: Iraq SITREP map for the day is out! http://iswiraq.blogspot.com/2014/12/iraq-situation-report-december-8-2014.html … ” 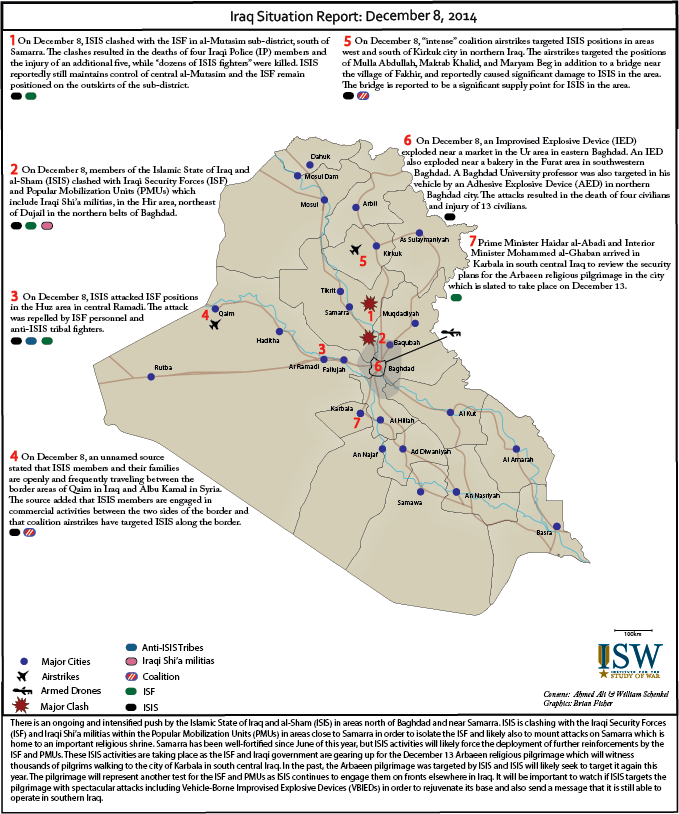 Did I mention Combined Joint Task Force – Operation Inherent Resolve is now on Twitter? Check them out right here: @CJTFOIR 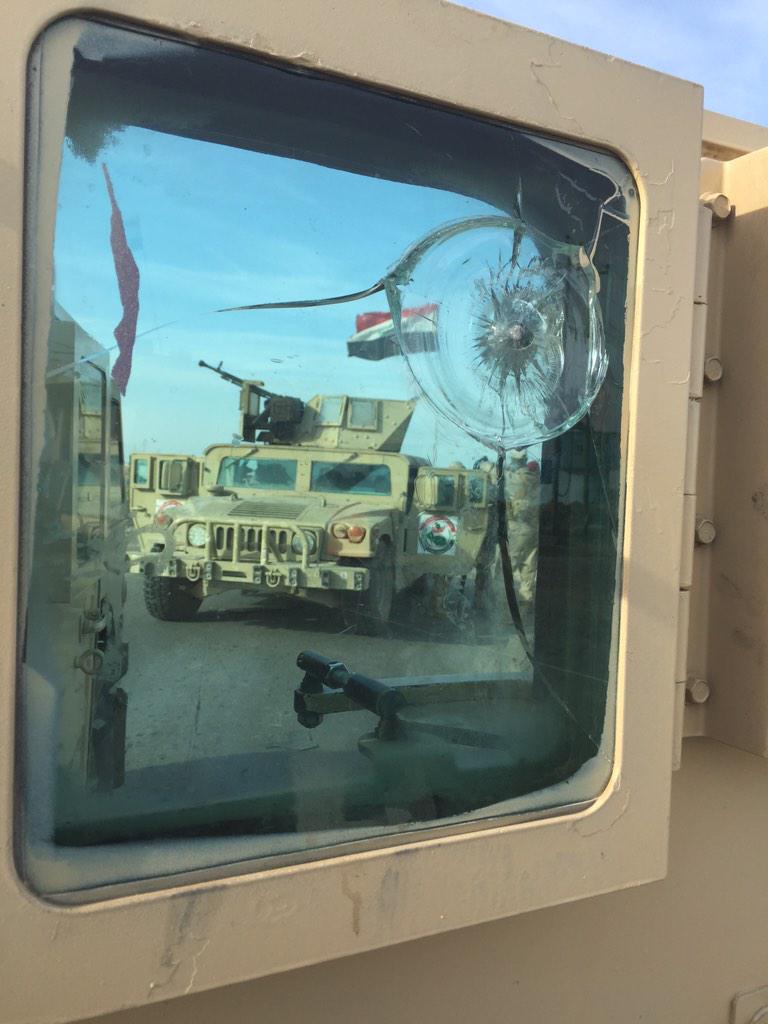 said the Lebanese MP Walid Jumblatt on the smuggling of Iraqi public money by the son of Nuri al-Maliki called “Ahmed” This money is not to support the Syrian refugees or help the Lebanese people are even stealing clear,

he added Jumblatt in tweet him on stringing Ban on Iraqi government to take the required measures to restore the money to the state treasury.

who threw the Lebanese security forces arrest and possession billion and a half billion dollars in a Lebanese homes and two people with him.

The source added that the security forces are still investigating the matter, noting that the go-Maliki to Lebanon is to settle the issue with the Lebanese security agencies, which mediates views Lebanese influential to resolve the issue in the forefront of the Lebanese Hezbollah,

led by Hassan Nasrallah, the source confirmed that Ahmed Nouri al-Maliki is currently in house arrest by order of the investigative committee, the source said al-Maliki and his son possess large cash liquidity in one Lebanese
banks that were shifted from Iraq to Lebanon by an Iraqi banking companies,

confirmed the Iraqi banking sources that this is not the first time carried out by Ahmed al-Maliki converts like so exaggerated Huge from Iraq to other countries, where the source in the Elaf Islamic Bank,

said the bank where he works has transferred more than three billion dollars to account Ahmad al-Maliki and other characters belonging to the Dawa Party, the ruling at the beginning of 2014, when al-Maliki was prime ministers from Iraq,

which was confirmed by one diplomatic personalities working in the embassies of Iraq in one of the European countries,

where he said that information and were beaten on the transfer of an amount exceeding one billion dollars from Iraq by Islamic Elaf Bank in Basra to Ahmed Nouri al-Maliki and Yasser Ckal and Aburahab account (by marriage Maliki) in that European country.

Kuwait’s ambassador to Iraq, Ghassan Al-Zawawi that “the integrity of Iraq, he said represents the support of the national security of Kuwait.”

He said in a press that “the international community wants to see a unified and coordinated internal Iraqi positions is part of providing adequate support for Iraq at all levels,” a statement.

He pointed out that “Kuwait also interested in other core files that operates as a displaced Iraqis.”

The Kuwaiti ambassador expressed “serious desire to Kuwait to help Iraq to overcome the crisis of displaced people” .anthy

The Iraqi Oil Marketing Company Sumo Monday that Iraq cut the official selling Basrah Light crude destined to Asia and the United States for download in the month of January next price but slightly raise the price of crude destined for Europe.

This comes after Saudi Arabia held a sharp cut to the official selling price of crude going to Asia and the United States last week.

Analysts and traders believe that the two are competing to keep the share of each of them in a market saturated with supplies supply.

Sumo and reduced the official price of Basrah Light crude destined to Asia to download next month to the average crude price of Dubai and Oman minus four dollars a barrel equivalent of minus $ 2.15 a barrel in this December shipments.

Sumo official price of Basrah Light crude destined for the United States for shipments next month and reduced to the Argus index minus 40 cents a barrel from minus ten cents cursor in this December shipments.

Sumo also raised the price a bit crude destined for Europe equivalent to the immediate Brent crude minus $ 4.35 a barrel to ship next month, compared with the equivalent of minus $ 4.45 for shipments this month.

It is said that Iraq suffers from a difficult economic situation because of the shortfall in the budget year 2015, which is estimated according to Finance Minister Hoshyar Zebari at about $ 40 billion, to coincide with the fall in world oil prices, which make up 90 percent of Iraq’s imports.

As Deputy Prime Minister Bahaa al-Araji revealed to [where] the arrival of the special protections of the expenses of the officials’ salaries and equipment to one billion dollars.

In an attempt to cut costs by reducing the cabinet initiated salaries, including his boss and his deputies to 50% has also taken Riasta Republic and the House of Representatives a similar step in addition to the citizen Bloc study with a coalition of state law for the step.

The Council of Ministers is working on the preparation of the budget and revised to reduce the ceiling price of oil from $ 70 to $ 64 or less to meet the deficit.

Hoshyar Zebari, Minister of Finance also revealed that, on Friday, in a press statement about the intention of his ministry reducing the budget in 2015 to 120 trillion dinars, after it was 155 trillion dinars to reduce the deficit through a review of its provisions with the Ministries of State, and the search for domestic sources to reduce the deficit rather than foreign borrowing .

Finance Minister explained that “a large deficit in the budget requires us rationalize spending in order to be accepted and be under the roof of 30 trillion dinars because the current figure for the deficit of 47 trillion is too big,” he said, adding that “the reduction will focus on the part of the investment budget and some of the projects and some of the things other. “

And that “there is a debate about the calculation of the price of a barrel of oil in the budget between 60 to $ 70,” following up “We are committed to a price of $ 70 a barrel for the expected increase in oil prices because of the winter.”

It is said that the Oil Ministry announced Monday that the statistical initial oil exports for the month of November last achieved a rise in the average daily quantities of exported crude oil compared to previous months, reaching 2.51 million barrels.

The spokesman said the ministry, Assem Jihad said in a statement received [where] a copy of “the amount of total exports amounted to 75 million and 310 000 barrels revenues amounted to five billion and $ 250 million based on the price of $ 70 and 4 cents per barrel” .anthy

Baghdad (AIN) –The Ministry of Oil announced that the latest agreement between Baghdad and Erbil over the oil issues will not replace the Oil and Gas law draft.

The spokesperson of the Oil Ministry, Asim Jihad stated to AIN “The latest deal between Baghdad and Erbil over the oil issues will not replace the Oil and Gas law draft that will be endorsed by the parliament soon where Iraq needs such laws to organize the performance of this sector.” /End/

Shafaq News / The Speaker of the Iraqi Parliament , Saleem al-Jubouri said that the anticipated interrogation to undergo to the former Iraqi Prime Minister , Nuri al-Maliki in the Parliament, will not only be limited to the collapse of Mosul and its fall into the grip of “ISIS” terrorists.

In response to Iraqi parliament speaker , Salim al-Jubouri on a question to “Al-Watan” Saudi Newspaper about the next step of the Iraqi parliament to follow in the military institution file and potential calling for Nuri al-Maliki, he said, “We have formed a committee to search for the causes of the fall of Nineveh, security, political and military leaders involved in clearly. If we find an importance requiring talk with the Prime Minister , definitely he will come to the parliament.”

Jubouri said that the Parliament has already informed the former Iraqi prime minister about this desire, pointing out that it will include the fall of Nineveh and other topics.

This comes at a time the commission formed by the Iraqi parliament, and includes MPs from the ministries of defense and human rights, in addition to members of the Security and Defense Committee in Parliament and provinces of Nineveh, Salahuddin and Anbar started investigations to reach the reasons for the fall of Mosul city in Nineveh province by ISIS organization and held accounting to military leaders, for negligence.

The governor of Nineveh has hold in previous statements the former Prime Minister, Nuri al-Maliki and his military commanders responsibility for the fall of Mosul, confirming the presence of parties linked to al-Maliki trying to delay the work of the relevant parliamentary committee to examine the causes of its fall.

Nujaifi stressed at the time that “the responsibility of the fall of Mosul to al-Maliki as he was commander of the armed forces and the owner of the only decision to move the army and issue commands,” calling for the formed investigation committee by the parliament to implement its duty away from the political and partisan pressures seeking to disrupt their work to protect the one who was the direct responsible for the fall of Mosul.